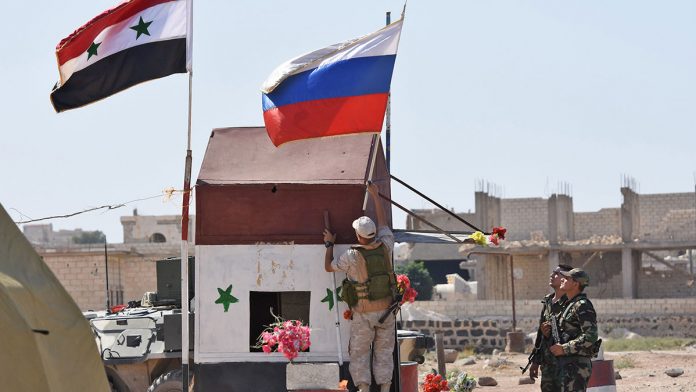 After the US administration said this week it believes that Russia is now trying to recruit Syrian fighters to bolster the Russian war effort in Ukraine, first investigation on the ground by MENA Research Center can confirm the efforts made by the Assad regime in cooperation with Russia, hiring Syrians close to the Syrian administration for a fight in Ukraine.

Also, informations received by MENA Research Center suggest that the Turkish government, controlling the Northern regions in Syria, is trying to recruit volunteers for fighting together with Ukrainian forces in the invaded country.

“The accounts of the Russians seeking Syrian fighters, to augment their forces in Ukraine, we do believe there’s truth to that,” Pentagon spokesman John Kirby told reporters.

Local investigators of MENA Research Center in Syria now found first evidence of possible recruitment efforts by the Assad regime, together with propaganda material. During the last days, more and more posters appear on the streets, underlining the “Syrian support of Russia” for the invasion in Ukraine.

Meanwhile, Syrians with military knowledge are asked to serve as “guards” in Ukraine. They were told that the engagement would include the protection of Russian military locations in the country, underlining that the Syrians would not be forced to be involved in direct fights. (our sources confirmed that those fighters will be involved in direct fights) The “voluntary work” for the Russian army would be paid with USD 1,000 per month.

According to our sources, Russian army officials are targeting mainly members of special Syrian forces, not ordinary soldiers, promising them USD 7,000 for the total of seven months. When signing a contract with the Russian army, they would be excused by the Syrian regime for leaving the forces for that time period, not allowed to return to Syria during that time. As for now, 23,000 possible volunteers already agreed to support the Russian invasion in Ukraine

Volunteers are mainly targeted within two special forces in the Syrian military: the Al Bustan Special Branch, established by Rami Makhlouf the cousin of President Assad back in 2011 and the National Defense Forces of the Syrian army.

Still, the Russian recruiting effort is the latest sign that Russia’s invasion of Ukraine is not going as planned.

The US Pentagon says Russia has now deployed “nearly 100 percent” of the combat forces that it had positioned near Ukraine’s borders in advance of the war, which is now in its 12th day.

There are no signs at present that Russia is moving forces from other parts of Russia toward Ukraine, according to the Pentagon.

Russian leader Vladimir Putin sent the Russian military in 2015 to support Syrian President Bashar al-Assad in that country’s civil war, and the Russians remain there to this day.

The Russian military in Syria consists mostly of air force units that have carried out airstrikes. They were involved in a devastating bombing campaign in the northern city of Aleppo in 2016 that flattened many neighborhoods and resulted in large numbers of civilian casualties.