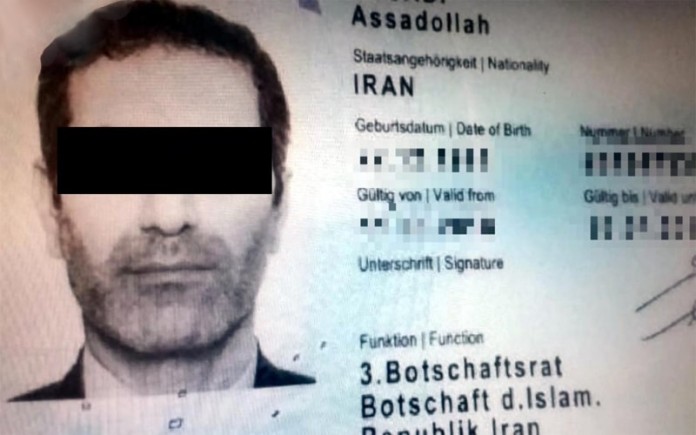 In the trial of the failed bomb attack on a mass rally by Iranian opposition activists in exile in France in 2018, the main defendant was sentenced to 20 years in prison. The 49-year-old Assadollah A. was responsible for the plan to attack the event of the National Council of Resistance (NCRI) in Villepinte near Paris with thousands of participants with an explosive device, the judges ruled. It is the first time since the Islamic Revolution in Iran 1979 that a government official in the EU has stood trial and been convicted of terrorism. Three other accomplices also received long prison terms.

The ruling is likely to cause considerable problems in the already tense relations between European states and the Islamic Republic and make diplomacy with the regime in Tehran more difficult. After the change of power in Washington, the EU is hoping to be able to revive the nuclear agreement that President Donald Trump has terminated in order to then negotiate the regime’s regional policy and its missile program with Iran.

The judges unconditionally upheld the prosecution’s request for a conviction of attempted murder and involvement in a terrorist organization. The government in Tehran vehemently rejects the allegations and declares that the terrorist plans were staged by opponents of the regime. There was initially no reaction from her.

A representative of the public prosecutor, however, spoke of a “historic judgment”. The court considered it proven that Assadollah A. was supported by the Iranian leadership. According to the investigation, Assadollah A. was an employee of the Iranian intelligence ministry, which observes and combats opposition groups in and outside Iran. The regime in Tehran regards the NCRI as a terrorist organization.

The verdict is tantamount to confirming that Iranian government agencies are organizing terrorist attacks in Europe. This is unlikely to remain without political consequences, such as imposition of new sanctions by the EU. Similar attacks in earlier decades had resulted in numerous deaths in Europe. In Germany, four Iranians, who were connected to the Iranian Kurdish party PDKI, were shot dead in an attack in the Berlin restaurant “Mykonos” in September 1992.

In Germany, the security authorities are now investigating whether Assadollah A. also had helpers in there. The Federal Prosecutor was conducting its own preliminary investigation against the Iranian.

Assadollah A. had threatened the Belgian police that armed groups controlled by Iran in the Middle East would be closely monitoring the outcome of the trial. This fueled the security authorities’ concerns that Iranian special forces or allies such as Hezbollah could also seek revenge for a conviction in Europe.

In addition, the authorities see an increased risk, especially for dual nationals, when traveling to Iran. The German Foreign Ministry has tightened warnings and advises people who also have Iranian citizenship against unnecessary travel. In the past, dual nationals were arrested several times and often for no comprehensible reasons, most recently in October 2020. In the past, Iran tried to exchange foreigners imprisoned in Iran for Iranians who were involved in terrorist attacks or violated sanctions abroad were in custody.

The convicted was arrested on July 1, 2018 in Germany at a motorway service station between Würzburg and Aschaffenburg. A European arrest warrant had been issued against him. The day before, the police in Belgium had arrested a couple of Iranian descent who had a bomb in their luggage on information from a secret service.

According to the Belgian investigators, it consisted of 550 grams of the highly explosive TAPT and an ignition device. Assadollah A. is said to have given it to the two of them shortly beforehand in Luxembourg. According to the Belgian police, it was professionally built and could have caused a significant explosion at the event in France, which was attended by more than 20,000 people, including Trump’s personal lawyer Rudy Giuliani.

Assadollah A. had invoked his diplomatic immunity and refused to participate in the process. According to the Vienna Convention, diplomats only enjoy immunity in the country in which they are accredited – in Assadollah A.’s case, Austria, but not Germany or Belgium, where he was extradited.

The Antwerp couple who should have carried out the attack were also convicted. Belgian special forces had stopped and arrested the two on their way to France. According to the court spokeswoman, the man has now been sentenced to 15 years’ imprisonment, his wife to 18 years. Another man is said to be imprisoned for 17 years.

The three helpers of Assadollah A. will also have their Belgian citizenship revoked. The court also ordered the confiscation of money that the accomplices allegedly received from the Iranian secret service, a total of more than 450,000 euros, according to the court.