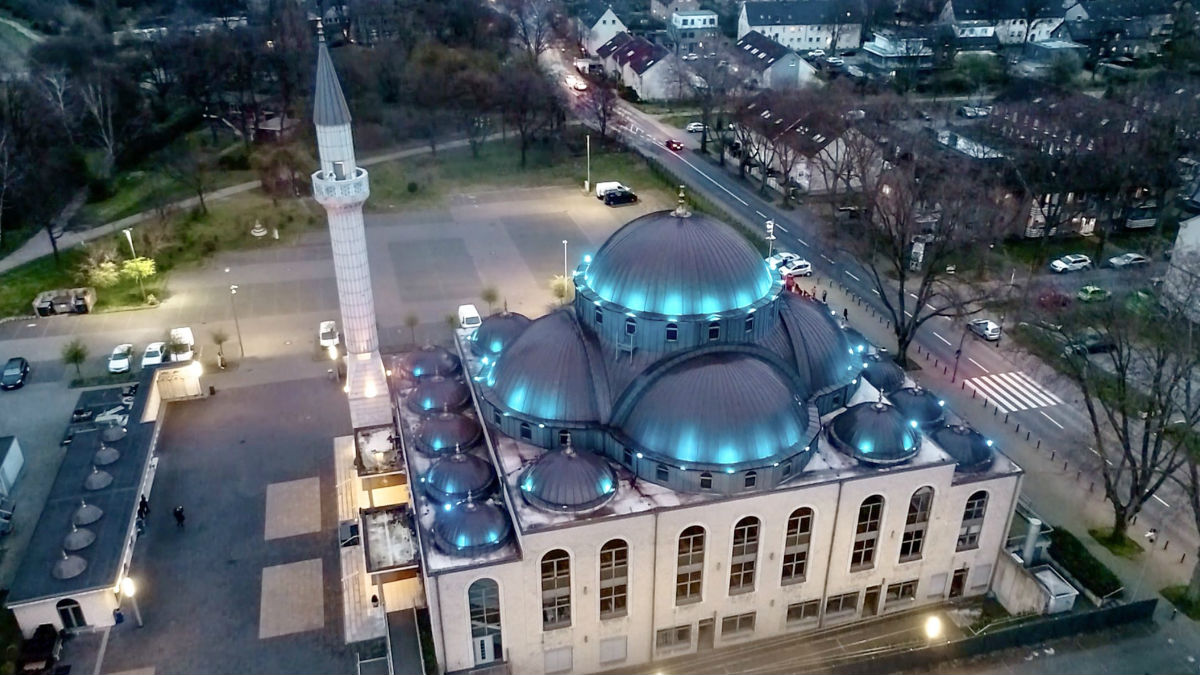 Abdul-Wached Niyazov was delighted when 300 people romped in front of the mosque of a Berlin community center in early April, causing a scandal: “Alhamdulillah, very good news,” the Russian president of the Islamic European Muslim Forum (EMF) wrote on Instagram. He shared a video of the campaign with his 175,000 subscribers: crowds of people around the mosque area in Berlin, in between the police and an official who tries somewhat helplessly to break up the groups.

Niyazov cheered: “For the first time in Germany’s history, Berlin authorities have allowed the public call to prayer to be played over loudspeakers.” He ignored the fact that the police initiated proceedings, after the open air prayer was canceled and the district prohibited the public call to prayer. Instead, he posted a picture with the imam of the controversial Berlin mosque, Mohamed Taha Sabri. Niyazov wrote: “It is no coincidence that we are discussing a possibility of placing our Berlin representative office in this mosque.”

Obviously, Niyazov’s worldwide active European Muslim Forum (EMF) is striving to gain a foothold in Germany. The EMF, founded in Barcelona in October 2018, defines itself as the association of Europe’s leading Muslim representatives. A statement said that the increased importance of Muslims in public, cultural and economic life was to be represented. With representations in cities such as London, Istanbul or Moscow together with clear goals: building mosques and Islamic cultural centers, developing the halal industry, strengthening Muslim youth.

Investigations by WELT show that a close look at the representatives of the EMF is worthwhile: not only connections to dictators and gay haters worldwide are obvious, but also to an Islamist institute in Hamburg and to controversial organizations that are close to the Turkish government. Almost all of these stripes come together in one man: EMF President Niyazov.

Abdul-Wached Niyazov, born in Omsk, Russia , is a dazzling figure and not picky about friendships. The President of the Islamic Cultural Center of Russia (ICZR) likes to present himself as an Islamic statesman of the world. Wherever he appears, he shakes the hands of the powerful in front of cameras – whether autocrat, dictator or Islamist.

On his Facebook page from February 26, 2019: Photo series with Recep Tayyip Erdogan. March 3, 2019: Posing with Chechnya despot Ramzan Kadyrov. On February 27, 2019: souvenir photo with Libya’s ex-dictator Gaddafi. The German Intelligence Service of the Interior (BfV) also referred to a connection between Niyazov and the Islamist Muslim Brotherhood (MB).

In addition to pictures showing elementary school boys in prayer caps lined up during Quran classes, he published the screenshot of a message on Facebook about new laws on the execution of homosexuals in Brunei on April 7, 2019. Niyazov’s comment: “Exactly like that!”

From now on men under Islamic Sharia law were stoned. Only after global protests, the sultan withdraw the law months later.

Since the establishment of the European Muslim Forum (EMF) in Barcelona in October 2018, the Islamic representatives have held further meetings in Paris in late 2018, in Hamburg in March 2019 and previously in Istanbul. Chechnya dictator Ramzan Kadyrov also joined the delegation there, which the EMF emphasizes on its website. Kadyrov, a feared dictator, has systematically tortured homosexuals in the North Caucasus according to human rights organizations, and hunts for political opponents, including journalists.

In addition to President Niyazov, the EMF is represented by several muftis and other Islamic dignitaries from different countries. There are several connections to Germany. At the end of November 2018, Niyazov posed in front of a European Commission building at an EMF meeting with four men. One of them: Tarek Baé, 26 years old and no stranger to Islamic circles in Germany.

Baé, who describes himself as a media scientist and journalist on Twitter, has appeared several times as a representative of SETA. The Foundation for Political, Economic and Social Research is considered a political think tank with close ties to the Turkish government. “For example, government spokesman Fahrettin Altun and the adviser to the Turkish president, Ibrahim Kalin, were previously active at the SETA Foundation,” BfV reports.

SETA underpins the foreign policy of the Turkish governing party AKP with strategy papers. It is also interesting in the context that Baé has spoken several times to organizations of the Turkish mosque association Ditib. At one of these events, he lectured in 2018 on the topic “Right-wing populism and Islam in the media”.

Murat Guel from Berlin is also listed on the EMF’s “board” as the official representative of the organization. He is President of the Islamic Federation Berlin (IFB), which is said to be close to the Islamist Milli Görüs movement. When Niyazov came to Berlin for an advertising tour in April 2019, Guel was always close at his side. Together they posed in front of the Bundestag with the Imam of the Christchurch mosque, Gamal Fouda. His mosque had been one of the two targets in the New Zealand attack.

Niyazov also maintains questionable contacts with Germany outside his global Islam forum. Most recently, he published videos of the Al-Azhari Institute from Hamburg on Instagram, a photo with the institute’s head Mahmoud A., who speaks an Islamic confession to a headscarf wearer. Niyazov’s jubilant comment: “During a pandemic in Europe, people come to the truth and convert to Islam. We have a new sister in Hamburg!”

According to its own statement, the Al-Azhari Institute promotes “inter-religious dialogue” through Koran and language classes for children and adults. But only a few weeks ago, Hamburg’s Intelligence Service raised the alarm. The Al-Azhari Institute is striving for an Islamist social order, it said. Mahmoud A. praises the Sharia rules and represents radical Islamic ideas. Accordingly, a woman must obey her husband. If warnings are unsuccessful, violence can be used as a last resort.

In a video on “Marriage in Islam” from the end of March, A. raves that the “religious woman” is the best. Because: “It doesn’t make life difficult for you. If the man demands something from her, then she is obedient to him.“ Elsewhere, A. criticizes the alleged lack of belief in Germany. There are far too many “Haram looks” on the streets here.

Hamburg’s intelligence also notes: “In the lessons of Mahmoud A. there is also a clear anti-semitism.” CDU interior politician Christoph de Vries calls for further consequences for the institute: “The Islamist propaganda of Al-Azhari Institute, Mahmoud A., is unbearable and anti-democratic, the teaching activities of the institute must be discontinued immediately and a ban on associations pursuant to Section 3 Paragraph 2 Number 1 in conjunction with Article 9 of the German Constitution must be examined.”