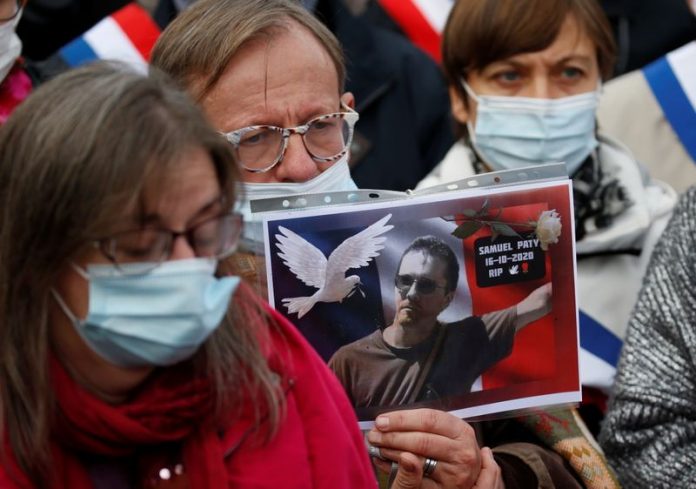 France reacts very clearly to the beheading of a teacher in a Paris suburb: Deportations from the country are to be increased, and suspicious associations are to be dissolved. French Interior Minister Gérald Darmanin reported on Monday that 231 illegal immigrants suspected of Islamist radicalization should leave the country as soon as possible.

He had already announced this intention, but now the local authorities have been instructed to carry out the deportations “within hours”. Since the weekend, political calls for decisive action, which this time should not be limited to rhetoric, have been increasing even from the highest level. “The Islamists will not sleep soundly in France. Fear will change its place, “said President Emmanuel Macron, according to the Elysée Palace, on Sunday evening at a meeting with the ministers responsible for defense and internal security.

After the murder of the teacher Samuel Paty by an Islamist terrorist last Friday, not a few French people are wondering whether the familiar processes are now starting again, as they have been after previous attacks: shock, sadness, anger and the announcement of martial measures, but either not completely implemented or without desired consequences. The right-wing politicians feel vindicated: “Samuel Paty has been let down by his superiors and the state,” said Marine Le Pen on Monday, calling for all foreigners suspected of being radicalized to be deported without exception. Prisons should also be set up for radicalized French citizens and the police should be more heavily armed.

According to Interior Minister Darmanin, the police carried out investigations on Monday into 80 people who expressed their support for the attack on the Internet. In addition, around 50 Muslim clubs are now to be carefully examined, in some cases banned. Darmanin specifically named the “Collectif contre l’islamophobie en France” (CCIF), an institution that opposes discrimination against Muslims. The organization was “demonstrably involved” in the events that led to the murder of the teacher, the interior minister said. The father of a child from the school concerned, Brahim Chnina, had called in a video for mobilization against the teacher after he had shown his students Mohammed cartoons. Chnina announced to turn on the CCIF.

The collective, subsidized by the French state and another association called Barakacity are “enemies of the republic,” according to the interior minister.

Meanwhile, moderate Muslims in France welcomed the crackdown on the organizations. The country must finally wake up, because “the manipulation of the Islamists in France is very strong,” warned Hassen Chalghoumi, an imam from the Paris suburb of Drancy. A few years ago, he was confronted with demonstrations by radical Muslims organized by the activist Abdelhakim Sefrioui. Sefrioui is close to the terrorist organization Hamas and took part in demonstrations in France calling for a “holy war against Israel”. Sefrioui is now in custody in connection with the teacher murder. He was in contact with Chnina, went to school with him to complain to the management about the teacher, and probably made the video, which quickly spread on the Internet.

The eighteen-year-old assassin, the Moscow-born Chechen Abdoullakh Anzorov, also came across the video in his home town of Évreux. As reported on French television on Monday, the assassin had made contact with Sefrioui and China. Last Friday, Anzorov drove from his home to the school in Conflans-Sainte-Honorine, offered a student several hundred euros so that he could identify the teacher. The Chechen then took action and was shot by the police shortly afterwards.