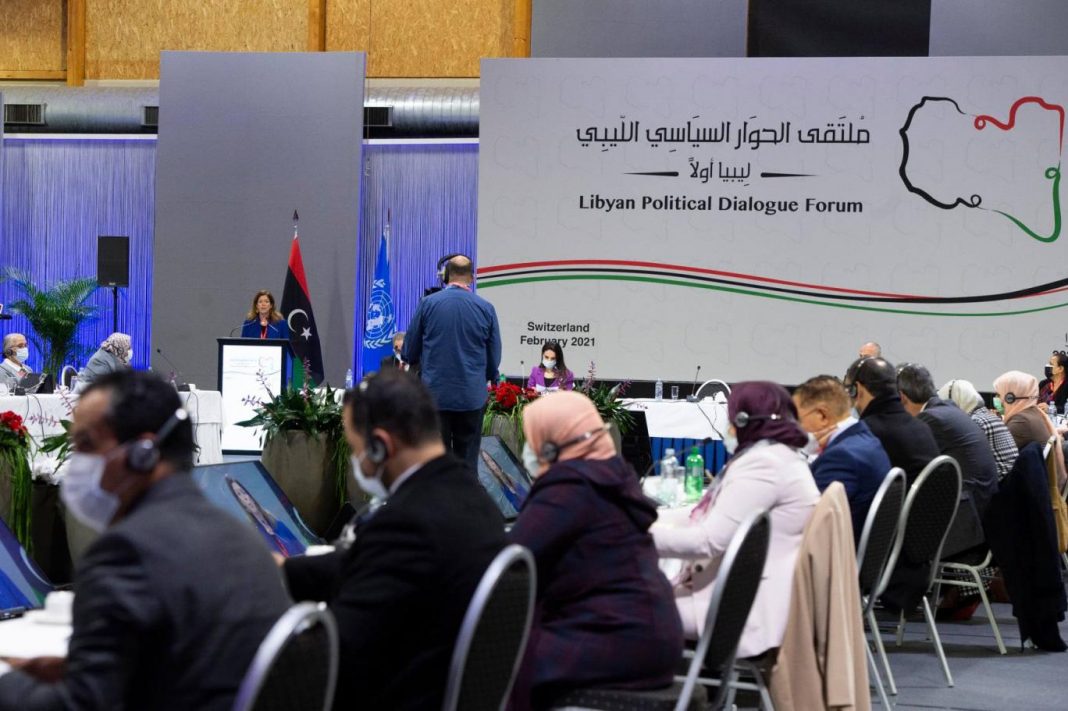 The seventy-four members of the UN-led Libyan Political Dialogue Forum (LPDF) on February 5 elected a three-member Presidency Council headed by Mohamed al-Mnefi and a Prime Minister, Abdelhamid Dabeiba. This new executive is tasked with forming a Government of National Unity, that will in turn prepare Libya for general elections in December 2021. However, the UN-led negotiation process to elect the new executive body, which was meant to disempower an entrenched and unaccountable elite, instead rehabilitated this very elite—allowing them to dominate the talks and shape its outcome. The agreement will reshuffle access to spoils among this political class, enabling its proponents to cling to official positions, and giving them an incentive to block progress towards elections.

The negotiations eschewed all substantive disagreements between Libya’s conflicting parties—such as the question of who should lead a unified army, or how to ensure accountability for crimes committed during the wars of the past years. Instead of forging a political consensus as a basis for a unified government, the process relied on majority voting among the forum’s seventy-four members. As a result, no common political vision unites the four people who have been elected to lead the new executive. Their only common interest was mobilizing the necessary votes, which required gathering support from disparate local factions and individuals. Each of the four will now come under pressure from competing factions to reciprocate with appointments in the new government. This bodes ill for the new executive’s ability to work with a common purpose.

Majority voting meant that the process has produced many losers—too many for an executive that claims to be a unity government. The winning team obtained 53 percent of votes in a forum that is itself hardly representative of Libya’s political and military landscape. As a result, the new executive stands on an extremely narrow footing.

Almost half of the LPDF’s participants are members of one of the country’s two rival parliaments. Over the past seven years, they have gained notoriety for vetoing political solutions that would cause them to lose their privileges and came to embody the political class the UN now ostensibly seeks to disempower through the LPDF. In most cases, their voters stopped seeing them as representing their interests and concerns years ago. Other delegates were handpicked by the UN to ensure particular powerbrokers or constituencies were represented, or to accommodate the foreign powers involved in the Libyan conflict. But on the ground, including among the armed groups that fought in the most recent civil war, the forum is widely seen as bringing together opportunistic, greedy politicians with little legitimacy or influence.

The three members of the Presidency Council personify this political class, having held various public offices since 2011. But they are also unlikely winners as they have no meaningful power base of their own and played no role in the recent conflict. By contrast, Prime Minister Abdelhamid Dabeiba is influential because he and his cousin and business partner Ali Dabeiba, a member of the negotiating forum, since 2011 used the wealth they dubiously amassed as public sector executives under Qadhafi to fund several armed factions in their native Misrata. Consequently, the new Prime Minister is a controversial figure.

Dabeiba and his running mates won not because they attracted strong support among the seventy-four, but because many in the negotiating forum sought to ensure the defeat of their competitors: a list led by the powerful Tripoli-based interior minister Fathi Bashagha, and the head of the east-based rump parliament, Agilah Saleh. Bashagha and Saleh, who were on opposing sides in the recent civil war, had made many enemies within their own camps, and their opportunistic alliance alienated many others. Instead of having heavyweights in the warring parties lead a new unity government, a majority of delegates opted to support a group that appeared amenable to bring them to the fold. Dabeiba also gained the backing of politicians and associated mafia-like militias in Tripoli and Zawiya who were on bad terms with Bashagha.

The fact that the winning team lacks a strong base and political affiliation could allow them to accommodate a broader range of factions, including some of the losers of the process. But this does not mean that the new executive can transcend Libya’s divisions. It merely means that competing factions seize the opportunity to share the spoils of Libya’s oil wealth and strengthen their respective clienteles and armed groups —much as they did in previous Libyan governments, including the Government of National Accord (GNA) formed in late 2015.

The most consequential aspect of the alignments around the new executive will be the stance of Khalifa Haftar, whose forces control eastern and central Libya. The head of the new Presidency Council, Mohamed al-Mnefi, is an easterner who has neither supported Haftar nor cut ties with him. Prime Minister Dabeiba is sufficiently opportunistic to explore arrangements with Haftar, who could try to use the new body to gain access to funds and place allies in government positions. At the same time, Haftar cannot afford to wholeheartedly accept the new executive’s authority; he needs enemies in western Libya to retain his control over the east. Haftar could maintain an ambivalent attitude towards the new body, occasionally veering towards open hostility, while maximally exploiting the opportunities the new structure offers.

Beyond such fragile arrangements, a deal to unify the command over Libya’s armed formations is virtually impossible. Distrust and the rifts of the latest war run deep. Western Libyan armed groups cannot accept a leading role for Haftar, while for Haftar his claim to single-handed leadership over the army remains non-negotiable.

More broadly, the fact that the negotiation process produced no meaningful political convergence means that institutional divisions are likely to persist. In trying to form a government, the process will run into the same problems that afflicted its predecessor, the GNA. The LPDF roadmap relies on one of the two parliaments, the House of Representatives, to endorse the new unity government. But the parliament is divided and has not met with the legally required quorum for years. The head of its eastern rump, Agila Saleh, following his defeat will likely revert to his strategy of blocking approval for a government he does not dominate. To work around this, the UNSMIL’s roadmap relies on the LPDF for an alternative endorsement. Yet brokering consensus within the forum might be an equally Sisyphean endeavor, particularly since the new government cannot reconcile the parochial demands of those represented at the forum with other actors it will seek to co-opt.

For both Saleh and Haftar, maintaining the eastern government in place will remain useful to limit the new executive’s influence, and retain separate funding streams. But even in Tripoli, the obstacles to government formation could make it difficult for Dabeiba’s ministers to take office, and acting ministers—among them Bashagha—may prove difficult partners for him.

Institutionalized disunity will leave Libya vulnerable to the influence of foreign powers. Russia, Turkey, and the UAE had ample opportunity to subvert the talks had they ever felt their influence threatened by a genuinely united government that would prioritize Libyan sovereignty and principles of non-interference. Instead, competing factions inside and outside the new government will continue to mobilize support from these very powers. Egypt’s reaction is less predictable, since it strongly supported Saleh, and may find its interests insufficiently represented in the new body. In general, however, foreign meddlers will seek to perpetuate Libyan divides while reaping the economic dividends that might come with ad-hoc arrangements to resume public expenditure.

While its weak power base makes it somewhat less likely that the new executive can hold onto power indefinitely, the factions that it will accommodate will seek to delay elections as long as possible. In addition, the plan to hold elections by December 2021 will also be stymied by the long-running disagreement over a constitutional basis for holding them. With the goal of elections remaining elusive, eastern factions that see themselves insufficiently represented in the new government may well stoke the rising separatist sentiment in the region. In Tripoli, factional competition within state institutions, including in the security sector, will fuel tensions—a pattern all too familiar since 2011. There is little reason to believe that Libya’s new “unity” government will be able to simultaneously avert both scenarios.