Al-Sadr.. signs of disagreement in his family due to his contradictions

Al-Sadr.. signs of disagreement in his family due to his contradictions

Demonstrations continued in the Iraqi street, rejecting the assignment of “Muhammad Allawi” to head the next Iraqi government, asking him to resign and apologizing for accepting the mandate, at a time when some parties affiliated with the Iraqi militias loyal to Iran continued their attacks on the demonstrators, where an Iraqi security source exposed tents. The sit-in in Dhi Qar Governorate and 3 other tents in the center of the capital, Baghdad, for burning by unknown parties.

In addition, Iraqi activists accused Sadrists supporters of calling themselves “blue hats owners”, to continue attacking demonstrators in public squares and places, especially in the city of Najaf, after inviting the leader of the movement, “Muqtada al-Sadr,” to help them with the Iraqi security forces by breaking up The sit-ins, which prompted the demonstrators to launch a campaign of “red hats owners” on social media, to condemn the attacks of the Sadrist movement on them.

It appears that the Iraqi denunciation of the maliciousness of Muqtada al-Sadr’s actions and moves woven by Iran from afar, exceeded the reaction of the street to reach the same family, the Sadr family, which is classified as one of the oldest Arab Shi’ite families among religious references and whose political leader Muqtada al-Sadr himself claims.

With al-Sadr declaring quick support for choosing Allawi as prime minister, he tried through his blue hats to terrorize the masses and force them to accept the last character according to what many followers of Iraqi affairs see. “The founder of the Dawa Party and the cousin of Muqtada al-Sadr, he tweeted, criticizing the blue hats and supporting only the state and its hats.

Leaked Iranian intelligence documents revealed the extent of Iranian interference and penetration within the Iraqi regime and its decision-makers. The document shows the close relations between senior officials in Iraq and the Iranian authorities

The controversy continued after that tweet, between denial and proof about the authenticity of the account in Twitter and the correctness of the Tweet “Jaafar Al-Sadr” with the creation of a second account with the same name that denies Twitter against the blue hats, so that the account returns and disappears, which increased the state of confusion in the media and press sites.

However, a source close to the Iraqi ambassador to London, Jaafar Al-Sadr, said yesterday, Tuesday, that unknown persons opened a fake account bearing his name on Twitter, and published a false denial there.

The source said in an interview with “Nass”, on February 4, 2020, that “unknown persons opened a false account on the tension in the name of Jaafar al-Sadr, and published a false denial therein.”

He explained, “Al-Sadr has not opened any new account on Twitter, and his old account is known, and he has follow-up of well-known religious and political figures, such as the prominent leader of the Sadrist movement, Ahmad al-Sadr.”

Ambassador Al-Sadr’s tweet received wide attention from followers in political circles and social media, while observers considered it a sign of disagreements within the Al-Sadr family regarding the position on the demonstrations and the controversy surrounding the role of the blue hats in it.

The source close to Jaafar al-Sadr said that the Iraqi ambassador in London was surprised by creating a new account in his name and publishing the denial therein, stressing that the new account was closed after reporting that he was a fraud.

But the source, in his interview with “Nass” agency, refused to comment on the position of Ja`far al-Sadr regarding the issue of the blue hats, or whether there were actually differences regarding it with the leader of the Sadrist movement, Muqtada al-Sadr, despite the many indications that support this trend.

Muhammad Ja`far al-Sadr is the only son of the religious authority, Muhammad Baqir al-Sadr, who founded the Islamic Dawa Party in 1957, and the cousin of the leader of the Sadrist movement, Muqtada al-Sadr, born in Najaf 1970. He is married and has four daughters and two sons. He has a master’s degree in science Sociology of Knowledge, Lebanese University, Higher Diploma in Sociology, Lebanese University .. University degree in law and comparative jurisprudence, Islamic University of London .. Religious studies in Najaf and “Qom” .. Fluent in English, Persian and Persian languages. He was a Member of Parliament in 2010 and currently holds the position of Iraqi Ambassador to Britain. 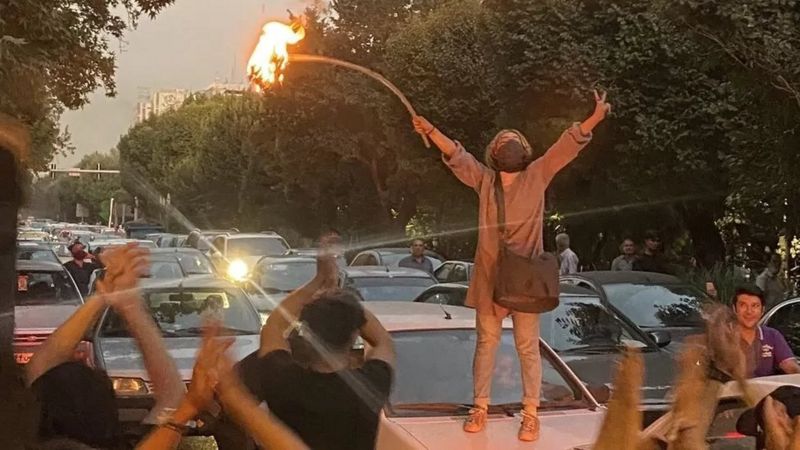 How do Shiites in Iraq and Lebanon regard what is happening in Iran?
Tags: Iraq
No Result
View All Result