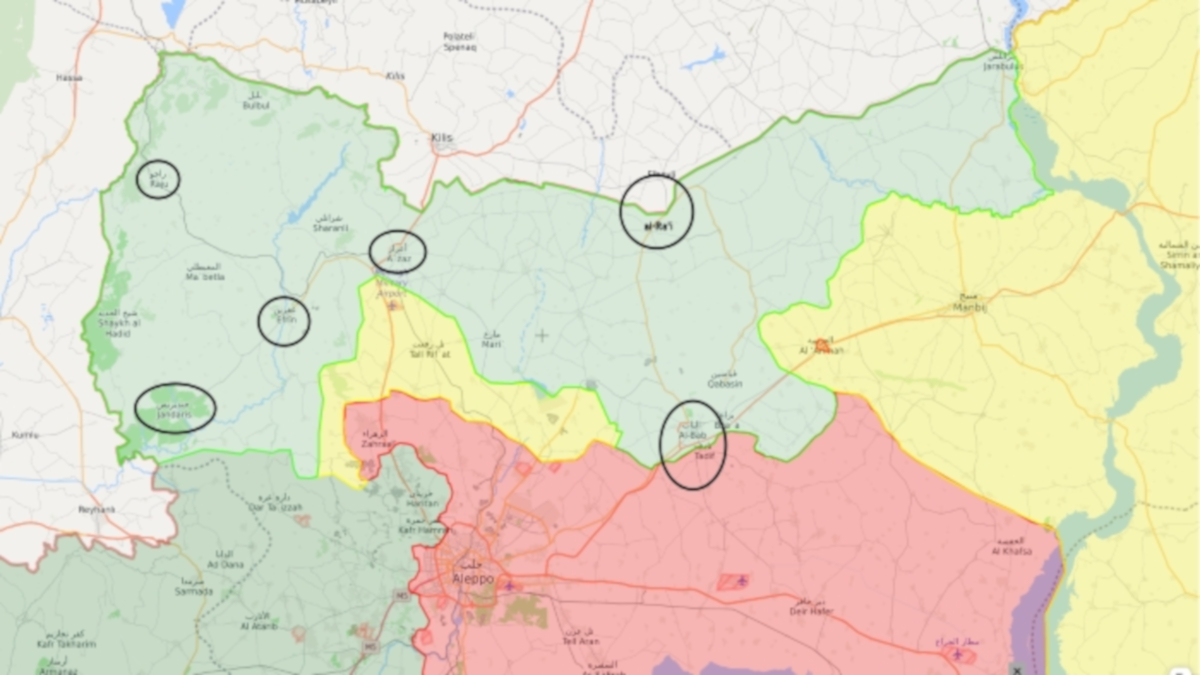 The areas of the Syrian north witness a notable development in constructions and services in the last two years, under the continuous Turkish support for what is now known as the area of “Euphrates Shield” which include the cities of Jarabulus, Azaz, Al-Ra’aie, Al-Bab and others.

By providing services embodied in the establishing of Turkish post offices, schools and industrial areas as well as urban areas, in addition to other projects that provide electricity, networks, higher education and road services, all this helped improve the living conditions of the people, whilst some people fear that those projects will lead to a complete Turkish control that removes the Syrian identity.

The area of Euphrates Shield has become a center of Turkish military check points that watch over the area, while Turkey keeps sending more military equipment to its borders with Syria, which transformed the border line to points of concentrated Turkish troops for hundreds of kilometers.

After Turkey has finished in last June building the border wall along the borders with Syria, the focus shifted towards concentrating the support to the area of Euphrates Shield more than before, at the same time when the two provinces of Gaziantep and Hatay were announced to be a security area subject to inspection.

The Turkish government keeps supervising the projects being established in different cities in the area of Euphrates Shield, also encourages Turkish businessmen to invest in the area by applying to biddings on the vital projects in the Syrian north that it announces.

Amongst the projects that were carried out by Turkish supervision, tens of medical points of clinics and hospitals and medical centers, to centers for the Turkish post PTT, and buildings for the courts and local councils, schools and industrial cities established with the latest technologies, as well as opening additional border crossings like Al-Raie’e and Afrin.

The Turkish businessmen organization MUSIAD opened an office in the area of Euphrates Shield with the aim to offer studies and counseling to businessmen willing to invest in the north of Syria.

Turkey also works on paving roads in the area in collaboration with the local councils, but what is interesting is that naming the streets and neighborhood has become in the Turkish language as well as in Arabic, and the Turkish flag can be seen on every service building.

Pictures of Turkish flags and dead Turkish soldiers that fought in the battles of Euphrates Shield missions and in Operation Olive Branch, and also pictures of the Turkish president all over the area.

The Turkish language has become the second language being taught in school curriculums, and days ago, millions of copies were sent to the north of Syria to supply schools, the process of handing out school books is being carried out by Turkish teachers in collaboration with AFAD organization which has branches in Afrin, Jarabulus, Al-Bab, Azaz, Marea, Akhtarin and Al-Raie’e.

While tens of thousands of Syrians began learning the Turkish language which gives them better chances to find jobs in the projects being carried out in the area.

The Turkish projects keep increasing in different fields leaving their marks in the area, at the same time Turkish officials prepare for another operation like Euphrates Shield, and Olive Branch operations but at East Euphrates this time.

The preparations to the new battle has already begin after the announcements of leaders in the free army to participate with the Turkish army, when the leader in Al-Hamza division stated that “We are making prepares for a potential military operation and we are training our troops for it.”

It seems like Turkey is planning to expand over all of the northern Syrian borderline while concentrating its security check points in the areas it controls and establishing the basic services in the new areas to bring life back to them.

Many are afraid of the consequences of this interference which can lead to a complete control over the area which is enforced by actions that happened recently.

Abdulgalil is a nom de guerre for a Syrian that asked not to show his true identity while interviewing him, he says “We so many things that raise our suspicions about the fate of the area, of which is when the Turkish forces prevented the displaced people from Southern Damascus to enter Al-Bab.”

He adds, “One of the things is the operation that was conducted in Ifrine in the past few days to arrest corrupt people in the free army, this is not the problem but the problem is in the fact that this was conducted by the Turkish intelligence.”

While many Turkish officials have visited cities and towns of Euphrates Shield to supervise the opening of service establishments and to overlook the way life goes in the area.

The Echo of the Street

Polls show that the majority of Syrians feel gratitude towards what Turkey is doing for the area from service projects to developing the infrastructure, but in return, they suspect in some of the actions being performed in the area.

Hussien Al-Ahmad, a young man living in Azaz says, “The general situation is getting better, Turkey offered what no other country offered to the Syrian people, but we expect from it to control the security and to end the existence of the groups and form one national army from the good members from them.”

Ayham, a young man living in Jarabulus says, “I don’t think that what is happening in the Syrian north is a Turkish occupation as much as it is an attempt to create a living environment in the area for Syrian living in Turkey to return to, we always see Turkish officials talking about the numbers of Syrians constantly.”

On the other side, many people showed their resent the adding of the Turkish language into the area, where Aref says. “Why putting the Turkish synonyms of street and neighborhood names on the signs, this drives us to be fearful of what might face the area in the future, where Turkey is trying to control it by providing services.”

Dalil is a Syrian young man that lives in Minbg, he says, “The interference of the Turkish army in the north of Syria and the policy it follows lead to more separation between the Arabs and the Kurds, here in Minbg, people are afraid of the Turkish interference though a battle and we don’t believe what is being said in the Turkish media most of the time.”

While Turkey seeks by leading political negotiations with the large powers, especially the US, to further expand in Syria on the excuse of fighting terrorism as Turkish officials always announce, while civilians in the area fall between the hammer of the Turkish army, and the anvil of the Kurds militias.