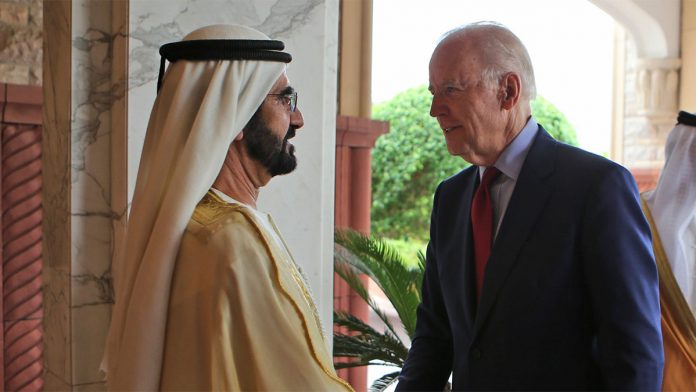 The recent decision by UAE not backing the UN Security Council resolution against the Russian invasion war in Ukraine, to some observers a surprising step, is probably the final signal that the Gulf monarchies are decoupling themselves from the United States.They are no longer just orienting themselves towards the East economically, but also politically.

The Crown Prince of Abu Dhabi, Muhammad Bin Zayed, was clear enough in a phone call on March 1, when conceded to Russian aggressor Vladimir Putin the right to “defend his national security.” Earlier on February 25, the Emirates abstained in the UN Security Council, like China and India, in a vote on condemning Russia.

For the Gulf monarchies, China is not yet a state that can guarantee their security. They are also counting on the economic power of China to ensure the stability of their most important energy suppliers in case of doubt. An Emirates’ political scientist said shortly after the Russian invasion of Ukraine that there would be more China in a “post-US era in the Gulf”.

The Emirates already share important interests with Russia. In Syria, they were the first Arab country to keep dictator al-Assad in power, last week, he visited Abu Dhabi. In Libya, the Emirates, like Russia, fought in vain for a military victory for rebel general Khalifa Haftar. And most recently, the oil minister of the Emirates has confirmed that the Emirates will adhere to the production quotas of the oil producers named Opec+. The group includes Russia.

Relations with the US have deteriorated. Washington is making conditions for the delivery of the coveted F-35 stealth jet to the Emirates, which they do not want to meet.

On the other hand, the Emirates have to be accused of the fact that the international institution for combating money laundering and terrorist financing, the Financial Action Task Force, put the United Arab Emirates on the gray list a few weeks ago. Apparently they are not complying with the request to identify illegal transactions. Almost all Russian investments in the Arabian Peninsula have been made in the Emirates.

The dissent between Washington and Riyadh has to do with the Saudi crown prince. Joe Biden is avoiding the crown prince due to his alleged role in the assassination of Jamal Khashoggi. Biden restricted arms sales to Saudi Arabia and removed the Houthis, against whom Riyadh is at war, from the terror list. Saudi Arabia and especially Muhammad Bin Salman warned early on that they would do business with Russia if Biden continued to override the crown prince.

The distance that the Gulf monarchies are keeping from the US is also becoming visible in the media. The news channel Al Arabiya, financed by Saudi Arabia, has mutated into an understanding of Russia. Sky News, which broadcasts from Abu Dhabi, is trying to remain neutral, and of all things Al Jazeera from Qatar represents the West’s position most clearly. It is striking that the chiefs of staff from Israel and Qatar recently met to discuss defense cooperation. Biden became the first Arab country to name Qatar a major non-NATO US ally.

An oil embargo against Russia would be difficult to enforce without support from Saudi Arabia and the Emirates. Because the hopes that Iran could replace part of the Russian oil after a revival of the nuclear agreement have been shattered. Hope has been dashed as the Kremlin made its approval conditional on being able to circumvent the sanctions imposed on Russia by allowing it to trade and invest freely with Iran. With this condition, Putin reacted to the US oil embargo imposed on March 8th.

This means that, alongside Saudi Arabia and the Emirates, Iran is also eliminated as a possible fill-in for Russian oil. The agreement could be reinstated without Russian consent. That would then have to happen outside the United Nations. Presumably, however, Iran would not take part in order not to alienate Moscow. A return to the nuclear deal has therefore become very unlikely, which is even worse news than the lack of oil. Because in the Middle East, uncertainties are increasing as Iran continues its nuclear program.