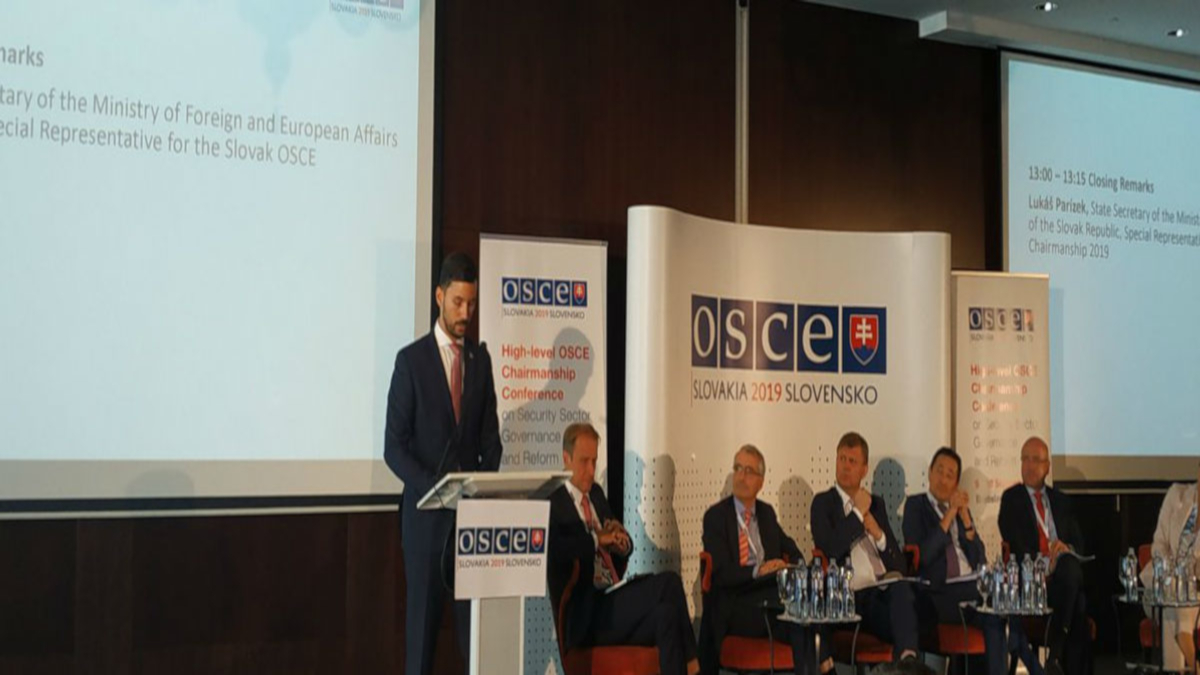 The recurring message at today’s opening of the annual OSCE-wide Counter-Terrorism Conference in Bratislava was clear: Strengthening co-operation among states and fostering partnerships between governments and civil society are key to countering terrorism and preventing violent extremism.

More than 400 political representatives, national counter-terrorism co-ordinators, senior policy experts, practitioners and representatives of civil society, business and academia from across the OSCE’s participating States and Partners for Co-operation gathered in Bratislava for a two-day conference to take stock of efforts to prevent and counter terrorism as well as violent extremism and radicalization that lead to terrorism (VERLT) in the OSCE area.

“Actions of violent extremists and tragic acts of radicalized individuals have become a virus infecting our societies, harming people and hindering peaceful development,” opened Lukáš Parízek, State Secretary of the Ministry of Foreign and European Affairs of the Slovak Republic/Special Representative for the Slovak OSCE Chairmanship, recalling recent incidents in Christchurch, New Zealand and Utrecht, the Netherlands.

“Countering terrorism and preventing violent extremism and radicalization is a key security commitment of OSCE participating States and remains one of the top priorities for Slovakia’s 2019 OSCE Chairmanship,” Parízek continued. “The OSCE is developing powerful, human-rights compliant counter-terrorism programmes, as well as platforms and mechanisms for government and civil society co-operation to disengage individuals from violent extremism and terrorism. This conference itself is an opportunity for representatives of participating and Partner States, together with parliamentarians, experts, civil society and business to foster multi-stakeholder approaches to preventing violent extremism and radicalization.”

Paul Bekkers, Director of the Office of the OSCE Secretary General, underlined that the conference provides an opportunity to discuss current trends such as home-grown terrorism, the rise of right-wing nationalist violence, and the return of foreign terrorist fighters and their family members. “These trends challenge existing policies and we must be frank and agile in our responses while retaining commitments to our values,” he said.

“We will discuss the pressing issue of rehabilitation and reintegration of former terrorism offenders and returning foreign fighters. After all, individuals are often returning back into the same environments which enabled their radicalization to terrorism in the first place. It is imperative that we find the right mix of responses to protect society and to help those willing to redeem themselves,” said Bekkers.

A more comprehensive and holistic approach is needed to preventing and countering terrorism stressed Michèle Coninsx, Assistant Secretary-General and Executive Director of the UN Counter-Terrorism Committee Executive Directorate (CTED), as she highlighted the Committee’s support to states and its co-operation with the OSCE.

“Terrorism must be fought on multiple fronts: Our policies and methods must also employ a broader perspective that is focused on developing close partnerships with civil society and private industry. Community engagement and resilience are also essential in responding to, and countering, the spread of violent extremism that leads to terrorism,” Coninsx noted.