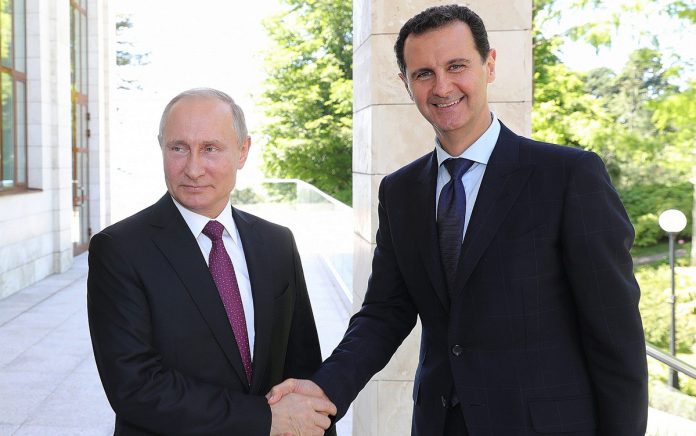 There is little doubt that Russia is trying to recruit Syrian fighters for the mission in Europe. Russia has opened agencies across Syria recruiting young men to serve in pro-Russian militias. The Russian mercenary group Wagner, which is closely linked to the Kremlin, is said to be involved in such efforts. According to sources in the Syrian coastal region, the heartland of the Alawites, Assad’s people, a campaign to hire Syrian mercenaries is underway there. Such reports are also coming from the area around the capital Damascus and the eastern Syrian province of Deir ez-Zor.

The reports from Syria, however, do not confirm that Moscow is actually as successful in raising Middle Eastern auxiliaries as the Russian defense minister claims. Even the militiamen in the propaganda video seem more like experienced extras – not like men who are dying to defend Assad’s rule in Ukraine. Supporters of the Syrian tyrant – and especially the Alawites – have paid a high price in blood for this in their own country. If so, then economic hardship is what drives Syrians to go to war far away.

There is also the question of the military clout of Syrian mercenaries. The number of battle-hardened and well-trained forces is limited. “Perhaps the Syrians are not primarily intended for deployment at the front – but for the dirty work in the areas that have already been conquered,” said a Syrian political scientist only recently. First, that would suit Putin’s war style, and second, it would make sense in Ukraine – especially in the occupied places in southern Ukraine where the Russian military meets unarmed resistance.

Assad himself is making every effort to demonstrate his loyalty to Putin. He provided diplomatic support where he could. A good week before the attack, the Russian defense minister inspected Russian bases in Syria, which also played a role in setting up the Russian deployment and creating a threatening backdrop for the West. Russian warships stopped at the Tartus naval base en route to the Black Sea. Russian bombers capable of being armed with nuclear weapons have been deployed to the Hmeimim air base. The Syrian presidential office even claimed that Assad and Putin discussed the attack months before the war began.

Now that these are attacking Ukrainian cities, Assad must brace himself for tougher times. It is unlikely that Putin will give up Syria because of the war in Ukraine. The military engagement in Syria is too manageable for that, and the Russian bases are too strategically important. But the longer the Russian ruler in Ukraine gets embroiled in a bloody and costly campaign, the fewer resources he can devote to Syria.

For all its loyalty to the alliance, the Syrian regime cannot hide the fact that there is great uneasiness about the war in Ukraine. A distracted Russia benefits the insurgents. And Assad cannot realize his plan to recapture all of Syria without Russian air support. But what seems to be most pressing right now is concern about the economic impact of Putin’s new war. The Syrian cabinet therefore held an emergency meeting on the very first day of the Russian attack. It is estimated that around two thirds of the population live in extreme poverty. The crisis is likely to worsen significantly now that the regime’s powerful ally is also subject to severe Western sanctions.

Damascus appears to be preparing for “possibly the worst food and oil shortages in decades”, according to a report by the internet portal “The Syria Report”, which specializes in the Syrian economy. The rising prices for wheat and oil are already a big problem for Damascus. The economic decline and the progressive impoverishment of the population have been causing difficulties for the Syrian ruler for some time. Protests erupted last month in the southern Syrian city of Sweida because the government in Damascus, faced with strained state coffers, excluded hundreds of thousands from a subsidy program for essential goods such as bread, cooking gas and petrol. For a variety of reasons, the people of Sweida, who belong to the Druze minority, may venture a little further than those frustrated elsewhere under Assad’s rule. But the protests are meaningful for the mood of the population.

For years, diplomats and observers have been wondering how long it will be before the ability to suffer is exhausted, until misery and anger outweigh the fear of repression from the system. Previous shocks have shaken the regime – if not to its very foundations. The inadequate response by the leadership in Damascus to the corona pandemic had led to angry Syrians openly expressing criticism on social media. Even if a revolt seems unlikely, the question remains how the population will cope with a new economic shock.

At the moment, Assad can hardly hope for significant help from Putin to cushion the blow. Russia has enough economic problems of its own in the face of Western punitive measures over the invasion of Ukraine. Putin has previously shown little interest in investing money in Syria’s reconstruction. And the sanctions against Moscow also affect the leadership in Damascus. The regime and its minions have deposited large sums of money in Russian banks. “Moscow should no longer serve as a financial haven for Syrian businessmen and members of the ruling family,” writes the Syria Report. “The decision to exclude several Russian banks from the SWIFT banking system has increased the risk of international transactions by Syrian banks, some of which are linked to Russian banks.” So too is the Syrian financial sector, which is desperate for opportunities, to take part in hard currency come, another stress test ahead. According to the “Syria Report”, the pressure on the declining Syrian pound will increase again.

When in doubt, Assad must rely more on the Iranian regime, which fought the uprising in Syria together with Moscow, but competes with it for influence. Assad had always cleverly played off his two protective powers against each other. This is also becoming more difficult now. Be it because there isn’t that much to get in Russia anymore. Or because Putin, in the Ukrainian emergency, demands the price for having saved the head of his Syrian protégé at the time.

Now that the Russian president has become a pariah himself, Russia’s efforts to win the West over to a rapprochement with Damascus or projects in the gray area of reconstruction aid are also becoming less likely. In one case, the US government’s tolerance of the Arab partners’ new policy of appeasement towards Syria has already decreased. And observers suspect that this has to do with Ukraine. The United Arab Emirates, which is steering a rapprochement course with Assad, has felt Washington’s displeasure at its ambiguous position on Russian aggression. Two sources said no Emirati representative was invited when a Syrian meeting of like-minded Small Group diplomats was held recently in Washington.

And the war in Ukraine could also have an impact on Syria policy in the EU – not least in view of the pictures of Syrian fighters who are now promoting a foreign mission in Europe. “Assad is no longer just a threat to his own people, but officially also to peace in Europe,” says a Syrian analyst. “I wonder if the European attitude towards him will change accordingly.”