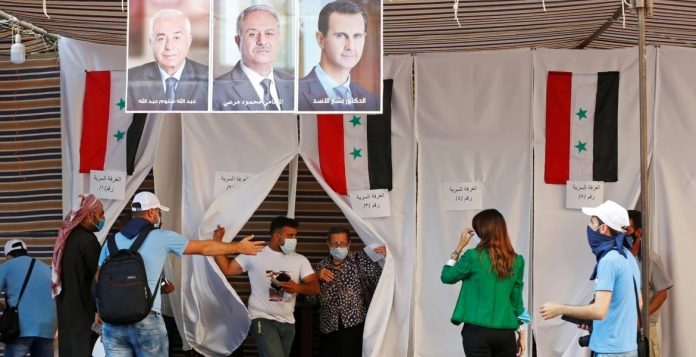 A soldier pokes his chest and presses his ballot paper to the stab wound. Meanwhile, before and after, he and his comrades chant “With spirit, with blood, we defend you, Bashar!” The martial spectacle is part of the show, which is only superficially about the elections in Syria, which the regime held in the areas under its control this week.

In other videos, the election officers quite unabashedly fill out the ballot papers for the voters present, singing and chanting while flags are waved in the background. Of course, those present hardly have a choice – Syria’s state-owned companies, for example, carted their employees into the polling stations with the clear request to please put the cross in the right place (or, best of all, leave it to the local officials).

Looking at these pictures, it becomes clear that this is not about faking the appearance of free and fair elections, but rather sending a clear message – to supporters and opponents of the Assad regime, in Syria and outside the country: A Bashar Al-Assad leads, there is no way around it, the future of the country lies solely in the hands of its regime – and that is not interested in compromises and does not care a bit about criticism or pressure from outside or inside.

The location where Bashar Al-Assad and his wife Assad cast their votes was a deliberate choice, a calculated provocation: after all, the city in the vicinity of Damascus was the target of the first chemical attacks, the starvation tactics and the regime’s large-scale expulsions in 2013. The message is aimed at those who are no longer in Douma – a large number of the surviving residents had to flee, were expropriated or forcibly relocated. Assad’s appearance there is aimed at the relatives of the victims and the former residents of Douma, but also on behalf of the diaspora, which knows exactly what Douma stands for.

A return to Syria, so the message, is only possible on condition of unconditional loyalty – but regardless of this, the regime reserves the right to take any means it considers appropriate to take action against returnees. It is a painful reminder for millions of Syrians abroad why they will not be able to return to their home country for the foreseeable future.

The Assad regime’s promotion of the security of return for refugees, especially among Western countries, was and is not only insincere, but also cynical. On the one hand, it serves the right-wing populist resentment, which resulted, for example, in the case of Denmark’s success, which wants to continue to deport refugees from Syria, but above all it is intended to further wear down and break the Syrian diaspora psychologically. The ongoing expropriation of refugee Syrians and the demographic transformation of entire neighborhoods and regions in Syria also serve this purpose.

At the same time, by appearing in Douma, Assad is demonstrating strength and determination towards his supporters, especially the army and militia units loyal to him. On the one hand, Douma for Assad is a symbol of his claim to bring all of Syria back under his control; on the other hand, the choice of the symbolic location gives his henchmen the absolution to proceed with all the brutality already demonstrated during the war.

Legitimacy is linked to loyalty – this message is also addressed to those groups in Assad’s circle of supporters who sometimes act on their own account and do not always allow themselves to be controlled as the regime would like. These include, for example, the newly rich warlords, war profiteers who have achieved (or were able to expand) prosperity and influence at the expense of the civilian population, but who also compete with one another.

Assad depends on the class of business elites, but is careful not to let anyone become too powerful. The focus on the strength of his person should signal to them that a place in the sun in his Syria will only lead to him.

This is also to be understood as a test of strength against Russia, for example, because Moscow operates in principle with a similar calculation in the region. Russian foreign policy, for example, does not commit itself to one party or one person, but ideally holds several cards in hand. This also applies to the relationship with Iran and Syria. Russian businessmen, who often enough operate on their own account in Syria, have continuously clashed with Syrian colleagues in recent years.

But resentment is also growing in the Kremlin: Russia has neither the interest nor the resources to finance Assad’s reconstruction of Syria. For this reason too, Moscow recently urged Assad to take part in diplomatic initiatives at both local and international level.

For example the committee that is supposed to work out a new constitution in Switzerland. The fifth round of the Geneva Talks officially started at the beginning of the year. The absolute claim to power that the staging of the elections in Syria underpins now negates any legitimacy that the regime is willing to concede to such initiatives.

Like the Alawites, Assad now obliges the entire population to be loyal

Rather, it reveals what has consistently been implemented as a tactical line since the beginning of the war: negotiations primarily serve to gain time in order to create facts in the country. Incidentally, this line also undermines those actors on the part of the regime who are trying to rebuild trust at the local level and enable people to live together.

In the country, it primarily affects the group that is sometimes referred to as “gray Syria” – a large part of the population who are primarily concerned with economic survival and physical integrity. Incidentally, this also includes large parts of the Alawites. The religious community from which the Assad clan originated is by no means one of the war profiteers. An Alawite can describe how the community is forced into loyalty, but also suffers from the supply bottlenecks and the arbitrariness of the warlords and the nouveau riche.

Just like the Alawites, Assad now obliges the entire population to be loyal and clearly displays the options: “Assad or we burn the country to the ground,” his henchmen, the Shabiha, chanted at the beginning of the uprising in Syria.

As insincere as the elections in Syria were, their staging revealed Assad’s cards: the regime has no convincing plan for reconstruction, and certainly no interest in social reconciliation or coming to terms with it. His primary goal is to maintain power, linked to the person of Bashar Al-Assad, who calls for unconditional allegiance within and forbids any outside interference.