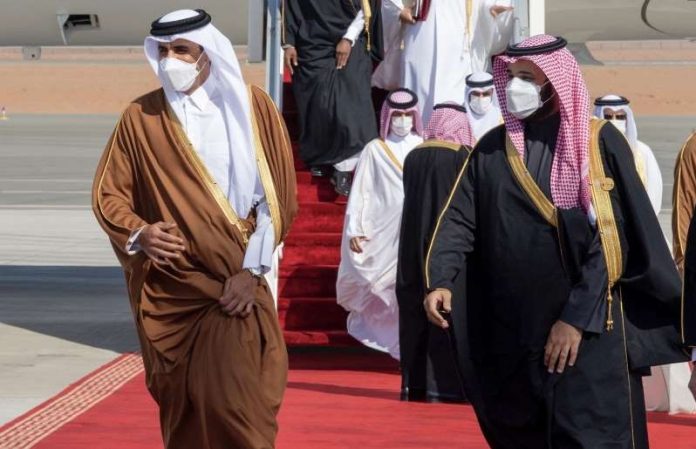 A hug marked the symbolic end to a Cold War in the Gulf, that had lasted more than three and a half years. When the Qatari Emir Tamim Bin Hamad Al Thani arrived in the spectacular desert landscape of the new Saudi tourist destination Al Ula on January 5, Crown Prince Muhammad Bin Salman, the de facto ruler of Saudi Arabia, greeted him warmly. It was the first meeting of the two in years – since the neighboring Arab countries sealed off Qatar in June 2017. Since then, Saudi Arabia, the United Arab Emirates (UAE) and Bahrain, as well as Egypt, had embargoed the small but extremely rich country in the Gulf. The land and sea borders were closed, Qatar Airways was not allowed to use the airspace of its neighbors and was forced to take long detours.

Emir Tamim was now able to travel unhindered to the routine summit meeting of the six Gulf monarchies: the Gulf Cooperation Council (GCC) in northwestern Saudi Arabia. The Saudi crown prince had invited him weeks ago, and Qatar’s ruler had accepted the invitation. That had fueled speculation about an imminent breakthrough. Finally, Saudi Arabia opened its land borders for Qatar, air traffic should be resumed on Tuesday.

At the summit meeting itself, the representatives of the Arab Gulf States signed an agreement for “solidarity and stability” in the region. Crown Prince Muhammad, the Saudi host, said in a televised address that the Gulf monarchies “urgently need to pool” their efforts to address the challenges in the region. “These include, in particular, threats from the Iranian regime’s nuclear and ballistic missile program.” The UAE Minister of State for Foreign Affairs, Anwar Gargash, in turn spread on Twitter before the meeting that it was a matter of restoring the cohesion of states in order to ensure security, stability and prosperity.

Egypt’s Foreign Minister Samih Schukri and Jared Kushner, the son-in-law and unofficial Middle East representative of the outgoing US President Donald Trump, also attended the summit. Crown Prince Muhammad, who is one of Trump’s close allies, thanked the United States and Kuwait for their mediation in the conflict with Qatar.

Its settlement was mainly due to Kuwait’s intensive and months-long diplomacy. Most recently, the country’s emir, Nawaf al Ahmad Al Sabah, had found a compromise that both Crown Prince Muhammad and Emir Tamim could accept. He had already mediated between Qatar and its neighbors during the past year. In December, Kushner also mediated between the divided rulers in Riyadh and Doha on a trip to the Gulf. Afterwards, Saudi Foreign Minister Faisal Bin Farhan said there was “significant progress”.

Shortly after the embargo was imposed in the summer of 2017, the then US Secretary of State Rex Tillerson had already carried out crisis diplomacy because there had been rumors that Saudi Arabia and the UAE were even ready to invade Qatar. Washington, however, had a vital interest in resolving the conflict, mainly because the US Central Command of the US armed forces maintains a command base in Qatar. From there, more than twenty bases in the Arab world are serviced, as well as others in East Africa and Central Asia. The US Central Command is also responsible for the Fifth Fleet of the Navy, which has been stationed in Bahrain since 1995, which had joined the embargo. In addition, Saudi Arabia, the UAE and Egypt, like Qatar, are among the 15 largest customers of the American arms industry.

Officially, the trigger for the isolation of the Arab country by its neighbors was the fact that in April 2017 Qatar paid a high ransom to a pro-Iranian Shiite militia for 26 Qatari citizens who were kidnapped in southern Iraq. Saudi Arabia and the UAE accused Doha of supporting terrorism and maintaining close ties with Iran. The fact that Qatar supported the Muslim Brotherhood, which had been declared a terrorist organization in Saudi Arabia and the UAE, also played a role.

Qatar was presented with a catalog of 13 demands, the fulfillment of which is a prerequisite for normalizing relations. These included the closure of the Al Jazeera news channel and the Turkish military base in Qatar. Doha rejected the allegations and justified itself by saying that it was forced to cooperate with Iran in the joint exploitation of the world’s largest gas field in the Persian Gulf.

But the real reason for Qatar’s isolation was that the small country was not ready to submit to the leadership of Saudi Arabia. Since Hamad Bin Khalifa Al Thani came to the throne in 1995, Qatar had developed its own foreign policy. The rift had come to a head since 2011 because, after the beginning of the “Arabellion”, Qatar had campaigned for change in the Arab world and supported the Muslim Brotherhood in the process.

That is why Egypt also joined the embargo. On Saturday, the Kuwaiti Foreign Minister informed Egyptian President Abd al Fattah al Sisi of the impending breakthrough. It is more difficult to convince the UAE as well. Because its Crown Prince Muhammad Bin Zayed Al Nahyan was the driving force behind the isolation of Qatar.

However, once relations with Israel have normalized, the UAE can afford to be seen as a cross-driver in the conflict with Qatar. Economic and military cooperation with Israel is already being deepened. For Saudi Arabia, however, normalization of relations with Israel would come too early. With the settlement of the conflict with Qatar, the kingdom is fulfilling a wish of the outgoing President Trump and recommends his successor Joe Biden as a constructive partner.

Qatar emerges stronger from the conflict. In more than three years, the two leading powers of the Arab world, Saudi Arabia and the UAE, have failed to impose their will on their brother state. Qatar, one of the countries with the highest income per capita, has shown its economic strength and political resilience.