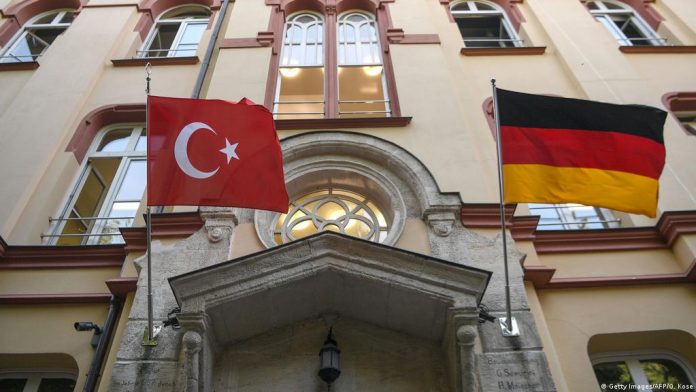 On the one hand, the German government clearly condemns the Turkish government’s territorial claims in the Mediterranean: Germany has backed Greece in the Greek-Turkish conflict over a number of islands in the eastern Mediterranean. At the same time, the extent to which Turkey is spying in Germany and trying to influence public opinion in Germany’s Turkish communities for its own political and nationalistic purposes cannot be ignored.

In an unusually direct way, Foreign Minister Annalena Baerbock recently said: “Greek islands are Greek territory and nobody has the right to question that.” Berlin’s unequivocal stance on the dispute over the Greek islands in the East Aegean, which has been open for years, is likely to provoke irritation behind the scenes in Ankara. The German minister made it clear that Berlin would show solidarity with Athens on this issue and stand up for the European family. At the same time, the Berlin government has repeatedly thanked Turkey for mediating the dispute over the export of Ukrainian grain: “What your government has achieved is a glimmer of hope for many people who are threatened with starvation. We appreciate that very much,” said Minister Baerbock.

Turkey’s Cavusoglu, on the other hand, makes it clear that for him – and thus for Erdoğan – Germany has practiced “honest mediation” in the past in conflicts in the eastern Mediterranean and the Aegean and has shown a balanced attitude. “But lately we are seeing that balance unfortunately being lost. You have to listen to both sides and get information from both sides, without prejudice,” he says. “Third countries, including Germany, must not get involved in provocations and propaganda, especially from Greece and the Greek part of Cyprus.”

During her last visit to Turkey, Baerbock not only unsettled her counterpart in terms of territorial claims in Greece. She also met with representatives of the opposition and civil society. The meetings with opposition representatives are likely to have also upset the Turkish leadership. President Recep Tayyip Erdoğan’s support is dwindling because of the poor economic situation with an inflation rate of more than 70 percent, the opposition is gaining ground. The opposition parties have been under pressure for years. The pro-Kurdish opposition party HDP, for example, is threatened with a ban, and a leading CHP politician was recently put on trial.

Most recently, six important Turkish opposition parties published a joint basic program. Observers assume that the parties will form an alliance and nominate a common presidential candidate for the presidential and parliamentary elections scheduled for the summer of 2023. The alliance is made up of the largest opposition party, the CHP, the national conservative Iyi party and the Deva party.

Annalena Baerbock also called for the release of the imprisoned cultural promoter Osman Kavala. She sees it as her duty to “respect and defend the judgments of the European Court of Human Rights, without exception and at all times,” she said at a joint press conference with her Turkish colleague.

But the lines of conflict have not only widened in Germany’s foreign policy: In the current year, the German Federal Public Prosecutor has already initiated eight preliminary investigations into suspected secret service agent activity in accordance with section 99 of the Criminal Code. In 2021, the federal prosecutor’s office opened a total of 24 investigations against suspected agents from foreign countries. Turkey is still one of the countries whose espionage activities concern the federal prosecutor the most. In the past year, seven espionage proceedings – and thus almost one in three – were opened against suspected Turkish agents. In 2022, investigations into suspected work for a Turkish secret service were launched in one case.

In mid-July, a Turkish agent was sentenced to one year and nine months on probation by the Düsseldorf Higher Regional Court. He had confessed to having collected information about supporters of the banned Kurdish Workers’ Party PKK and the Gülen movement since 2018 and passed it on to the Turkish secret service. The man was arrested last September after hotel employees in Düsseldorf found a live gun on him. 100 elite police officers from the SEK were involved in the arest.

Turkey also continues to make active use of the opportunity to disseminate search requests via the international investigative authority Interpol. In total, the German Federal Criminal Police Office (BKA) submitted 1,227 Interpol search requests in the current year. Of these, 203 requests and thus more than 15 percent came from Turkey. In previous years, the proportion had always been in the single-digit percentage range. In 2021 there were 4,203 Interpol searches, 291 of them from Turkey.

Therefore, more and more politicians are demanding a change of course towards Ankara from the German government. “It is more than questionable to court Turkish President Erdogan and Foreign Minister Baerbock in such a way, while Turkey is one of the busiest actors in espionage in Germany and at the same time is increasingly using the Interpol search requests to pursue refugees from the opposition,” says a member of the German parliament.

There is no doubt that Turkey’s mediation between bitter wartime enemies Russia and Ukraine was a success. An agreement for the export of Ukrainian grain via safe corridors on the Black Sea, with Turkey as a kind of guarantor power, working hand in hand with the United Nations to save the poor countries of the world from famine. Although this delivers nice headlines, these hymns of praise in the direction of Erdoğan should not last long.

At the opening of the control center in Istanbul, which is supposed to oversee the convoys of ships carrying Ukrainian wheat freighters, the question was whether the agreement launched by Turkey and the UN will hold up in the long term or whether the Kremlin will break its promises. And even if Russia’s President Vladimir Putin should keep his word and no longer allow Ukrainian ports to be shelled, elections in Turkey are not won with foreign policy exploits, but at home – it’s the economy, jobs, wages, inflation.

Turkey is a torn country whose leader is no longer as sure of his power as he was during his nearly 20 years as prime minister and later as president. The polls show that the support of his governing party, the AKP, is crumbling, the opposition is gaining a foothold and that Erdoğan would not easily win an election, mainly because of the astronomical price hikes.

That is why he conducts his foreign policy even more than before with a view to internal effects. In Tehran, he met with Putin and Iranian President Ebrahim Raisi, who are considered pariahs in the West, for a three-way summit. In northern Syria he threatened to invade again. He duped NATO by questioning the admission of Sweden and Finland. And with Greece, as already described, he is heading towards a dispute over gas deposits in the eastern Mediterranean. Less and less a reliable partner for Germany.

In Europe and in Germany there are great reservations about another Turkish invasion of the civil war country Syria, and Iran and Russia, which are involved in Syria, are unlikely to stand by and watch a major military operation. In any case, at the three-way summit in Tehran, Erdoğan did not appear to have been given a free hand by Putin and Raisi. Erdoğan’s foreign policy adviser Ibrahim Kalın nevertheless announced: “We don’t need anyone’s approval for this.” Foreign Minister Mevlüt Çavuşoğlu added: “It is our duty to eliminate any kind of threat to our country – no matter what others say.”

With regard to Turkey, Germany is not only concerned with foreign policy, but also with domestic policy

In Germany, the government in Berlin receives both praise and warnings from representatives of Turkish origin. The chairman of the Turkish community in Germany, Gökay Sofuoglu, warns on the one hand that “certain topics should be discussed diplomatically behind closed doors” and believes that “other methods should in any case be found to talk to each other”.

The German government has made it clear in recent weeks that foreign policy towards Turkey must not be limited to governmental dialogue. Rather, foreign policy is being redefined under Minister Baerbock, and that alone is an approach that deserves praise. The German chief diplomat sees the “heart of our coexistence” in civil society connections between Turkey and Germany. For her, foreign policy does not only consist of an “exchange between ministries”. German-Turkish relations consisted of much more than the “construction sites” that existed in the mutual relationship. It is hoped that the German interior ministry will take a similar position on the growing influence of pro-Erdogan whisperers between Hamburg and Munich.

MENA Research and Studies Center - 2022-09-20
In two and a half months, the World Cup will start in Qatar. During a visit, the hosts present a country polished...