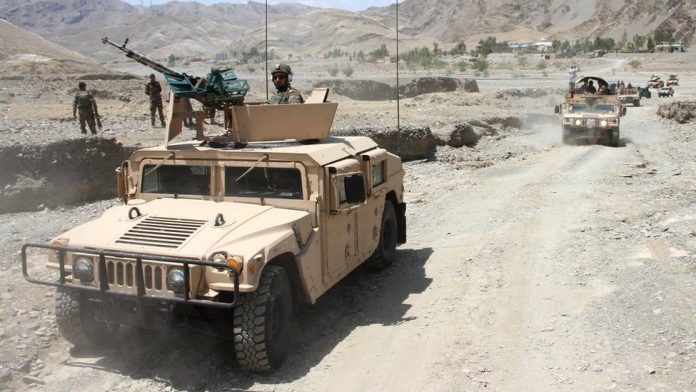 With the withdrawal of foreign troops from Afghanistan, it is not only the Afghan government that is in distress. Tajikistan’s President Rachmon must also quickly find an answer to how he intends to react to the advance of the Taliban at his country’s border. After more than a thousand Afghan soldiers fled the fighting with the Taliban in northern Afghanistan over the frontier to Tajikistan, he has already ordered the mobilization of 20,000 soldiers in the border area. But that alone will hardly be enough if the fighting reaches Tajikistan. Because the country, which Rachmon has ruled in an authoritarian manner for almost 30 years, is anything but stable itself.

Politically, the head of state has all powers in his hands, including the media. Tajikistan is economically dependent on the support of the international community, the poorest successor state to the Soviet Union and one of the poorest countries in Asia. Its 1,300-kilometer-long border with Afghanistan is hardly protected and a popular route for drug smugglers. The Tajik army is poorly equipped, would have little to oppose the Taliban and it is questionable whether these soldiers would be prepared to risk their lives in an emergency.

Most of the soldiers who fled to Tajikistan are said to have returned to Afghanistan. But the Tajik authorities are also preparing for the arrival of civilian refugees. Apparently, more than a thousand people – mainly women, children and elderly – have sought refuge in the Badahshan region. If many refugees actually go to Tajikistan, the question is not only how these people can be accommodated, but above all how they can be looked after. Because even now, a third of the Tajik population does not have enough to eat. Due to the corona pandemic, many Tajiks were unable to travel abroad to work in the past year, mostly in Russia, – and remittances from migrant workers usually make up a good third of the gross domestic product. This income is now missing. In the markets, prices for products such as wheat, oil and sugar have skyrocketed over the past year. According to the US Agency for Development Cooperation (USAID), more than a quarter of the 9.5 million inhabitants live on less than 1.60 euros a day.

President Rashmon’s greatest concern, however, should not be about the refugees, but about the possible spread of the fighting and ideological battle to Tajikistan and the possible infiltration of opposition members and radical Islamists from Afghanistan. The fear is not unfounded: there have been terrorist attacks in the past already. In addition, Rachmon is a declared opponent of the Taliban. In the 1990s he supported Ahmad Shah Massoud, an Afghan of Tajik descent and one of the leaders in the resistance to the Taliban. As long as the US and their allies were in Afghanistan, Rachmon hardly had to worry about the security situation in the south.

The current threat posed by the Taliban brings back memories of the 1990s. A bloody civil war raged for five years in Tajikistan, which had only just gained independence from the Soviet Union. The death rate at that time is still unclear today – the estimates are between 20,000 and 100,000 victims. Rachmon, a former Communist Party official, prevailed against the United Tajik Opposition, which consisted of democratic reformers and Islamists, in the fighting that lasted from 1992 to 1997 thanks to the support of Russian and Uzbek soldiers. However, the war was only superficially a struggle of different political orientations, but above all a conflict between regional clans.

The peace agreement signed in Moscow in 1997 stipulated that the “Islamic Party for the Rebirth of Tajikistan”, whose members had fought alongside the opposition, would become part of the political system. The Islamist party has long been the largest opposition force in the Tajik parliament. But under the pretext of fighting religious and political extremism, Rachmon takes rigorous action against his opponents. In 2015 the party was declared a terrorist organization and banned. Many of its members fled abroad, including to Afghanistan.

The Taliban declared a few days ago that they did not pose a threat to Tajikistan. But not only Dushanbe has doubts about this insurance. The government is desperately looking for support to secure the border. Russian Foreign Minister Sergei Lavrov promised help on Wednesday. Russia maintains its largest foreign military base in Tajikistan. In addition, the Collective Security Treaty Organization, a Russian-led military alliance of which Tajikistan is a member, could intervene in an emergency.

Americans are also concerned about current developments. New York Times and Wall Street Journal reports suggest Washington is considering sending soldiers and weapons to Tajikistan. However, the Kremlin has already spoken out against such plans. Help could also come from Beijing. Tajikistan is a member of the Moscow and Beijing-led Shanghai Cooperation Organization (SCO). The Chinese have been stationing their own soldiers on the Tajik-Afghan border for some time. There are many indications that Tajikistan will be the scene of a geopolitical test of power.