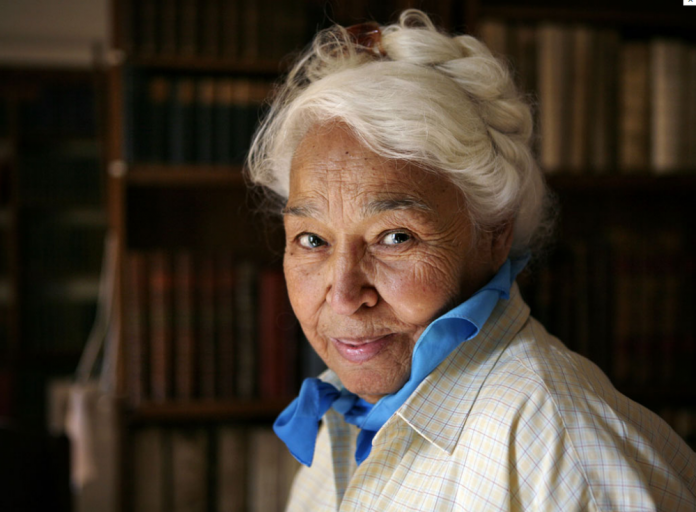 The Egyptian Nawal El Saadawi embodied the struggle of Arab women for self-determination. On Saturday, she has died at the age of 89.

She was the “Umm El women’s rights”, the mother of women’s rights in Egypt. This week Nawal El Saadawi died in Cairo at the age of 89. The prominent women activist has made a name as a defender of women not only in her own country, but also internationally. It was above all her outcry against female genital mutilation and honor killings that made her known.

In her book The Hidden Face of Eve, Saadawi, who was born in a village near Cairo in 1931, described her own experience: When, at the age of six, her genitals were mutilated on a bathroom floor while her mother watched. With a total of 50 non-fiction books and novels on sexuality and religion and inequalities in Islamic inheritance law, she repeatedly caused controversy in Egypt.

Because of her book “Women and Sexuality”, she lost her official post in the Ministry of Health. Ten years later, the then President Anwar al-Sadat had put her to jail, like many mainly left-wing activists in Egypt. She was released three months later, after Sadat was murdered. Her experiences in the women’s prison in Cairo, some of which she wrote down on toilet paper with an eye pencil, were published under the title: “I spit on you. Report of a woman at point zero”.

In the 1990s, Saadawi went into exile in the US for three years due to massive hostility, especially from conservative and Islamist groups in Egypt. She has been repeatedly accused of apostate Islam and received death threats. The militant Saadawi has also been honored internationally.

In Egypt itself, Saadawi was above all an inspiration for generations of women, even though she has only played a marginal role in the Egyptian women’s movement since the mid-1990s. The movement had diversified at the latest with the uprising against dictator Husni Mubarak in the Arab Spring in 2011. Campaigns against rampant sexual harassment in public or for reform of family law were led by younger activists. El-Saadawi, who had also demonstrated on Tahrir Square, mainly focused on interviews in international media.

Many of the activists at the time followed her when she accused the Muslim Brotherhood, which was elected to the government in 2012, of having co-opted the revolution. But when Saadawi began to defend the regime of today’s President Abdel Fatah al-Sisi and its human rights violations after the military took power in 2013, it broke down.

One of the Tahrir activists from back then, the author Shady Lewis Botros, tried to summarize criticism and praise in Egypt against Saadawi on his Facebook page. There are many reasons to be critical of her, especially because of her shameful position in recent years and her defense of the al-Sisi regime, he writes in his obituary.

On the other hand, it gave a large number of women, not only in Egypt, but in the Arab world as a whole, a new sense of self-worth and shaped many life decisions. “For many generations, El-Saadawi was the personified image of feminism, women’s rights and the idea of ​​rebellion to courageously challenge injustices in society.”

Even on the day of her death, it became clear how much work lies ahead of her successors. A law was passed in Egypt on the same day that tightened the penalties for female genital mutilation – it has been officially banned since 2008, but remains widespread.

At the same time, President al-Sisi described a soon to be modified family law, which has caused an outcry, as “balanced” and “in the service of the public”.

According to the drafts circulating so far, a marriage contract should not be signed by the woman herself, but by a male relative on her behalf, who also has the right to dissolve the marriage. Male relatives can prohibit women from traveling. A mother cannot register the birth of her child herself and apply for an identity card or passport for her child or determine the type of schooling.

“We have female ministers in Egypt who do not have the right to sign their own marriage contract. In addition, a man could forbid them to go on a business trip,”commented Nehad Aboul Komsan, Head of the Egyptian Center for Women’s Rights (ECWR), on the draft law. It is completely out of date in a time when single women lead over 18 percent of Egyptian households.

In a recent interview, Saadawi once pointed out that there were goddesses in ancient Egypt: “Isis was the goddess of wisdom and not of reproduction! And there was Maat, the goddess of justice. What then happened historically was that the women were robbed of their previous position,” she explained. Now Nawal El Saadawi is dead. Her fight for women’s rights in Egypt continues.