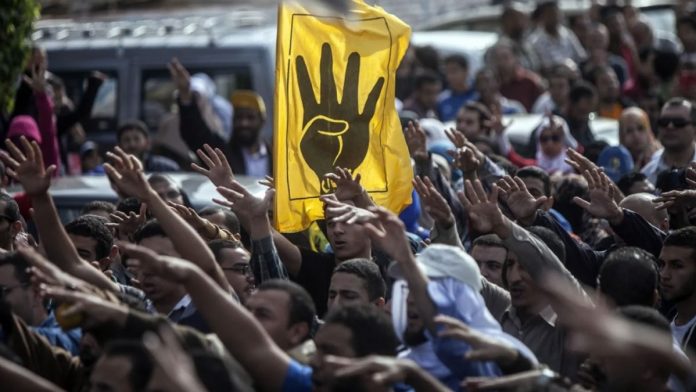 The Muslim Brotherhood is historically in the deepest internal crisis. Internal divisions are deepening amid a bitter struggle between its two wings in Istanbul and London for leadership of the group and control of its economic resources. It is sometimes difficult to keep track of the rapid succession of conflicting decisions and steps taken by rival camps.

The conflict also revolves around the question of who holds the post of supreme leader of the group. The Istanbul faction declared Ibrahim Munir deposed from the leadership of the Muslim Brotherhood and in turn appointed Mustafa Tolba as provisional supreme leader for six months. However, the London faction and Munir rejected this move and denied that Tolba should be allowed to hold this post. The Istanbul wing, in turn, responded by announcing the formation of a committee to lead the Muslim Brotherhood, again under Tolba’s leadership.

In the final stage of the internal struggle, the London branch released a statement saying they would not recognize the decisions of the Istanbul wing and the General Shura Council, which it controls. They stressed that “Supreme Leader Ibrahim Munir is the only legitimate representative of the organization.” The formation of a committee responsible for running the organization, as decided in Istanbul, is invalid.

“The assumption of office by Ibrahim Munir in London triggered a dispute with the Istanbul wing, which wants to push through its own candidate with Mustafa Tolba and want to seize control of the organization and rally supporters behind it”, an expert on the Muslim Brotherhood said. At any rate, the group currently has two rival leaders.

The conflicts between the two factions are likely to increase and create further divisions. That lies in the nature of this organization, whose history has repeatedly been marked by splits and the disintegration into small splinter groups.

A study released by “Trends Research Center” traces the Muslim Brotherhood’s current crisis to older differences within the group. At the moment, the power struggle between the London and Istanbul factions is about controlling the Brotherhood’s funding sources and media platforms. The importance of this was illustrated in a previous conflict, namely the 2016 dispute over the leadership of the group between Mahmud Ezzat and Mohammed Kamal. Experts saw this as an “ideological dispute that was sparked by the question of the use of force”. The two wings in London and Istanbul ultimately emerged from this ideological debate.

Experts emphasize why controlling the Muslim Brotherhood’s economic base is so important. On the one hand, these resources are necessary to advance the group’s political projects. On the other hand, they are of crucial importance for the multiple ways in which the organization seeks to infiltrate society and thereby achieve the gradual Islamization of regions they want to influence.

The Brotherhood has various economic sources. This includes investments made by the organization as well as individual donations, monthly contributions from its members and donations from entrepreneurs and business people associated with the Brotherhood. Funds contributed by charities and aid organizations, many based in Europe and some in Asian countries, are also important.