The case of emergency in Lebanon is approved by the parliament on August 13. Thereby, a new door will be opened for confrontation between the political regime and the popular protests that aim at toppling the regime and the ruling political forces.

Ahmad Eitani, an expert in Lebanese affairs confirms that imposing the state of emergency will not solve any problems, it would be rather a step through which the ruling forces seek to gain more power, to suppress the popular protests and demands.

According to the Lebanese emergency law, the state of emergency grants the army exceptional powers, through which it can manage a number of state institutions and have direct supervision over some areas that might be turned into closed military zones according to the law.

The current dispute between the ruling regime and the popular movements in addition to the army regarding the state of emergency is because the leadership of the army and security services is not an independent authority capable of managing the emergency period neutrally. On the contrary, it may turn into a striking hand to confront the people’s demands, Eitani says, citing the Chief of Lebanese public security Abbas Ibrahim, who is close to Hezbollah and some military leaders close to the Aoun movement.

Edward Bou Saab, a security expert, has a similar view point, as he believes that the situation in Lebanon does not require imposing the state of military emergency, as the Beirut port explosion, according to the government and the political regime, was an accident and not a planned operation that requires deploying the army. Given that the majority in the parliament supporting the government and its allies, it is quite obvious what the purpose behind this step is, Bou Saab says.

Hezbollah, Amal Movement, the Free Patriotic Movement, in addition to some allied figures in the Marada Movement and some Sunni Druze streams are considered as the majority in the Lebanese Parliament. The head of the Democratic Party, Walid Jumblatt, had previously warned of this majority’s danger to Lebanon, as it allows the ruling forces to pass decisions that help them to remain in power.

During the decision’s declaration, Nabih Berri, the Speaker of Parliament, considered the Lebanese army one of the most important symbols of national unity and that Lebanese people always have to trust the institution.

Commenting on Berri’s statement, Bou Saab believes that people really trust the army, but do not trust its leaders, who receive support from political parties, mainly from Hezbollah and the Aouni Movement. “This distrust will push more confrontation and the parliament step means that the ruling parties have actually started war against the people,” Bou Saab explains.

According to Lebanese law, the army has the right to impose its orders during the state of emergency by restricting the work of media institutions, preventing demonstrations and gathering, raiding civilian homes at any time without prior permission, and conducting house arrest against anyone suspected of being involved in activities that threat the security of the country.

Understood Facts and Options of War with the Army

By imposing the state of emergency, the Lebanese Parliament has put Lebanon’s army in the front. According to political analyst Eitani, this indicates that the ruling authority has become aware that the explosion of Beirut port was the straw which broke the camel’s back and that counting on the loyalists will not change the situation especially with the resignation of the government and the public calls for disarming Hezbollah and dismantling the parliament.

Explaining the disaster that may result from imposing the emergency law and putting the army in the forefront, Husam Youssef, a Middle East researcher, warns of reproducing the Syrian example in Lebanon: “The revolution in Syria started against a political regime, but soon it turned into a confrontation between the people and the army, and here there is no significant difference between the leadership of the Syrian army and the leadership of the Lebanese army. There are prominent leaders who are loyal to the Lebanese regime, especially President Michel Aoun and the leader of Hezbollah militias” he says.

The Speaker of the Parliament has already referred to a conspiracy against Lebanon, after several MPs resigned.

In the same context, Youssef says that the Chief of the army, Jozef Aoun, is called to think of his military tasks only, without getting involved in any confrontation with the Lebanese people, as this might create a bigger disaster than the disaster of the Beirut blast.

There is a possibility of repeating the scenario of 1988, when Michel Aoun conducted a coup d’etat.

He orchestrated it and attempted to create a military government, which led to armed clashes within the army and security services that ended with the failure of the coup and the escape of Aoun to France, after hundreds of deaths, including Lebanese soldiers.

Basil and Authoritarian attempts that pass through the army

During the past few months, Jebran Basil, the former foreign minister and prominent figure in the Aoun movement, exerted significant efforts to control the army’s leader by imposing some figures to its leadership, a private source said to MENA Research and Study Center.

“Following the emergence of Jozef Aoun and talking about him as a possible successor to Michel Aoun, Basil, who was aspiring to succeed his wife’s father, began to penetrate further into the army by appointing some figures, taking advantage of the president’s support for him, which brought him into clashes with the current army commander,” the source said.

Basil is one of the most rejected figures in the public opinion, as he is seen as the main driver of events in Lebanon and de facto president behind the scenes.

Here, the source expresses his concern about Basil’s ability to move his arms within the Lebanese army and military judiciary to strike the opposition and popular uprising. “What is required today by imposing a state of emergency in Lebanon is the involvement of the army in the political events in favor of the current regime that has become rejected by the people regionally and internationally, and that he no longer has any card to play except for being covered behind the military institution,” the source adds. 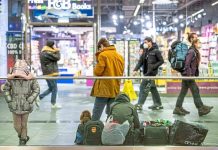 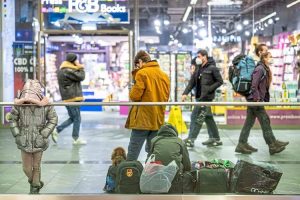 MENA Research and Studies Center - 2022-10-06
One of the major train stations in the Austrian capital Vienna: the entrance hall just recently renovated, a stylish waiting lounge with...