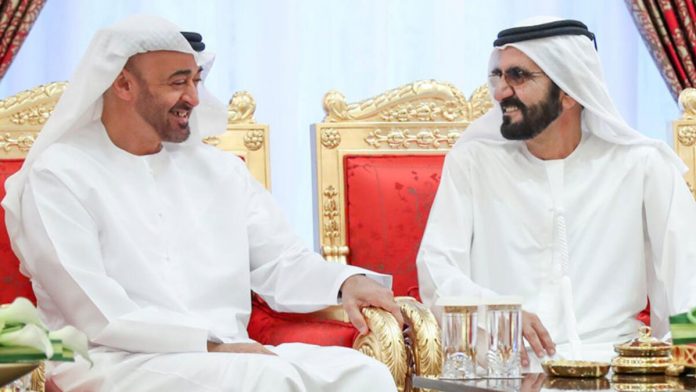 “Little Sparta” is how the four-star general James Mattis once described the United Arab Emirates. The Commander in Chief of the U.S. Central Command, later Secretary of Defense under President Donald Trump, certified the soldiers from the small state on the Persian Gulf: “They are not only ready to fight – they are real fighters.” He said at the beginning of the last decade. The association of the seven sheikdoms had participated in the anti-IS operation as well as a large number of other US-led missions in the Middle East and outside. In recent years, the UAE have also shown themselves to be astute tacticians, both militarily and economically.

Hardly a day goes by when the country’s foreign policy activities do not make headlines in the region. This Monday, the national security advisor, Sheikh Tahnun bin Zayed Al Nahyan together with a prominent delegation visited Tehran, where he met Iran’s President Ibrahim Raisi. The Iranian Deputy Foreign Minister and nuclear negotiator Ali Bagheri Kani had already come to Dubai at the end of November. Also in the Gulf metropolis, French President Emmanuel Macron signed a historic deal last Friday: The UAE will buy 80 French Rafael jets and twelve Caracal helicopters for more than 17 billion euros.

“The biggest military order in our history,” said Macron. At the same time, the Emirates have long been trying to get F-35 stealth jets from the United States. Relations with China are also close. The People’s Republic is the largest consumer of Gulf oil, and Beijing is said to have recently tried to build a secret military port in Abu Dhabi. Much to the annoyance of the US.

“The United Arab Emirates are a small, agile player. They try to navigate between the regional and global fault lines and at the same time benefit from them,” says Emile Hokayem of the British think tank IISS. The country – which turned 50 last week – has around ten million inhabitants, only one in ten is also a citizen, the others are workers from abroad, especially from South Asia.

With huge oil and gas reserves, but now also as a global hub for sea freight and air traffic and as a holiday destination, the UAE has risen to become the second largest Arab economic power. In fact, they are ruled by Abu Dhabi’s Crown Prince Mohammed bin Zayed al Nahyan, known as MbZ. In the past two years, the Emirates have realigned their foreign policy and are now looking for cooperation. The peace deal with Israel in the context of the so-called “Abraham Accords”, the end of Qatar’s blockade and, most recently, the reconciliation with Turkey also fit in with this.

The West sees the Emirates as the ideal partner

Why are the UAE being allowed to ignore their supposedly contradicting contacts with hostile countries? Why is one prepared to ignore the involvement in the wars in Yemen and Libya? On the one hand, the country does not have historical baggage like the Kingdom of Saudi Arabia, which as guardian of the holy places of Islam has to pay more attention to its reputation. Second, the Emirates are considered ideal regional partners for many Western countries: economically open, technology-friendly, rigorously positioned against political Islam, and now also partnered with Israel.

But the new line of having no more enemies in the region remains “a tightrope”, according to Hokayem. The forging of close ties between Abu Dhabi and Tehran is understandable for both sides. According to various reports, the Iranians have long carried out shadow deals for their boycotted oil via Emirati ports or waters. The Emiratis, in turn, want to take cover in the event that the negotiations on the nuclear pact in Vienna actually fail. The new proximity is viewed with some displeasure in Riyadh and Tel Aviv.

The UAE is threatened with hardship, especially with regard to the relationship between the US and China. President Joe Biden is said to have warned MbZ by telephone this year that the close economic ties to the People’s Republic could be detrimental to relations with Washington. There is particular fear of Chinese espionage activity, for example through the 5G network operated by Huawei in the Gulf state. That’s what’s gotten in the way of the F-35 deal so far.

“As a modern authoritarian regime, the UAE have long been oriented towards China,” says Andreas Krieg from King’s College London. In the Arab Spring, the rulers identified the Internet as the opposition’s operating room and thus a threat. Since then, Chinese surveillance technology has not only been transferred from East Asia to the Gulf, but from there to autocratic partners in Egypt and East Libya.

“The UAE have created a transparent citizen, trying to steer civil society in this way,” says Andreas Krieg. Scouting programs from Israel were already being used against dissidents and regional rivals in 2018, the New York Times reported at the time, two years before the signing of the peace agreement with the Jewish state. A drone defense system is now being developed with the Israelis. A contract for the joint construction of unmanned boats was also signed three weeks ago.

The emirates’ economic and defense policies have, of course, been overlapping for years. The participation in the war operation against the Houthi rebels in Yemen always served to secure strategically important ports in the south of the Arabian Peninsula. From there, the UAE were able to expand influence into the western Indian Ocean. In October it became known that the Emirati port holding company DP World is now also involved in the expansion of various ports in Africa.