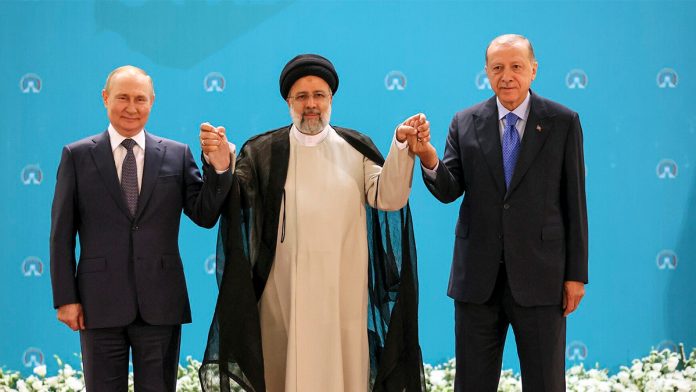 The meeting of the Presidents of Turkey and Russia, Recep Tayyip Erdogan and Vladimir Putin in Tehran last week, is a historic gathering: Erdogan was the first politician from a NATO country to meet and shake hands with Putin in person since the start of the invasion in Ukraine, the man who ordered this war. At the NATO summit in Madrid, there was a similar picture, just not as cordial as that between the Tsar and the Sultan: When Erdogan and US President Joe Biden stood next to each other, one could hardly get the impression that the two shared a mutual sympathy .

But back to Tehran! “I am happy to be on hospitable ground,” Putin told journalists. “We will strengthen our cooperation on international security issues and help resolve the Syrian conflict.” Raisi returned the compliments and praised the joint effort “to fight terrorism”. Although the meeting was officially about the situation in Syria, the focus of the press conference was on the situation in Ukraine. Tight-lipped, Putin gave the West the cold shoulder. More important to Putin, however, was probably a completely different topic anyway. US intelligence circles had leaked in recent weeks that Iran was ready to supply the Russian army with combat drones. The Iranian side has not confirmed the delivery in Tehran, but rumors about the ongoing training of Russian soldiers on the kamikaze drones are making rounds in Iran. Such Iranian arms deliveries to the Russian invasion inUkraine could disrupt talks on a new nuclear deal.

Iran’s primary interest is to counterbalance the new axis that is taking shape between Israel and the Gulf Arab States following Joe Biden’s trip to the Middle East. For Russian President Vladimir Putin, all foreign policy is currently dominated by his war against Ukraine. Only for the Turkish President Recep Tayyip Erdogan, Syria is actually in the foreground. In May he announced an invasion of northern Syria in order to form a so-called security zone of 30 kilometers. Of course, this is not possible without the consent of Russia and Iran – and they will not be willing to do so without consideration. Erdogan has been talking about this offensive for weeks. There he wants to create a 30-kilometer-wide buffer zone and push back the Kurdish militia YPG, which Erdogan sees as an extended arm of the PKK, a group also listed as a terrorist organization in Europe. At the same time, such a zone would allow him to settle Syrian refugees from Turkey there – an issue on which the Turkish president is coming under increasing domestic political pressure.

If Erdogan gets serious about the new offensive, he risks the next open conflict within NATO – in the middle of the Ukraine war, in which the defense alliance is trying to achieve unity. Ankara’s presence in Syria has led to tensions between NATO member and its Western partners in the past, because the YPG was America’s most important ally in the fight against the terrorist militia IS. The Pentagon is alarmed. If Kurdish forces were tied down by a Turkish invasion, the concern is that thousands of IS terrorists could escape from prisons in the region, guarded by Kurds.

Erdogan is aware that Putin is on the defensive in Syria, the Russian invasion of Ukraine does not allow parallel military action in Syria. Moscow had to withdraw units from there and relocated soldiers to Ukraine. It also brought mercenaries from the private security company Wagner from Syria to eastern Ukraine and sent Syrian mercenaries there. This means that Erdogan sees a chance of being able to wrest at least a limited Turkish offensive from Moscow. In view of the West’s punitive measures against Russia and the changing Russian energy policy, it is crucial for Moscow that Turkey does not impose sanctions. Russia also does not want to alienate Turkey because it is the only NATO country that maintains a political relationship with the Kremlin, a means of pressure for Turkey to a certain extent.

For Erdogan’s plans in northern Syria, he also needs the approval of Iranian President Raisi, because Iran is skeptical: Erdogan wants to conquer regions that come close to the Iranian sphere of influence. If anything, Raisi would only agree to an invasion with security guarantees for his Shia protégés. Because Tehran is also using the Russian vacuum in Syria. Iranian forces are said to have returned to strategically important locations, such as near Damascus airport and not far from the Israeli border, to Moscow’s envy.

In economic matters, however, Russia and Iran are not partners, but rather competitors. Both countries primarily export energy resources. By offering its oil to China and India at a discount, Russia is reducing Iran’s foreign exchange earnings. In addition, Moscow currently has a keen interest in keeping Iran off the world oil market – because the easier it is for Western countries to obtain oil from sources other than Russia, the more blunt the Kremlin’s energy weapon becomes. This is probably one of the reasons why Putin wants to prevent another agreement on Iran’s nuclear program.

The conflicts of interest between Moscow and Tehran in energy policy go deeper and go back a long time. Back in 2021, Iran announced the discovery of a major oil and gas field on its Caspian Sea territory. According to experts, however, Iran has pledged to Russia not to exploit the field for twenty years, and if that happens, Russian companies would get the contracts for exploitation.

There is a second reason why the Caspian Sea is causing rifts between Tehran and Moscow. Iran has still not ratified the Convention on the Legal Status of the Caspian Sea, agreed between the riparian countries in 2018. In Soviet times, a bilateral treaty granted Iran 50 percent of the inland sea. The new convention, in which Azerbaijan, Kazakhstan and Turkmenistan also participate as neighboring countries in addition to Russia and Iran, reduces Iran’s share to just over ten percent. Tehran does not accept that.

Finally, let’s return to the Bosphorus: Since the Cold War, in which Turkey successfully defended NATO’s south-eastern flank as an indispensable bulwark against the Soviet Union, its importance has continued to grow. Russia’s route to the warm seas of the world leads through Turkey’s two straits: the Bosphorus, which connects the Black Sea with the Sea of Marmara, and the Dardanelles, which connects the Sea of Marmara with the Aegean Sea. A long border connects the country with Syria, Iraq and Iran, which can pose a threat to the West for various reasons. In addition, Turkey, with its gas pipelines from Central Asia and Iran, is an indispensable energy hub for Europe. Its importance for Europe’s “Southern Gas Corridor” will continue to increase in the post-Russian gas era. This makes it clear, at least to Sultan Erdogan, that he can continue his game, no matter what “partners” he is surrounding himself with. The West and Europe should be prepared for this.