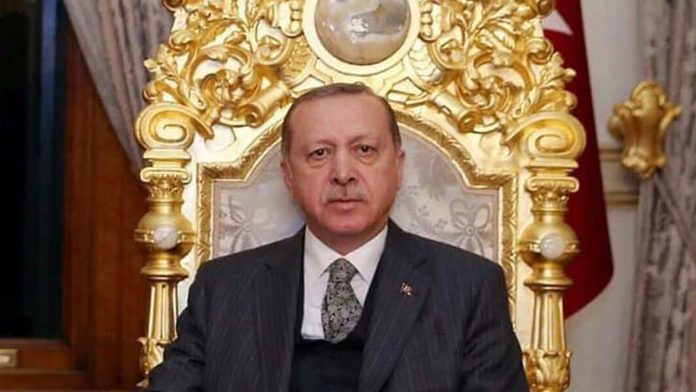 The Turkish President uses history more and more openly as a means of politics. In elaborately produced propaganda videos, he tries to build on a glorious past and legitimize his revisionist foreign policy.

Years ago, Erdogan liked to pose with guards in historical costumes. In the meantime he has discovered new means of presenting himself as the revenant of the sultans.

Erdogan has been using history to legitimize politics for a long time and is trying to tie in with the Ottoman past and re-occupy it positively. For years, he has been naming bridges and ships after Ottoman sultans. The republican holidays are increasingly being replaced by the anniversaries of historical battles like Preveza in the state’s politics of remembrance. But never has the instrumentalization of the past been so obvious as in a most recent propaganda video.

Ottoman galleys go into battle with billowing sails, gunpowder smoke is in the air, Admiral Barbaros holds up his saber – A modern Turkish frigate passes the Dardanelles Strait, an officer kisses the Koran, and an on-board task force races across the sea on a speedboat – Admiral Barbaros celebrates the victory over the Christian fleet – President Recep Tayyip Erdogan walks through a trellis of Turkish flags, waving. And with that a recent video ends.

Not often have the present and the past been so closely interwoven and history so politically motivated as in the short film that the Turkish government produced on the anniversary of the Battle of Preveza at the end of September. In the naval battle in 1538, a fleet under Barbaros Hayrettin Pasa challenged a Christian alliance under the leadership of Pope Paul III off the Greek coast, defeated and thus secured the dominance of the Ottomans in the Mediterranean for decades.

The five-minute video that Erdogan’s communications director distributed on September 28th places the Turkish Republic in the succession of the Ottoman Empire and presents President Erdogan as heir to the victorious seafarer Barbaros. It was of course no coincidence that the video was published right in the middle of the conflict with Cyprus, Greece and the European Union over natural gas reserves in the Mediterranean.

“The historical image spread by Erdogan is full of clichés and has nothing to do with historically guaranteed reality,” says one professor for Turkish history at Oxford University. He build a picture as it suits him. He refers to the great conquerors from the phase of Ottoman expansion in the 16th century, but not to the reformers who tried to modernize the empire in the 19th century. “This is a misunderstanding of history.”

Instead of the established republican holidays, Erdogan prefers to celebrate Ottoman victories, as in the naval battle of Preveza in 1538.

Erdogan broke with the longstanding Turkish foreign policy, which, with the exception of the occupation of Northern Cyprus in 1974, refrained from intervening abroad, says the professor. Now he is trying to legitimize his new, expansive and revisionist foreign policy through a different view of history and at the same time to contribute to the development of a patriotic anti-Western identity. In this respect, his view of history is by no means harmless.

With the video of the Battle of Preveza, Ankara underlines its claim to supremacy in the Mediterranean. In one sequence, behind an officer on the bridge, a picture of Atatürk, the founder of the Republic of Turkey, can be seen with the slogan: “Soldiers, your first destination is the Mediterranean.” In another sequence, sailors form the words “Blue Fatherland“ on the deck of a warship – the name of a new Turkish military doctrine in the Mediterranean. Underlying the video, a text says:

“I am the son of a martyr, listen, oh world, do not forget, I am the son of the moon and star land, the blood of my ancestors flows in my veins, we are dying for the blue fatherland.”

In another video, which the government published on August 24 to mark the anniversary of the Battle of Manzikert, nationalist motives are the core. The video interweaves the time levels and fades seamlessly from the Battle of Manzikert, in which the Seljuq Alp Arslan defeated the Byzantine Emperor Romanos IV Diogenes in 1071, over the Dardanelles, where the Turks fought back the Allies in 1915, to the present.

The picture shows first the memorial for the Battle of the Dardanelles in World War I, then the memorial for the martyrs of the night of the coup on the Bosporus Bridge in Istanbul. In the end, Sultan Mehmet the Conqueror, accompanied by other heroes of Ottoman-Turkish history, marches into Hagia Sophia, which Erdogan converted into a mosque again in July, before the Temple Mount in Jerusalem is displayed as the last image.

The title of the video refers to the “Red Apple”, which in the Ottoman tradition stood for the imperialist aspirations of the Turks and symbolized first Constantinople and Budapest, then Rome and Vienna. Today, the video suggests, it is Jerusalem. You don’t have to be a connoisseur of Turkish history to understand the message, when the video fades directly from Sultan Mehmet the Conqueror to President Erdogan.

The aesthetics of the videos tie in with the popular historical dramas that have enjoyed success in film and television for years. Films like “Fetih 1453”, which tells the story of the conquest of Constantinople by the Turks, or the series “Muhtesem Yüzyil” (The Magnificent Century), which is set in the time of Sultan Süleyman the Magnificent, served the fascination of the Turks for the long suppressed Ottoman history.

It is no coincidence that the government’s propaganda videos are similar to these period films, as they are often made by the same directors, musicians and producers. For some, the music was arranged by Yildiray Gürgen, who was also involved as a film composer in the historical drama “Payitaht Abdülhamid”. Ali Sinanoglu, who has also composed the AKP’s campaign songs for years, also plays a central role.

Sinanoglu, who started his career as an advertising entrepreneur, interweaves religious and nationalist motifs in his texts and is not afraid of pathos. In the catchy and pompous refrain of “Yeni Erdogan Marsi”, which Sinanoglu composed after the attempted coup in July 2016, Erdogan is sung about as a man with a lion heart, a fighter for justice and the leader of the “ummah”, the Muslim community.

A Turkish independent journalist noted in an essay on the past in popular culture and the image of the Ottoman Empire on Turkish television, film and television play a central role in conveying history, because books, newspapers and magazines are only read by a minority in Turkey. The AKP has taken up the fascination for everything Ottoman, at the same time it itself nourishes the turn to the past.

“By returning to a glorious past, the AKP is trying to strengthen pride in the nation, Islam and Turkishness and to divert attention from the economic crisis,” the journalist says. Whether this will work for a long time is questionable. However, it is not only the AKP that is “obsessed with history”: Turks of all parties have sought their salvation in history. This obsession with history distracts from the present and obscures the view of the future.