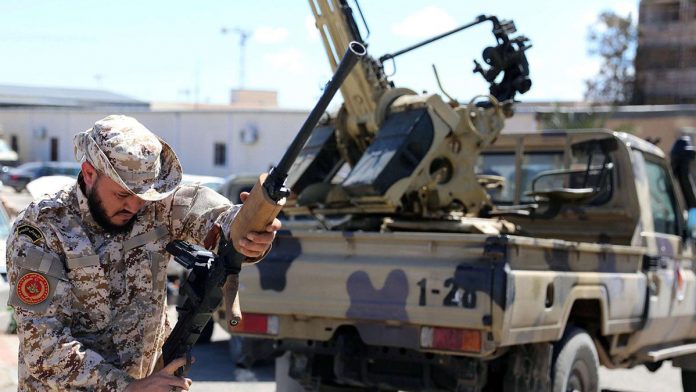 Twelve months have passed since German diplomacy, with its the Berlin Libya Conference, attempted to settle the ongoing war. At the invitation of Chancellor Merkel, heads of state and government as well as foreign ministers from eleven countries – including heavyweights like Presidents Erdoğan and Putin – came together in January 2020 and agreed to support the efforts of the UN special envoy for an internal Libyan political process and a UN arms embargo.

The prospects for a return to sustainable stability in Libya today remain bleak. It is true that General Khalifa Haftar suffered a defeat in western Libya in the early summer of 2020, shaken by counterstrikes by associations of the Government of National Unity (GNA), which Turkey – it escalated its intervention in the conflict last winter.

In addition, direct talks between military representatives of the Libyan conflicting parties in the „5/5“ format, which resulted in a formal ceasefire in October, as well as the Libyan Political Dialogue (LPDF) have been ongoing since autumn. That assembly only agreed earlier previously on a process to establish a unity government, a requirement for the upcoming December elections.

The German Government supports these discussions and efforts of the responsible UN mission UNSMIL as best as it can. However, UNSMIL is confronted with a complex list of external actors, who, through their struggle for loyalties and zones of influence, reduce the chances of a political solution – and sometimes forge their own diplomatic initiatives: from Russia to Morocco to Egypt.

Russia, the United Arab Emirates (UAE) and Turkey in particular have consolidated their influence in Libya in 2020. Along the front line from the coastal city of Sirte to the Al-Jufra air base in central Libya, GNA forces and Haftar’s troops – supported primarily by Russia, Egypt and the UAE – are still facing each other.

How difficult it is to enforce the arms embargo was last shown by a German-Turkish conflict last November, when Turkey prevented a German frigate in the eastern Mediterranean from inspecting a freighter. Emirati and Turkish drones, Russian MiG-29 fighter jets, the Russian group Wagner and Syrian mercenaries are just the most prominent instruments used by external actors in Libya today.

The agreed deadline for the withdrawal of all foreign fighters from Libya by January 23 seems utopian against the background of this potpourri of military resources. And the decision of the Turkish parliament shortly before Christmas to extend the army’s deployment in Libya by a further 18 months will also have been registered in Abu Dhabi, Cairo and Moscow.

While Turkish and Russian diplomats also politely profess their support for the UNSMIL efforts, the impression is meanwhile emerging that Ankara and Moscow are cooking their own soup – as in their bilateral talks on Syria and Nagorny-Karabakh. Although a solidified Russian-Turkish condominium in Libya due to resistance from other actors seems unlikely, high-ranking diplomats from both sides discuss the situation in Tripoli and Tobruk surprisingly often, as most recently in Sochi shortly before the end of the year.

At the same time, the Russian Foreign Ministry regularly tries to put obstacles in the way of UN diplomacy, whether through criticism of the selection of the LPDF participants, or expressions of doubt about the expediency of the elections planned for December. In addition, Russia cultivates its own relations with various Libyan actors in order to secure influence, no matter where the political wind in Libya blows in the future.

Since Russia officially denies any military presence in Libya and thus maintains plausible deniability, Moscow has wide opportunities to exert influence, including in Libya’s energy and financial policy.

And here one no longer only works with Haftar, but instead tries to cultivate and expand the loyalty of alternative Libyan actors: from Parliament President Saleh to former Prime Minister Miitig from Misrata, to supporters of the former Gaddafi regime.

The US Africa Command (AFRICOM) has expressed concern several times over the past year about Russia’s aspiration to permanent military bases on NATO’s southern flank, and implied that Emirati funds could help fund the Wagner group.

And so, despite Germany’s honest efforts in the context of the Berlin process, the decisive external actors remain noticeably unaffected by international mediation attempts and pleadings. Above all, Russia and Turkey – whose influence a political agreement would limit, which is why they prefer to keep the conflict on the back burner – succeeded in filling a vacuum in Libya.

This vacuum was created by Europe’s disagreement (such as France’s policy of supporting Haftar), insufficient international pressure on the UAE, Egypt and Russia, and months of US disinterest. In the meantime, the US calculation of viewing Libya as a zero-sum game with Russia and hoping for a complete breakdown of the Russian-Turkish collaboration is hardly a realistic option.

The so muddled situation and complexity of the external influences should prevent the architects of the Berlin process from criticizing the Berlin process with a raised index finger and from teaching them with general alternative suggestions. However, it seems indisputable that disagreement between EU states, especially Germany, France and Italy, has severely undermined their credibility in the eyes of Libyans too.

Between Russia and Turkey, all that glitter is not always gold, but when it comes down to it, Moscow and Ankara work together to create facts. It now remains to be seen whether the new US President Joe Biden will pay greater attention to the Libyan conflict.

That could make a decisive difference, if one assumes that the interests of the external actors present in Libya remain incompatible. In view of the range of domestic and foreign policy construction sites the new US administration has to offer, a revival of US Libya policy is hardly to be expected. So Europe will have to keep doing its homework.