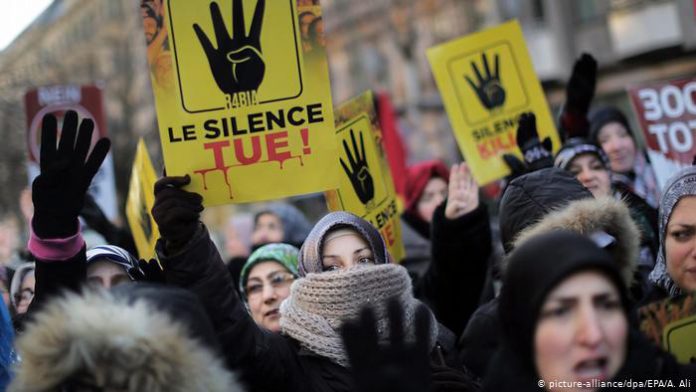 Those actions include new financial structures by the Islamist movement, trying to fund institutions and communities in Europe without the possibility of identifying the true investors from countries like Qatar or sponsors being known as supporters of the Islamist legalistic movement.

But critics also appear to be active: As reported some weeks ago, the European Parliament had issued informations about gigantic financial streams by „Europe Trust“, being moved from England to the European continent.

Europe Trust is a United Kingdom based company and charity which was first registered as a charity in 1996. The 2005 financial report says that the principal activity of the company “was that of to establish a portfolio of assets (awqaf) businesses and investments to generate resources to fund social and economic projects for communities in Europe.”

Europe Trust has purchased a property in Berlin’s Wedding district for four million euros. Several associations and groups have moved in there that are being monitored by the German State Office for the Protection of the Constitution.

The London newspaper „The Times“ said Europe Trust has land assets worth more than £8.5 million and sends rental compensation from its property to an easygoing association of Brotherhood-associated relationship across the EU, including the Islamic Association of Britain, which the public authority depicts as the „branch of the Muslim Brotherhood in the UK.”

The interreligious project “House of One” in Berlin, part of the project mentioned above, is a 43.5 million building, also co-financed by donations from all over the world. The controversial Qatar Foundation International is also involved: since November 1, 2018, it has been funding six positions in the field of education.

Qatar Foundation International is part of the private Qatar Foundation and was founded in 1995 by Sheikh Hamad bin Chalifa Al Thani. It primarily supports educational and scientific projects. After the sponsorship agreement with FC Barcelona in 2010, the Foundation came under criticism because it was also supposed to be a donor to Hamas and maintained contacts with the Muslim Brotherhood’s chief ideologist Yusuf al-Qaradawi.

The question now is: Can German authorities like the Senate in Berlin accept a foundation that US and EU intelligence call an organization supporting an extremist ideology, neglecting Western values?

The spokeswoman of the „House of One“ could not say how high the financial contribution of the Qatar Foundation is. So far, Qatar Foundation International has mainly been active in the US, but they are also trying to gain a foothold in Europe.

Islamism expert and author Ahmad Mansour finds it problematic that the Qatar Foundation International is active in the “House of One”: “It has connections to Islamist organizations that have no business in Europe,” he says, “through the financial support gambles away the very welcome House of One project sympathies.”

Most recently, the entrepreneur Catherine von Fürstenberg-Dussmann withdrew from the interreligious project because of the extremist Muslim associations supporting the project“.

Meanwhile, the „Islamic Center of Geneva“, led by the controversial Hani Ramadan, is enlarged with the blessing of the region’s Canton. The 300 m2 premises of the mosque will be replaced in favor of a 900 m2 building. Ramadan calls for a large collection of donations on its website in order to quickly reach the goal of five million Swiss francs. So far CHF 805,984 have been raised.

A petition against the project was already submitted in June 2021, entitled “No to developing a Muslim Brotherhood base in Geneva”.

Hani Ramadan is the grandson of Hassan al-Banna, the founder of the extremist Muslim Brotherhood. Ramadan’s statements about Sharia made headlines several times in Switzerland and France. A quick look at his Facebook page reveals his affiliation with the Muslim Brotherhood.

While supporters of the Muslim Brotherhood often underline the movement’s peaceful approach, without violating European laws and values, for the first time a prominent former leader of the Brotherhood has confirmed that, contrary to their public statements, the Brotherhood does indeed support and encourage acts of violence.

Kamal Al-Helbawi, the former spokesman for the Muslim Brotherhood in Europe, admitted that the group is ideologically influenced by the approach of Sayyid Qutb, which laid the groundwork for jihadist extremism, despite their openly declared tolerance and repeatedly claimed adherence to peaceful means prone to violence.

In a statement published in an article on an Arabic website a few days ago, Al-Helbawi wrote:

I saw with my own eyes that within the Muslim Brotherhood there were deviations from the actual Islamic project, the foundations of which were laid by Hassan Al-Banna and not by Sayyid Qutb. Some of these discrepancies are evident in the persistence of aspects of secrecy in the group’s work, as well as in the increasing tendency towards violence, which is discernible despite the slogans for peace that were repeatedly raised.

Al-Helbawi is considered one of the historically significant and prominent leaders of the Muslim Brotherhood, and his testimony is explicit endorsement by a (former) senior member of the group’s violent tendencies. At the same time, Al-Helbawi’s remarks stand in contrast to the tolerant face that the Muslim Brotherhood, especially in Europe, is so fond of showing and allegedly inclined towards integration into society and towards dialogue.

“The true face of the Muslim Brotherhood is Hassan Al-Banna, who pioneered terrorism and secret armed action. Al-Banna’s ideas always lead to violence and terrorism and the use of arms to gain power.”