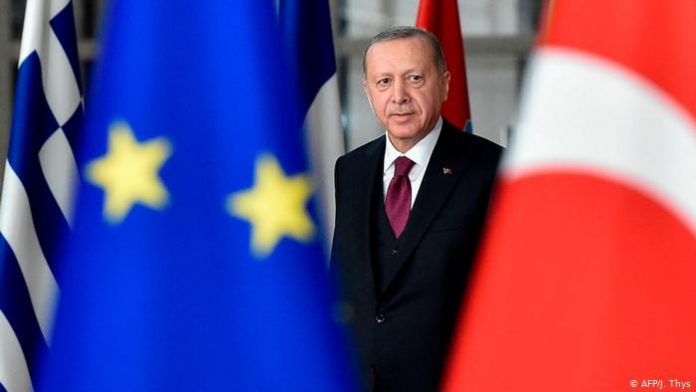 The European Union is approaching Turkey again – although there have been setbacks in terms of the rule of law and fundamental rights. The government in Ankara is at least de-escalating its foreign policy and is thus accommodating the Europeans. However, before any negotiations, for example on a new refugee pact or the modernization of the customs union from 1996, the EU wants to explore the scope for this. She has to make sure that the Turkish leadership is serious about a constructive dialogue. That is why EU Commission President Ursula von der Leyen and EU Council President Charles Michel traveled to Ankara yesterday to meet with Turkish President Recep Tayyip Erdogan.

Michel had already signaled an expectation for Ankara when he arrived. While von der Leyen had traveled directly from Brussels, Michel had visited Libya and Tunisia the days before. In Libya he met the leadership of the new transitional government and the new presidential council. His statement was also addressed to Ankara that the withdrawal of “all foreign fighters and soldiers” was a prerequisite for a “stable, united, sovereign and prosperous Libya”. After meeting Erdogan, he spoke of “new opportunities for peace”.

Before this meeting, von der Leyen and Michel had only one other item on the agenda: They spoke to representatives of the UN organizations that deal with refugee issues – the UNHCR refugee agency, the Unicef ​​children’s aid agency and the International Organization for Migration. Representatives from UN Women were also present. After all, Erdogan had declared Turkey’s withdrawal from the Council of Europe’s Istanbul Convention on the protection of women from violence a good two weeks ago. Von der Leyen commented she was “very concerned”. It is very unlikely that Erdogan will reverse his decision.

Meetings were not planned with opposition parties or the civil society. The heads of state and government had stated on March 25th that the state of the rule of law and fundamental rights in Turkey continued to give “cause for great concern”. Von der Leyen and Michel did not come to Turkey to urge an improvement in the domestic political situation, even if they brought this up with Erdogan. Foreign policy and strategic considerations were in the foreground. This disappointed the opposition in Turkey and the human rights organization “Human Rights Watch” wrote that there could be no “positive agenda” violating EU values.

The heads of state and government had specified such a “positive agenda” in their summit declaration. It states that the EU has “a strategic interest in a stable and secure environment in the Eastern Mediterranean and in the development of a cooperative and mutually beneficial relationship with Turkey”. It therefore welcomes “the recent de-escalation in the Eastern Mediterranean with the cessation of illegal drilling activities, the resumption of bilateral talks between Greece and Turkey and the upcoming talks on the Cyprus issue under the auspices of the United Nations”. The EU foreign affairs representative, Josep Borrell, recently expressed himself in this spirit. He identified three major foreign policy areas of conflict with Turkey – along with Libya and Syria, the eastern Mediterranean – but only one domestic policy area, the “deterioration in democratic standards”.

The reason that Turkey has been de-escalating since last autumn, that it disarmed in its language and ready to talk is that its aggressive military policy in the eastern Mediterranean has reached its limits and that the economic crisis is worsening. The number of unemployed is not increasing because the government has issued a general ban on dismissal. In the past twelve months, however, the Turkish lira has lost 25 percent of its value after international investors lost confidence in the economic policies of the Turkish leadership.

Under these conditions, the EU offers Turkey a restart of relations. In Ankara, Michel reiterated a phrase from the March 25 declaration, saying that it was ready to “liaise with Turkey in a graduated, proportionate and reversible manner in order to step up cooperation in a number of areas of common interest”. However, this is conditional on the current de-escalation continuing and Turkey entering into a constructive dialogue.

This is a “conditioned optimism”, commented the independent Turkish policy observer Murat Yetkin. For example, the EU is offering Turkey to talk about a positive economic and trade agenda if Turkey resolves conflicts through dialogue and in accordance with international law. If they behave differently, the EU could threaten the country with new sanctions. However, the EU has an interest in preventing a deterioration in relations with Ankara. Otherwise, it is feared, Turkey could stop cooperation on migration policy and the conflict with Greece and Cyprus could escalate again. The importance of migration policy is shown by the fact that von der Leyen traveled on from Ankara to Amman to talk to the Jordanian king about the Syrian refugees in his country.

There are three items high on Ankara’s wish list. New financial resources are required to support the four million Syrian refugees in Turkey so that they do not make their way to Europe. The six billion euros pledged in the 2016 refugee agreement have already been spent or firmly planned. Decisions on new funds are expected soon. There could be resolutions at the summit in June. However, the other two points are tied to Turkish good conduct. The EU had already made commitments to both in the 2016 Refugee Pact.

On the one hand, Turkey is pressing for a modernization of the customs union, which should give its crumbling economy a boost by including agriculture and services. The EU summit on March 25 issued a mandate to begin preparations for such a modernization. On the other hand, Ankara is hoping for the visa simplifications promised in 2016. So far, they have also failed because Turkey does not want to change its far-reaching anti-terror laws. On this point, too, the March 25 declaration indicates progress. In contrast to the continuation of the refugee pact, however, there should be no quick decisions on these two points.