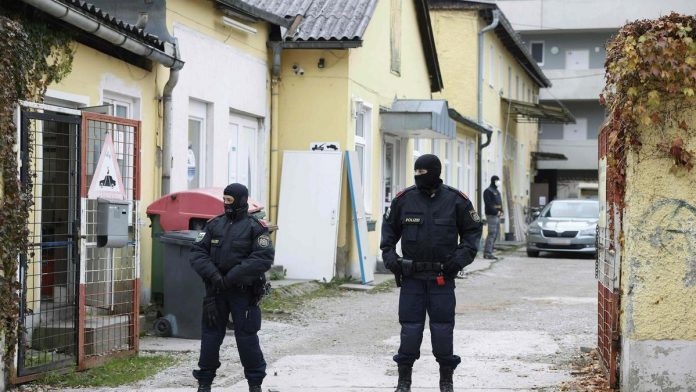 In „Operation Luxor“, Austrian police and special forces searched private premises, clubs, real estate companies in connection with the actions of the Islamist Muslim Brotherhood and Hamas in Austria, almost 1,000 police officers were on duty.

The people involved are accused of providing financial and ideological support to the radical Islamic Muslim Brotherhood and Hamas, and organization which is banned in several EU countries, but not in Austria.

The preliminary investigation is ongoing on suspicion of financing terrorism, a terrorist organization, subversive association and the establishment of a criminal organization.

From the information so far, a connection with the terror attack on November 2 in Vienna can be ruled out.

According to people involved in the investigation, an association with locations in Vienna and Graz should play a central role. A high-ranking ex-member of the association is likely to have belonged to the closest circle of the late Egyptian President Mohammed Morsi.

Other representatives of this association (who are also listed as accused) stated on an Egyptian TV station that they did not believe in the separation of religion and state. That is “just a slogan in Europe”.

It is now also known that beside this link to Egyptian Muslim Brothers, the Austrian police also searched the premises of a religious institution belonging to a former president of the IGGÖ (Islamische Glaubensgemeinschaft Österreichs), the official umbrella organization of all Muslims in Austria with close links not only to the Arab Muslim world, but also to the Turkish AKP and the religious authorities in Ankara.

House searches of two alleged co-founders of the Austrian Muslim Brotherhood were also confirmed – officially, the organization has no representation in the country. One of them is a former IGGÖ cultural advisor, the other is the financial advisor of the Islamic Religious Education Institute (IRPA). The centre is responsible for the training of Islamic religion teachers at compulsory schools and belongs to the IGGÖ.

The investigators also targeted an Austrian political scientist, who teaches at Salzburg University, specialized in „Islamophobia“ research. The scientist collaborates with the SETA Institute in Turkey, a biased think tank financed by the AKP and its chairman, Turkey’s President Erdogan.

In the course of the investigation, however, numerous videos came to light that are supposed to show how active the Muslim Brotherhood is in Austria. High-ranking international representatives of the Brotherhood are said to have been guests in Vienna and participated in events on several occasions.

Videos show participants presenting the „R4bia“ symbol – a symbol of the Muslim Brotherhood. At the events, children and young people sing songs in which they wish that they would be “perfumed as martyrs for Egypt” – and thus to die for the goals of the Muslim Brotherhood. At another event, children shouted: “I am no coward! I’m dying in the field!”

The Austrian authorities suspect that terrorist financing is being carried out via sub-organizations of the Muslim Brotherhood in Europe, especially in Austria. Most of the money comes from Qatar. It is forwarded through associations, foundations or companies in Austria. Revelations around the offshore leaks of the “Panama Papers” have brought an interesting lead. One of the leading people from Vienna, a 37-year-old academic, runs a mailbox company in the tax haven Isle of Man. From there, there are links to Liechtenstein and Dubai, England, Morocco, Saudi Arabia and other countries.

The association that operates branches in Vienna and Graz is again named as the interface in the investigation files. In 2015, two million euros are said to have been transferred from Qatar to the club’s account. This money should be used for proselytizing in Europe. In any case, several accounts were frozen.

Among the accused is an imam, who was removed from his mosque for his radical sermons. Among other things, he is said to have preached: It is forbidden to congratulate unbelievers on their practiced faith. “It is like prostrating before their cross (…). Therefore, congratulating an unbeliever on Allah is much worse than congratulating someone for drinking or adultery or killing.”

Leaders of the Islamic Community can also be found in the suspect group. In addition, a number of Islamic religion teachers are said to belong to the network. According to investigations, they are accused of influencing children with “questionable ideologies that are in direct contrast to the applicable values ​​in Europe“.

A politician, MP of the local Vienna state parliament and born in Iraq, also appears in the investigation files. His name appears in connection to a school project that the Muslim Brotherhood planned to build in Vienna, and in a wiretapped conversation between a suspect and the politician on June 25, 2020. An alleged Muslim Brother asks whether the politician forwarded his request to the mayor of Vienna; the MP then said that this should not be an issue before the election, but afterwards.

In another phone call by two suspects, it is said that the MP spoke to the City Councilor for Education. He promised to give notice if he heard about abandoned schools, that could be used for the Brotherhood school project. The third phone call is also about whether the mayor already dealt „with the matter”.

In the past, many Arab organizations in the West, not engaged with official Islamic institutions, together with European think tanks already delivered information on the influence of the Muslim Brotherhood in Europe and Austria to state authorities, without any success of being heard.