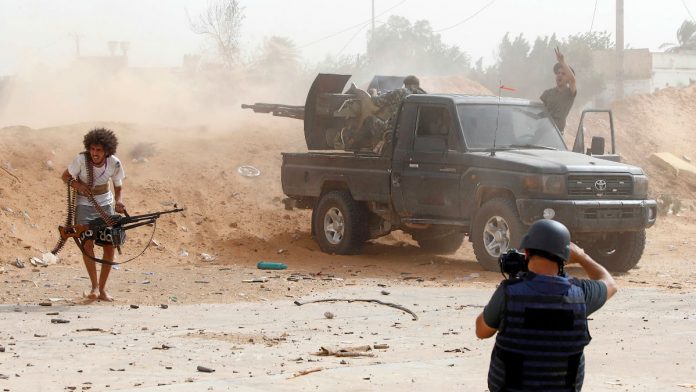 After almost ten years of civil war, confidence and also pessimism in Libya were mixed together at the end of this year. Last Friday, the warring parties fulfilled an important part of the agreement signed two months ago for a permanent ceasefire and exchanged prisoners for the first time. However, external actors Russia and Turkey are also using the ceasefire to consolidate their influence, while the West’s attention is on fighting the coronavirus pandemic.

In Libya, fear is growing that the country could be divided like in Sudan. Turkey supports the government in Tripoli in western Libya, Russia supports the rebel general Khalifa Haftar in Benghazi in the east.

The prisoner exchange took place in the city of Schwairif in the Libyan desert. Details were not disclosed. In the agreement for a permanent ceasefire, which was signed in Geneva on October 23 with the mediation of the United Nations, both sides had agreed on an exchange of all prisoners. How many were released on Friday was not disclosed. At the same time, the Turkish Defense Minister Hulusi Akar was with the Turkish troops in Libya. Immediately before that, the parliament in Ankara had extended the mandate to send troops by another 18 months, which it had first approved in December 2019.

At the same time, Russia is expanding its military presence with the aim of controlling the north-south axis in the center of the country, which runs from the port city of Sirte to the Jufra air base in the south, where Russian Air Force is stationed.

The agreement for a permanent ceasefire was a success for the UN and its representative Stephanie Williams, as she was able to take the reins of action again with regard to Russia and Turkey. Through her mediation, five leading military officers from Tripoli and five from Benghazi had come to an agreement. As a central component, the agreement negotiated by the “5 + 5 Joint Military Commission” provides for the withdrawal of all mercenaries and foreign fighters within three months. As a confidence-building measure, scheduled flights between Tripoli and Benghasi were resumed for the first time in October.

But Turkish President Recep Tayyip Erdogan immediately dampened expectations and said the agreement was not realistic. Both sides accuse each other of violating the ceasefire, but without major fighting having broken out. While Russia and the United Arab Emirates expand their bases around Jufra, the Turkish-backed troops of the government of Tripoli are supposed to move south on the axis of Sirte. Due to the expansion of the Turkish and Russian presence, the conflict could break out again at any time, comments the International Crisis Group in Brussels. On the other hand, it sees no signs that this is happening now. Neither in Tripoli nor in Benghazi there was any support for fighting to flare up again. In addition, the attempt to resolve the conflict in the Persian Gulf between the United Arab Emirates and Qatar could also have an impact on their proxy war in Libya.

The negotiating partners make the greatest progress on economic issues. On December 16, the Central Bank’s board of directors met for the first time in five years with members from both Tripoli and Benghazi. They agreed on a devaluation of the national currency and a roadmap to standardize exchange rates. The breakthrough, however, would only be an agreement on the use of the proceeds from oil exports.

The least progress has been made in finding a political solution. The meeting of the “Libyan Political Dialogue Forum”, at which the composition of the three-member Presidential Council was to be discussed, was boycotted by so many delegates that it did not take place. This shows once again that the new political class in Libya has become one of the greatest obstacles for the country. Libyans are already drawing the comparison to Iraq, where the political class has also been primarily concerned with benefiting and plundering the country since the fall of Saddam Hussein. The international community is accused of not including the influential tribes and their umbrella organization in the political process, even though they, far more than the militias, would be able to hold Libyan society together. The tribal candidate is Saif al Islam Gaddafi, the second son of the ruler Muammar al Gaddafi, who was killed in 2011. He had already announced his candidacy for a presidential election in 2018. In the last years of his father’s rule, he had campaigned for the country to open up and for a new constitution. He called for democracy and a parliament, had political prisoners released and had independent newspapers set up. His foundation became a kind of ombudsman to which citizens could turn and through which they could file complaints. However, it is by no means certain that the elections, which have been postponed several times, will finally take place at the end of 2021.