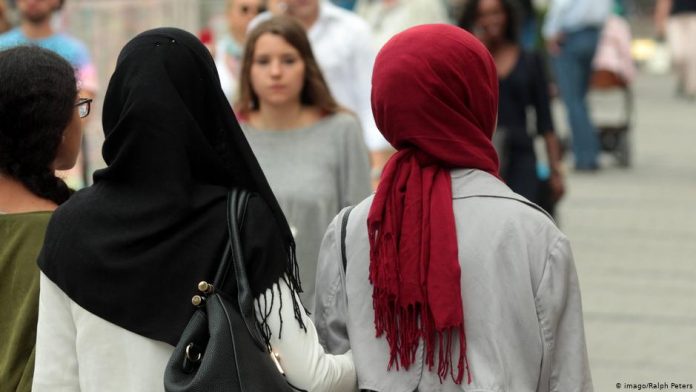 Many train or tram users should be familiar with the situation: While you are waiting for the train, someone nearby starts a phone call that you cannot ignore. Unintentionally, you are witness to numerous private dramas and discussions and within a few seconds the person calling is sorted into a drawer: handsome, nerdy, person with whom one would like to have a beer with.

A team of researchers from the London School of Economics in Great Britain and the Universities of Pittsburgh and Pennsylvania in the US used this situation for an experiment in order to gain knowledge about the discrimination against women wearing headscarves in Germany. The results of the study have just been published in the prestigious “American Journal of Political Science”.

The researchers used actresses making phone calls at 26 train stations in major German cities. The first group of women presented themselves as not migrants, the second group as migrants through their demeanor and statements about life in Germany, and the third group wore a hijab. All the women spoke loudly about an alleged sister who wanted to go back to work after the birth of her children. The statements on this varied: once the actresses sharply criticized the sister’s decision, another time they rated it as positive, or they were more neutral.

The women then apparently accidentally dropped a bag of lemons. Did someone help them pick up the fruit rolling on the platform? And did the reactions turn out differently depending on what attitude you had previously expressed?

The researchers’ first observation: When the content of the conversation was the same, there was no difference in the reactions of passers-by in the two groups without a hijab. In three quarters of the situations, the actresses were offered help. “However, this changed as soon as a woman wore a headscarf,” says one of the authors of the study. Then the proportion of situations in which help was offered was around eight percentage points lower. “We prove that women with a headscarf in Germany are systematically treated differently in their everyday life than people without a headscarf.” The researchers see this as a scientific confirmation of the numerous reports by women wearing headscarves about discrimination in everyday situations.

The second finding: the content of the phone call only influenced the behavior of passers-by in the case of the actresses with the hijab. If they showed a progressive worldview by praising their supposed sister for going back to work, they were helped much more often than those wearing headscarves who showed a more conservative family image. For women without a headscarf, the content of the phone call made no difference.

The researchers see the result as evidence that many people automatically adopt very conservative values ​​in women who wear headscarves. “In fact, the results of numerous studies show that such prejudices are wrong or out of date. The values ​​of people with a migration background are considerably more similar to those of the majority society than many think.” The researcher also draws attention to an unfair double standard: “While women with headscarves were discriminated in our experiment if they revealed a conservative view of the world, this was not the case for women without a headscarf and a migration background.”

Another interesting detail in the results of the investigation: Although male and female passers-by discriminated equally against wearing headscarves, only women behaved differently if they had previously overheard a progressive phone call. To make sure that the majority of the 3,700 passers-by involved in the experiment perceive the phone call as progressive in their own way, the researchers chose the topic of work and family because attitudes have changed significantly in recent decades. Whereas in 1980 three quarters of women in Germany agreed that women should primarily look after the children while the husband was earning money, in the mid-2010s it was only 20 percent. A survey of men’s attitudes on this issue is not mentioned in the study.

Against the background of his results, the experiment formulates clear demands on politics to reduce discrimination and prejudice. It is important to create spaces in which people with and without a migration background can meet and create a common identity, it says. “Mere contact between people with different backgrounds is not enough, it is important to do something together to create identity.” However, this is not the responsibility of people with a migration background; rather, research confirms that integration is a task for society as a whole.