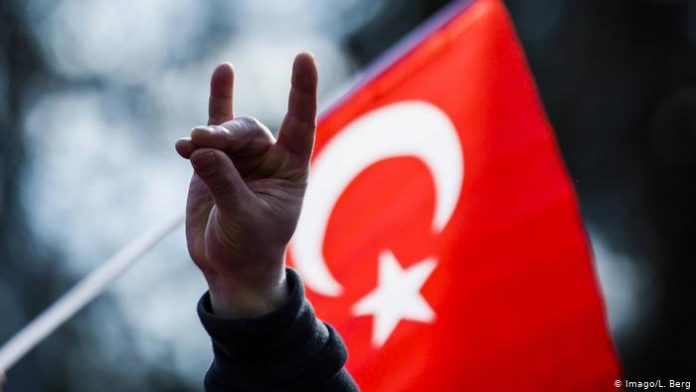 Already implemented in France, now Berlin seems to follow its neighbour: The right-wing extremist Turkish organization “Gray Wolves” could soon also be banned in Germany. A motion by all parties passed the German parliament.

The Social Democrats (SPD) also support the move. MP Uli Grötsch (SPD) justified the step by stating that the so-called “idealists” should be classified as right-wing extremists. The “Gray Wolves” are also called “Ülkücü” – in English: idealists. “We fight right-wing extremism regardless of whether it is German, Turkish or any other right-wing extremism. The Gray Wolves also fall into this category, ”the politician said, who is also the deputy chairman of the German-Turkish parliamentary group.

“We are sending a clear signal.” Now, the Federal Ministry of the Interior, as the competent authority, will examine a ban on the Turkish nationalists.

“A fascist and racist ideology”

Christoph de Vries, CDU MP and also a member of the Interior Committee, justified the initiative of his group with the fact that “the ultra-nationalist ideology of the ‘idealists’ is inhumane”. They are a threat to the free democratic order in Germany. “Fascist and racist ideologies that degrade other religious and ethnic groups have no place in this country,” said de Vries, who is one of the party’s main proponents of a ban.

The “Gray Wolves” and their affiliated associations are under observation by the Federal Office for the Protection of the Constitution (BfV). There are at least 11,000 followers in Germany, according to the annual report of the federal authority from 2019. The report points out that there are organized associations and unorganized representatives who communicate via the Internet. They are convinced that they belong to a superior Turkish “race”. Kurds, Armenians, Greeks, Jews and Americans are defined by them as enemy images.

The Federal Ministry of the Interior also brought up a nationwide ban on such associations and organizations. But the legal hurdles for a ban are high. Since the German Law on Associations came into force in 1964, 57 associations and 106 substructures, mostly right-wing extremist or radical Islamist associations, have been banned. The constitution protection report lists 93 of them in the category “foreign extremism” – including the “Gray Wolves”.

Connections to the Turkish state

That is why opposition politicians have long been calling for a ban. The interior expert of the Left Party, Ulla Jelpke, for example, describes the “Gray Wolves” as a “deadly threat” and refers to a case from 1980 when the trade unionist Celalettin Kesim was murdered by a supporter of the ultra-nationalists in Berlin Kreuzberg. There are also indications, according to Jelpke, that there are connections between the “Gray Wolves” and the Turkish state. A parliamentary question in the summer would have revealed that some of the right-wing extremists were employed by the Turkish secret service MIT. MENA Research already reported about the actions in the German Parliament and the government’s reaction.

Representatives of non-governmental organizations in Germany also welcome a ban on the Turkish right-wing extremists. Osman Okkan, spokesman for the board of the „KulturForum Turkei-Deutschland e.V.“: “Through the cooperation between the ‘Gray Wolves’ and their ‘mother organization’, the ultra-nationalist party MHP, a mainstay of Erdogan, they have gained more and more influence among young Turks in recent years throughout Europe.” Okkan also reports that there are more and more complaints about attacks on Armenians, Kurds and Erdogan critics.

“Gray Wolves” active all over Europe

According to the Office for the Protection of the Constitution, the most powerful and oldest organized representation of the Gray Wolves in Germany is the Federation of Turkish Democratic Idealist Associations in Germany (ADÜTDF), founded in Frankfurt am Main in 1978, to which 7,000 registered members and 170 local associations belong. According to the federal authority, the ADÜTDF has connections to the ultra-nationalist party MHP, the coalition partner of the Turkish ruling party AKP.

The second strongest association is the ATIB Union of Turkish-Islamic Cultural Associations in Europe. This umbrella organization was founded in 1987 by Musa Serdar Celebi. The Pope assassin Mehmet Ali Agca claims that Celebi gave him the murder weapon and the killer wages for the attempted murder of John Paul II in 1981. On the basis of an Italian arrest warrant, Musa Serdar Celebi was arrested near Frankfurt in 1982. He spent two years in custody in Italy. He was later acquitted for lack of evidence. The Turkish secret service MIT is also said to have reported in a strictly confidential file from 1982 on the close connection between Agca and Celebi, from which several Turkish media quoted in 2000.

“Idealistic” groups are organized across Europe. In 2007, the umbrella organization of the Gray Wolves in Europe was founded in Frankfurt am Main, which aims to bundle the various branches throughout Europe. Its long-time chairman Cemal Cetin from Germany has sat in the Turkish parliament as a member of the Turkish MHP since 2018.

At the beginning of November, the French government banned the French offshoot of the “Gray Wolves” because they were allegedly involved in acts of violence in France.

Mosque and club associations are a supporting pillar of the local Turkish nationalist movements. They have been active for decades and can politically influence a relevant section of the population of Turkish origin in Germany through their local mosque associations. In the facilities that are attached to the mosques – seminar and assembly rooms, kitchens and more – the own clientele is formed and held together. For a long time, Turkish nationalists were able to successfully maintain the appearance of “completely normal” associations in relation to the German-speaking public, claiming that their activities in the district did not follow any extreme ideology. So it is not surprising that the clubs are often part of local integration and city politics.

The largest Turkish nationalist actor is the Party of the Nationalist Movement (MHP), which supports the ruling AKP party of President Recep Tayyip Erdoğan in Turkey. The MHP was originally not a parliamentary party, but a fascist and violent organization. The „Gray Wolves” were responsible for a large number of political murders in Turkey in the 1990s. After the death of long-time party leader Alparslan Türkeş in 1997, the MHP under Devlet Bahçeli became more moderate and gained a larger following. In elections, it currently achieves around 16 percent of the vote. According to its self-image, the party consistently relies on the strength of the Turkish nation and prefers to fight with alleged enemies of the state rather than negotiate. This can be seen, for example, in anti-Kurdish and anti-Armenian, but also in anti-Semitic positions.

In Germany, MHP supporters are mainly organized in the umbrella organization ADÜTDF, also known as Türk Federasyon (Turkish Federation), to which the Ülkü Ocakları (idealist clubs) belong in addition to mosque associations. These are socio-political centers, especially for the youth. Here, young »Gray Wolves«, even more intensively than in mosque associations, are ideologically trained and integrated into party and association structures. The Türk Federasyon has around 7,000 members nationwide, making it one of the largest right-wing extremist groups in Germany.

The Turkish nationalist movement, however, extends beyond that and includes two other associations. The ATIB spin-off brings together around 120 mosque associations, concentrates on the organization of places of worship and is more moderate. It is precisely because of this that it offers Turkish nationalists, for whom the MHP and ADÜTDF are too »radical«, an opportunity to remain in the milieu of the »gray wolves«. The ATIB has at least 8,000 members nationwide. The ATB mosque association, which organizes around 20 mosque associations and is close to the Turkish Islamist Party of Great Unity (BBP), is much smaller. Overall, ATIB and ATB stand for a more Islamic and Islamist-oriented part in the spectrum of the »Gray Wolves«.