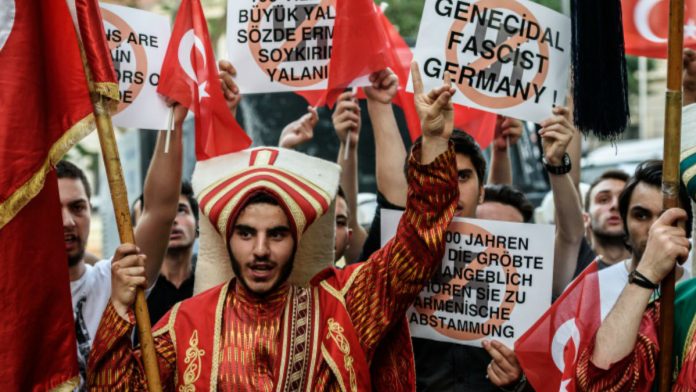 Following in the footsteps of France, Germany’s Left Party has called for the closure of the Federation of Associations of Turkish Democratic Idealists (ADÜTDF) — the umbrella organization of Turkish ultranationalist groups in the country, including the Gray Wolves. Germany’s Green Party has thrown its support behind Left Party’s call, saying that it will collaborate with other parties with regards to this issue.

Germany’s Left Party (“Die Linke” in Germany) has called for the closure of the Federation of Associations of Turkish Democratic Idealists (ADÜTDF), an organization that Berlin describes as the German branch of Turkey’s Nationalist Movement Party (MHP). The call came a day after France banned the Turkish ultra-nationalist Gray Wolves group linked to the MHP.

“The German Federal Government has to immediately take the example of France and needs to ban the Federation of Associations of Turkish Democratic Idealists (ADÜTDF), which is the umbrella organization of the ‘Gray Wolves’ in this country,” Deutsche Welle’s Turkish service quoted Left Party lawmaker Sevim Dağdelen as saying on Nov. 5.

Dağdelen described the ADÜTDF as “one of the biggest rightist organizations that is against the Constitution” in Germany, saying the group has 7,000 members and 170 local associations.

The right-wing organization attempts to “push Germany into polarization and division with provocations against Kurds, Armenians, Alevis, Greeks and Jews,” said Dağdelen.

“The Gray Wolves are closely linked to the rightist Turkish party MHP, which is the coalition partner Islamist ruling AKP, and to a fraction of the circle of President Recep Tayyip Erdoğan, who goes after and terrorizes those that think in a different way than him,” Dağdelen said, urging “zero tolerance for Islamist and fascist organizations.”

Three lawmakers from Germany’s Green Party, Cem Özdemir, Irene Mihalic and Konstantin von Notz, have also thrown their support behind Left Party’s call, saying that they will collaborate with other parties with regards to this issue and submit a joint motion to the parliament for all organizations linked to Turkey’s ultra-nationalists to be closed down.