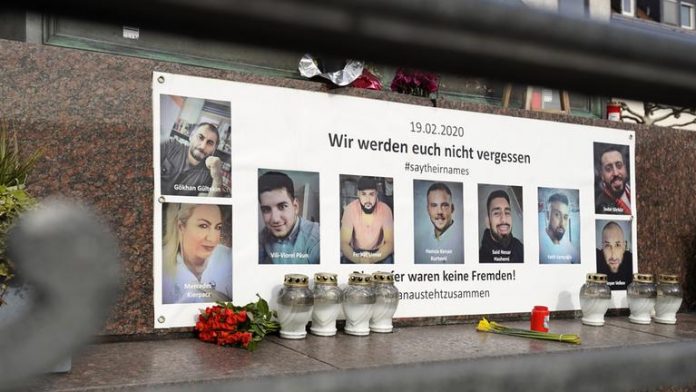 The victims’ relatives of the racist assassination attempt in Hanau raise serious allegations against the German authorities. They place their hopes in the investigations of Forensic Architecture – a fascinating but also controversial detective agency.

On February 19, 2020, Sedat Gürbüz, a 29-year-old was murdered in the racist attack in Hanau. Almost three years later, Emiş Gürbüz is standing on the stage in a conference hall in Berlin, although she makes no secret of how sadness and anger determine her memories and her life.

She didn’t come alone. She is accompanied by the relatives of the nine victims and survivors of the Hanau attack. And they are not only angry and sad, but also raise serious allegations against the municipal authorities, the German state of Hessen and the Federal Republic of Germany.

After the murder of Sedat Gürbüz, Gökhan Gültekin, Said Nesar Hashemi, Mercedes Kierpacz, Hamza Kurtovic, Vili-Viorel Paun, Fatih Saraçoğlu, Ferhat Unvar and Kaloyan Velkov, the assassin Tobias R. killed his mother and then himself. According to the police, he was a racist lone gunman. The German prosecutor’s office was unable to identify any instigators, accomplices and dropped the proceedings.

Even two years after the racist attack, the bereaved continue to live in fear. The public prosecutor is investigating again against the father of the Hanau assassin Hans-Gerd R. The 75-year-old is said to have stood several times in front of the house of the mother of the killed Ferhat Unvar and watched her. In the video we show how Serpil Unvar is dealing with the situation.

Serpil Unvar feels threatened. The father of the Hanau assassin has been standing in front of her house in Hanau several times for three weeks. The 75-year-old showed himself with his dog in front of her window and asked her arrogant questions on the street, the 47-year-old tells RTL-Interview: “Where do you get your money from? Why did you move to Germany? Are you Turkish? he asked me. I said that I am Kurdish, but from the Turkish side. Then he: Why did you leave the country? That’s psychological terror for me!” Serpil feels helpless, but moving away from the Hanau district is out of the question for her: “I don’t want to move. My son was born and raised here, went to school and died there. I don’t want to move from there.” In February 2020, Serpil lost her then 24-year-old son in the racist attack in the city in south Hessen. Now the father of the right-wing murderer stands in front of Serpil’s house almost every day and doesn’t leave her alone.

To counteract the situation, Serpil has taken police action and filed a complaint against the 75-year-old. She has been under police protection for a week. The 47-year-old mother is certain that something needs to be done. “If he’s mentally ill then he needs to go to a psychiatric ward or if he’s a racist and dangerous then he needs to go to jail. One of the two has to happen. Of course, I’m worried if the police aren’t there anymore, what he’ll do. Serpil Unvar hopes for a solution and wants peace from the man who killed her son Ferhat.

There is still a committee of inquiry in the Hessen state parliament that primarily investigates whether the authorities failed before, during or after the crime. Relatives of the victims have also joined forces in the “Initiative 19th February Hanau”: They demand a complete clarification and consequences from the case.

But they do not trust the police and state institutions to provide this information and work through. This is one of the reasons why the traumatized mothers and fathers, siblings and friends of the victims met in Berlin. They don’t want the regulatory investigation to come to nothing. Because they fear the cover-up by administration and politics after the experiences of the past few years, they got help and commissioned “Forensic Architecture” to investigate further.

The academic research agency, based at Goldsmith University in London, “investigates human rights abuses, including violence committed by states, police forces, the military and businesses.” It was founded by the Israeli architect Eyal Weizman. His team includes artists, scientists and lawyers, architects, software developers, filmmakers and investigative journalists.

Forensic Architecture has researched genocides in Guatemala, drone attacks in Pakistan, the Gaza conflict, the fire in London’s Grenfell skyscraper, Russia’s attack on the Ukrainian Donbass, and the neo-Nazi murders of the NSU in Germany. Their method: Like an interdisciplinary and innovative detective agency, they collect evidence, but put it in contexts that official investigators have not recognized or presumably consciously overlooked.

Witness statements, sound and video data, analogue and digital traces of all kinds are recorded and processed using multimedia. The investigation results are usually made public. The exhibitions are mostly a mixture of elaborate charts that graphically depict the course of events, as well as video films and audio features.

With the overwhelming staging that uses forensic architecture, one mustn’t forget that the group is also controversial because it does not work impartially and cleverly uses aesthetic means to underpin its investigations. On the other hand, it is difficult to see whether these results can also be used in a court.

In the exhibition “Three Doors”, three doors are the focus of Forensic Architecture’s research. The blocked emergency exit of the Arena Bar in Hanau, which prevented the victims from escaping the assassin, and the perpetrator’s own front door, which was insufficiently monitored by the police, so that Tobias R.’s suicide was not prevented.

The exhibition connects the Hanau attack with a case in Dessau seventeen years ago. The third door is that of the police cell where, in 2005, arrested Guinean Oury Jalloh burned to death. His death has not been explained to this day. The prosecutor’s investigation was dropped in 2017. However, there are strong reservations about the statement that Jalloh set himself on fire, confirmed by a fire report, for example.

For Forensic Architecture, the doors of Hanau and Dessau embody “the failure of the social order”. Their investigation revealed that the group of victims in the Hanau bar “had nine seconds to escape”. But because it was common knowledge that the back door had been locked under pressure from the police for years to prevent escape attempts during raids, the emergency exit was not open to them, otherwise they “most likely would have survived”.

In Dessau, there are traces of smoke that make it likely that Oury Jalloh’s cell door was open. The fact that the African did not flee the fire can be taken as an indication that he was prevented from doing so or was unable to do so. The assumptions do not lead to increasing confidence in the authorities involved. However, these are only indications. Evidence in a museum-style show that fuels the hopes of those affected, but also their partly justified resentment against the rule of law.

The problem: the addressee was missing at the opening of the exhibition. Neither German State Minister for Culture Claudia Roth nor Minister of the Interior Nancy Faeser sat on the stage at the publicly financed “federal cultural event”. The latter had only assured on the second anniversary of the assassination that the “obligation of the state” had not yet been fulfilled. At the memorial in honor of the victims in Hanau’s main cemetery, Faeser pointed out that fighting right-wing extremism was her top priority. However, according to Faeser in February, this fight is “not just the task of the police, judiciary and security authorities”.

It is these organs that are now being attacked sharply. Eyal Weizman explained that Forensic Architecture’s research revealed a “history of police over-control of migrant communities and police under-control when it comes to protecting people of immigrant origin”. You can see “how the most vulnerable people in the community who need police protection have been let down by the police.”

Bernd Scherer said: “Despite the cruelty of the crime, the suspicion that the state authorities did not sufficiently uncover the course of events was confirmed. As in other cases of right-wing terror, they did not seem interested in a more detailed investigation of the background and connections.” This would make them “actors in a situation marked by racism and exclusion”.

Mouctar Bah, a friend of Oury Jalloh, said his grief was over and he also “didn’t want to take revenge”. But his assessment that “Germany is a racist state” and its society supports murderous police officers was shockingly explicit.

Against this background, it would be downright dangerous if the investigations of Forensic Architecture were to unfold their suggestive effect only among victims and those who feel like victims. Politicians and authorities could – and should – restore trust if they acknowledge these investigations and use them as an opportunity to review them with an open mind and to revise any incorrect assessments.