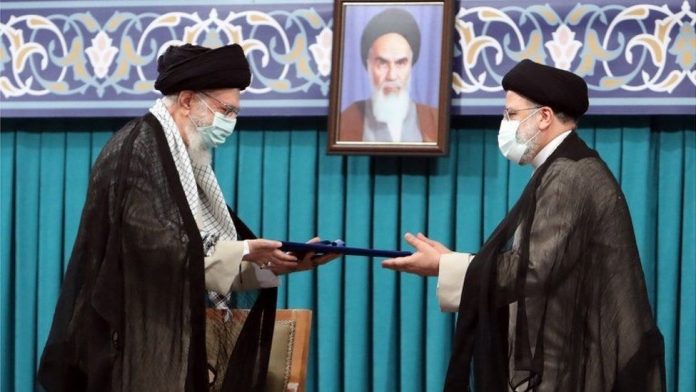 Everyone is now looking to Afghanistan, but in neighboring Iran, the election of the new President Raisi has created an equally explosive situation: for the starving population and also for the regime itself.

According to surveys, the coronavirus in Iran has so far claimed more than two hundred thousand deaths. Due to a lack of vaccines and drugs, this number is now increasing faster than ever. In this situation, new President Raisi has asked parliament to express its confidence in his cabinet. Raisi was brought into office in an election that saw the lowest turnout in the Islamic Republic’s history.

In Iran, more than six hundred people die of Corona every day. And although the country is not embroiled in a murderous war, it can be assumed that this number of victims is far higher than that claimed by the relentless triumph of the Taliban in neighboring Afghanistan. One person in charge speculates that the country will soon have to prepare for an average of eight hundred victims per day.

This death tsunami – as a journalist described the coronavirus situation in Iran – does not cause those responsible to do anything, except to blame each other. The head of the Corona department in Tehran recently stated with unprecedented openness: “When the experts from the World Health Organization came to Iran in connection with the corona pandemic, they were denied the exact number of victims, and instead of thinking about possible solutions together with the WHO, we simply asked them about publicly praising Iran’s health system.” He also revealed: “ We have already turned away foreign aid and representatives from Doctors Without Borders at the airport and refused to involve international advisors. Because of allegedly excessive costs, those responsible have refused their permission to purchase sufficient quantities of vaccine.” There is hardly an intensive care unit in the country with enough beds, and relatives of people with Covid-19 sometimes have to buy the necessary medication on the black market.

The rush to vaccination centers indicate a great shortage of vaccines. To contain the crisis, the health minister had expressly asked for a two-week lockdown. His request went nowhere. A forced restriction of public life would also mean that the many people who depend on going to work every day to earn their bread would have to go hungry.

Husestan, a province in southern Iran overlying an ocean of oil, has recently been the scene of tensions and unrest. In several cities there, thirst and anger over the inefficiency of the political system drove many young people to the streets. Improperly implemented hydraulic engineering projects and dams built without any expert advice have caused an environmental disaster, for which government officials do not take responsibility themselves, but blame it on the drought in the province, general climate change and international sanctions. Power outages in Tehran and many other cities force people to cope with the very hot summer without air conditioning. Since the rulers do not have a solution for any of the crises that are manifesting themselves nationwide, all they have to do is found special commissions to investigate.

With Raisi’s election as president and the associated unification of the government, the religious hardliners are faced with a mountain of problems and crisis-related challenges for the first time. Four decades of permanent injustice in the distribution of wealth and power are now showing their dire consequences: growing poverty in the cities and nonetheless rural exodus. The newly arrived poor, millions of times pushed to the outskirts of the city, are confronted with marginalization and alienation. Unemployment, poverty, inflation rates in the double or even triple digits, discrimination and the inevitably resulting spontaneous mass movements are all facts that are caused by recession, rampant corruption and management failure, i.e. poor governance.

Those people who put their promise to eradicate poverty four decades ago to the control levers of power have since contributed daily to the growing number of the poor in the country, they have maneuvered Iran into economic misery. Demands for freedom and human rights once put forward by the middle class are being superseded by increasing hunger and growing need. Almost all experts agree: The recession is pushing more and more sections of society below the poverty line, and it can only be contained through active, constructive international economic exchange. But the ideological regime stubbornly refuses to acknowledge this.

It looks as if the government not only has nothing more to offer to secure support from the population, but also no answers to the demands and questions that have come into focus, especially through public pressure. Decades ago, on the threshold of the 1979 revolution, ideological Islam had strengthened the role of militant religion and helped revolutionary goals to emerge. Today it is clear that this ideology serves to suppress critics, consolidate the political and economic interests of a tiny minority and cement the status quo. The minority, clinging to their power, considers itself omniscient and determines everything. According to their definition of national interests, not only the US, but the West as a whole, is an incarnation of the devil. There are many indications that the government’s hatred of the West arises from their aversion to related concepts and ideas such as freedom and human rights.

Iran is one of the few countries in the Middle East, in which considerable parts of the population, contrary to what was assumed by the superiors, long for contact and exchange with the West, while they are not at all comfortable with the political turn to China. Therefore, it is highly unlikely that policymakers will be able to turn Iran into a second North Korea. Decades ago, Iranian intellectuals, from the left to the right, feared that turning to Western culture would make Iranians alienated, confused, and disoriented creatures. After decades of hostility towards the West, the young Iranian society in particular presents a different picture today.

They want nothing more than national unification and the development of international relations. Society has changed vastly and profoundly. With the expansion of communication systems, especially through the Internet and the social media, causing sleepless nights for the fundamentalists, the traditional conservatives were deprived of their cultural soil. They are evading answers to the new demands of society, continue to beat the drum against the hostile West and do everything in their power to demonize it. Likewise, for years they have been restricting general access to the Internet and pretending to protect its users against the onslaught of unpopular western culture. The rulers fear that people communicate suddenly and directly with one another.

Iran’s reformers, however, are caught in a tragic, if not tragicomic, dilemma. Those of them who wanted to secure their share of power were all now pushed aside. For years, they had lured citizens to the ballot box out of self-interest, claiming that they had to be voted for in order to prevent the fundamentalists from triumphing and the situation in the country from worsening. In the recent election, however, the public conscience and the collective unconscious have come to understand that choosing between a greater and a lesser evil will only bring about further injustice. In Tehran, a metropolis of fifteen million, only 22 percent of the electorate voted for the new president this time. There were just thirty in the entire country. As a “people’s candidate”, Raisi will therefore not be able to appear vis-à-vis the actual rulers, and therefore do not enforce a new policy.

But that is by no means the only difficulty President Raisi is facing. These days, one of the men is on trial in Stockholm who is charged with the murder of political prisoners in Tehran in 1988. Ebrahim Raisi was then deputy attorney general, and his name appears in the files as one of the four members of the “death committee”. In local political parlance, this term describes the body whose members were commissioned by the leader of the Islamic Republic to examine the files of political prisoners again. The results of these checks culminated in the execution of more than four thousand people. The US and the EU sanctioned Raisi for violating human rights, and some international organizations refer to him as a “criminal against humanity”. Amnesty International calls for President Raisi to be prosecuted.