Iran’s former religious leader Khomeini had called for the formation of special forces to protect his coup and the Islamic revolution from its enemies. Thus, he requested the formation of an “army of twenty million men” to protect the revolution and its political and religious regime. As a response to his request, at the end of 1979, a security organization was formed, with loyal supporters, known as the Basij (The paramilitary Popular Mobilization Forces, or the volunteers).

They are ideological armed Iranian militias, where millions have volunteered and financed directly by the state.

Today, the Basij is classified as one of the most influential entities in public life in Iran. It is a military tool to protect the interests of its political regime internally and externally, especially as it is subordinate to the Revolutionary Guard and participates in the regime’s wars against Iraq and in battles of Syria.

The Basij is a paramilitary force that includes both male and female civilian volunteers and is currently led by Brigadier General Ghulam Husayn Gheeb Bror.

It provides various voluntary services as an auxiliary force belonging to the authorities. They also participate in activities such as internal security, providing social services, and organizing public religious ceremonies.

However, the main task of these forces (currently estimated at about 100,000 members, reports indicate that it could rise to a million when needed) is the repressive, intelligence, and field security activities, as they are spread across various state institutions, schools, universities and factories under the names of the Basij Students, Basij Workers, Basij Women and Basij Clergy.

The Basij repressive powers and ability to move freely are linked to its organizational affiliation with the IRGC, which in turn is subordinate to the authority of the Supreme Leader of the Islamic Republic of Iran in his capacity as the Supreme Commander of the Armed Forces in accordance with the constitution that grants absolute powers to the Supreme Leader. The Basij Forces are known for their loyalty to the Leader of the Islamic Revolution and they are the popular mobilization of the Revolutionary Guards, it had a prominent role during the Iran-Iraq war in the eighties.

According to Radio Free Europe, most of the volunteers in the Basij left their service before the end of the war, and then they were quickly returned to service.

By 1988, the number of Basij checkpoints has decreased, but they still impose the mandatory headscarf and detain women who violate the teachings of Islamic law. They are also arresting young people who mix in public places with members of the opposite sex.

The Iranian government pays fixed salaries to the Basij members from the IRGC’s budget. That is in addition to the other privileges members receive, such as financial rewards, soft loans, and reductions in the prices of religious trips to visit the “holy cities” of the Shiites.

Above all, the Basij is controlling significant economic and financial interests in the country.

The Basij is subject to the principle of dual leadership in terms of decision-making (a common principle exists in many vital institutions in Iran). It receives orders formally from the Commander of the Revolutionary Guard, but its leadership is directly linked to the office of the Supreme Leader, which exclusively has the authority to appoint the Basij commander based on a proposal from the Revolutionary Guard Commander.

In 2008, the Basij forces were merged into the regional structure of the IRGC, so each of them is divided into 31 units, at the rate of one unit for each Iranian province and two units for Tehran.

Then in October 2009, the Basij was formally merged into the IRGC’s ground forces.

As for membership levels, Basij affiliates have three levels, the highest, which is the Special Basij that receives political, military and ideological training in more than fifty thousand bases and offices, distributed among mosques, government administrative departments, factories and educational institutions throughout the country.

In his book “A Captive Society: Basij Militia and the Social Control System in Iran”, Saeed Golkar, a former university professor at Tehran University, estimates them at five million members, However, “65% of state employees are active members of this security organization.” Moreover, one Iranian student out of every three is an active member and trainee in the Basij, this is due to a law in force in Iran that allocates 40% of university seats to its members.

About the genesis and previous backgrounds of the Basij members, the representative of the Iranian Supreme Leader in the Khorasan Razavi Governorate, Ayatollah Ahmad Alam Al-Huda, admitted that many of the Basij’s forces members were previous “Ubash”, a Persian word meaning thugs.

According to Al-Arabiya channel report, Alam al-Huda said that „many young men who became thugs due to poverty and deprivation were later recruited by the Basij forces, they were subject to appropriate cultural courses and gained a good knowledge of Imam Hussein.”

Observers point out that the Basij is used to spread the state’s ideology, so this force is like a propaganda machine in political campaigns that works to highlight the rule of clerics, protect politicians, and enforce Islamic morals and rules.

In the same book, Dr. Saeed Golkar mentions that most of those affiliated with the Basij Forces are “from the poor countryside who found in it a source of privileges that they were denied, and the easiest way to obtain a stable income and be accepted at the university very easily.”

All this makes affiliation an attractive option in light of the difficult economic conditions.

Basij, according to Dr. Said Golkar is a “part of the Islamic Republic, carrying out special tasks that undermine the work of the opposition by suppressing uprisings – even peaceful ones – they also prepare people for wars by training them and teaching them the benefits of martyrdom. Therefore, many of them are willing to sacrifice their lives for the regime.

From another perspective, researchers believe that the Basij Forces are nothing but an upgraded version of the “Rastakhiz” party, established by Shah Reza Pahlevi, from which he wanted to build a strong popular base to protect his regime and infiltrate the joints of society.

In November of 2019, uprisings took place after the government’s sudden decision to increase gasoline prices in many Iranian cities.

Those demonstrations were excessively and brutally suppressed by the security forces, the Revolutionary Guards and the Basij with bloody violence.

Regarding the victims of the crackdown, official reports by the Minister of the Interior acknowledged that 225 demonstrators had been killed, but a special report by Reuters confirmed that the number of victims reached about 1500.

According to the official Islamic Republic of Iran News Agency, Ahmed Alam Al-Hoda warned a few days before the uprisings that “increasing prices and people’s livelihood has caused many problems for the people,” explaining that „many young people who became thugs in the neighborhoods due to poverty and deprivation, they later became part of the local Basij forces, which prevented many riots.”

Tasnim news agency, close to the Iranian Revolutionary Guard, quoted the assistant commander of the Revolutionary Guard’s ground force, Ali Akbar Burjamsidian, a year ago, his comment on the November popular protests: “Our people were able to end the presence of the bad guys within 48 hours. The police have a crucial role in confronting the rioters.”

During the November protests, Ayatollah Lotfollah Dijkam, one of the mullahs’ leaders, threatened the representative of the Iranian leader, Ali Khamenei, in the state of Fares to use the general mobilization forces, Basij, affiliated with the Revolutionary Guards, as he said that they would intervene against the protests in the city Shiraz, if the protests will not stop.

Degkam accused the protesters of being spoilers. “If the state security council does not stop the protests by tomorrow, we will bring Basij forces into the streets.” he added.

The Revolutionary Guards called in a statement at the time, to stop the protests in the country, “Otherwise, violent intervention will take place against the protesters, by using revolutionary methods,” according to the local agency, Tasnim. 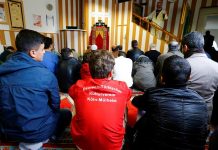 MENA Research and Studies Center - 2022-05-27
The state of Qatar is in the headlines again this year. It is not the global promotion of extremist groups such as the Muslim...