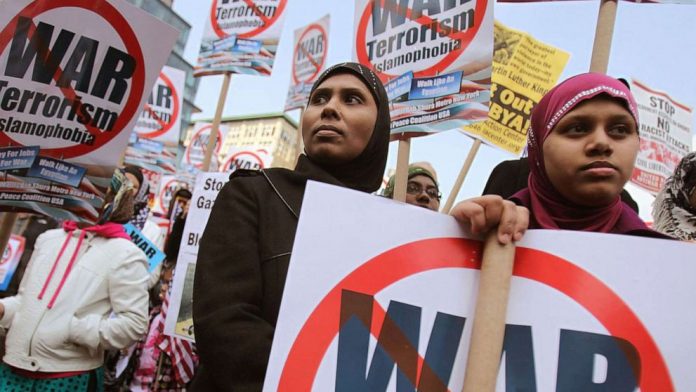 It has appeared again: the “Islamophobia Report” published by Erdogan’s private foundation “SETA”. As always, the Austrian Farid Hafez is one of the editors, a well-known supporter of the Muslim Brotherhood, a dubious scientist from whom even his employer at the University of Salzburg distanced itself after Hafez became part of a police investigation into the radicalization milieu.

French President Macron appears on the cover of the Islamophobia Report, the face of Islamophobia in Europe! This says something about the criteria and the scientific nature of the editors and authors.

It is not entirely clear whether the “Islamophobia Report” is still receiving financial support from the EU Commission. Although the publishers of the pamphlet continue to publicly announce that they are part of official EU funding, research and inquiries in Brussels suggest that the Commission stopped all financial support years ago, particularly at the instigation of the EU Parliament. The Commission also pointed out that in previous years neither the so-called report nor SETA behind the report had been funded; rather, it was a funding for Turkish NGOs that went to the Foreign Ministry in Ankara as part of a civil society project, so the responsibility for funding SETA lies directly with the Erdogan government.

At the same time, the criticism of Islamist tendencies in our societies and the demand for a stronger debate on political Islam are being attacked more and more, this time not by scientists who are on Erdogan’s payroll, but by the “woke” sections of hipsters in the urban centers of Europe.

In the new “Islamophobia Report” too, every statement against a critical examination of Islam, Muslim parallel societies, compulsory headscarves or other excesses of political Islam is an attack on the religion per se; they are classified as “Islamophobia”. Basically, you have to ask yourself what the purpose of defamatory reports like this is actually supposed to be. In view of this inflammatory effect, it cannot be about social peace and cohesion.

This falsely gives the impression that Muslims are discriminated against, disadvantaged or even persecuted throughout Europe, and that in some cases with state support and approval. This widespread narrative then logically shakes the confidence of many Muslims in the rule of law and thus creates the feeling of belonging to a persecuted minority. There is hardly anything better suited to radicalization among Muslims than perceived injustice, even if it is only imagined.

The report also mentions incidents that have no Islamophobic background at all: A Muslim youth is attacked by two men on the way home – more is not mentioned. No Islamophobic slogan or similar indicates that the attack against a Muslim was the motive, so one cannot speak of an Islamophobic motive. There can be innumerable motives for such acts of violence, and as long as nothing explicitly points to an anti-Muslim motive, it is maliciously misleading to classify common everyday crime under the category “Islamophobic attacks”. According to this logic, every act of violence by a Muslim migrant against a German Christian could be assessed as “anti-Christianity” in a general and imprecise manner. If one were to apply this standard to acts of violence by Muslims, we would have astronomical figures.

The unscientific standards of the editors once again leave no room for legitimate criticism of Islam. Any criticism of parallel societies, mass migration, crime by foreigners, Islamism and even jihadism is used as evidence of the allegedly rampant Islamophobia. Critics, many of whom are devout Muslims, are to be quite simply stigmatized and silenced, so that the Muslim communities can no longer “be infiltrated with their heretical theses”.

The question of the scientific nature, i.e. doubt and questioning of a thesis, in which form one can or may express criticism of Islam at all, remains open. The real goal seems to be to silence all criticism and thus continue to advance Islamization without resistance. If the authors’ definition of the terms “Islamophobia”, “Muslim hostility” and “anti-Muslim racism” prevail, it would criminalize and thus paralyze any critical analysis against Islamism.

The latest attacks from the “hipster camp” look different. The best-known example is the case of Klaus Kinzler at the University of Science Po in Grenoble. It now went up to France’s state politicians. “Cancel culture in science” is the keyword.

What’s behind it? A German-born scientist, who moved to France decades ago, teaches at Science Po in Grenoble. Last year he got into a fight with another professor and students over an event that was supposed to take place during an action week on “equality and the fight against discrimination”. The title: “Racism, Anti-Semitism and Islamophobia”.

Kinzler opposed the inclusion of “Islamophobia” in the program, arguing that Islamophobia is not on the same level as anti-Semitism and racism. A short time later, other scientists made the dispute public, while “woke” student groups took a stance against the professor and a colleague who supported him, on social media he was accused of spreading hatred against Muslims.

The students who protested against the scientist came from the milieu of “islamogauchisme”, i.e. people who have taken wokism to a point where it is absolutely forbidden to say anything critical about the religion of Islam.

So now the conservative religious fighters, who reject the values of Europe and have a definition of science that was already incapable of winning a majority in the Middle Ages, shake hands with hip prosperity kids.