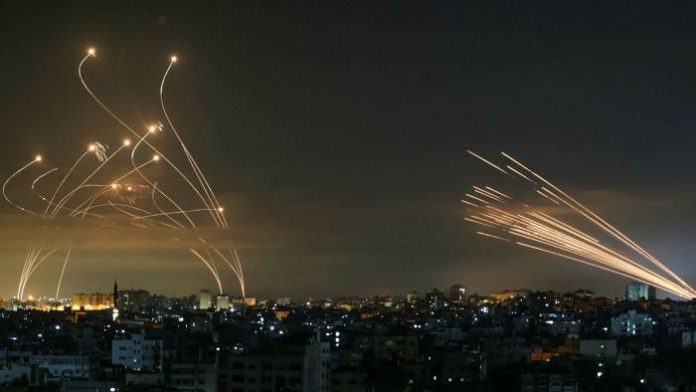 Many things come together in the unrest in Israel. These include attempts by radical settlers to take over houses around the old town.

A place long forgotten by world politics is appearing these days in the form of a small, shabby side street on the slips of Western foreign ministries. It is located in East Jerusalem, only a few hundred meters from the old city wall, within sight of the residences and consulates of European countries. The retired electrician Aref Hammad, which, like so many in the Palestinian neighborhood, is under an eviction order. Hammad has lived in the one-story house since 1956, eighty square meters. Now he is supposed to get out because an organization of radical Jewish settlers has successfully sued for “return”.

Directly across from Hammad’s garden, the settlers have already taken over a house. Police teams armed with assault rifles are standing left and right in front of the barred entrance. On the roof, the settlers have attached a shining blue Star of David and letters from a saying that means “Bring our boys back to our borders”.

A US-based organization ensured that the Palestinian family had to leave their home there, and they are also suing Aref Hammad’s building in Israeli courts. Because in 1876, two Jewish foundations are said to have bought land there, as an Israeli court ruled. On it is the tomb of Shimon the Righteous, a priest of antiquity. After Jordan conquered East Jerusalem in 1948, it had apartments built there in the Sheikh Jarrah neighborhood for Palestinian refugees who had fled or been expelled from the area of ​​the new State of Israel.

Hammad’s family, for example, comes from Haifa, his neighbor from Jaffa. In return for the construction of the houses, the families gave their refugee status and the corresponding ration cards back to the Palestine Aid Organization UNRWA. In the Six Day War 1967, Israel conquered East Jerusalem. And the settlers have been coming to Sheikh Jarrah for about fifteen years, reports Hammad. “First they went around and offered us money, but we refused.” Then the organization complained and was right.

Around 3,000 settlers now live between 100,000 Palestinians in the so-called basin immediately around the old town, in which the Temple Mount and the Al-Aqsa Plateau are located. In the district of Sheikh Jarrah to the north of the old town and in Silwan to the south of it there are frequent evictions. Along with the Al-Aqsa Mosque and the Damascus Gate in the Old City, Sheikh Jarrah has become one of the culminating points of the unrest that is shaking Jerusalem as it has not for years.

It started three weeks ago with a clash at the symbolic Damascus Gate. Unlike in previous years, the police had cordoned it off and thus prevented the traditional gatherings there after the fasting. Just months earlier, the city administration had changed the name from “Damascustor Square” (Bab al-Amud) to “Hadar Vahadas Steps” in honor of two murdered policewomen. At the same time, videos on social media showed attacks by Palestinians on innocent Jews. Israel then restricted the number of people praying in the Al-Aqsa mosque, while right-wing Jewish groups marched with the support of a Knesset representative and shouted slogans wishing the Arabs dead.

Hamas did not miss the opportunity of the unrest and fired rockets into Israeli territory. Then the Palestinian President Mahmud Abbas canceled the planned parliamentary elections, which provided relief in America and Israel because there were fears that Hamas could achieve growth. Abbas justified the rejection by saying that Israel would not allow the Palestinians in East Jerusalem to vote. This only further reinforced the feeling of many East Jerusalemites that they did not have a leadership that would take their concerns seriously. Days later, two Jewish settlers were injured and one killed in a gun attack from a moving car in the West Bank. Shortly afterwards, the Israeli army killed a 16-year-old Palestinian in a demonstration against the occupation.

After continued rocket attacks by militant Palestinians, Israel’s army intensified its attacks on the Gaza Strip. “Air and ground forces are currently attacking in the Gaza Strip,” said the Israeli army on Twitter. Israeli television reported massive attacks by the air force, artillery and armored forces on the coastal strip.

Israeli Prime Minister Benjamin Netanyahu: “I said that Hamas would pay a very high price.” The attacks will “continue with great intensity,” he said in a video message. “The last word has not yet been spoken and this operation will continue as long as necessary.”

Israeli TV reported it was the most violent and broadest attack in the Gaza Strip since the escalation began on Monday. The army called on Israelis in the border towns, who live up to four kilometers away from the Gaza Strip, to go to shelters until further notice.

No Israeli ground troops in Gaza

On Thursday evening it was announced at short notice that Israeli ground troops had penetrated into the Gaza Strip. The army later announced that there were “no soldiers” in the Gaza Strip. Corresponding previous information was due to an internal communication problem, explained an army spokesman for this “clarification”. Previously, after days of rocket fire, Israel had moved additional troops from the Palestinian Territory to the border.

Defense Minister Benny Gantz had previously approved the mobilization of a further 9,000 reservists in view of the escalation. Two days ago the army had mobilized 5,000 reservists. According to media reports, the army was preparing for a possible ground offensive.

Palestinian terrorists continued their violent rocket attacks on Israeli population centers on Thursday. Numerous cities were shelled again in the evening, including Ashkelon, Ashdod and Modiin. Missiles were also fired in the direction of Tel Aviv International Airport. In a village in the south of the country, an 87-year-old was fatally injured while trying to escape to a shelter, according to rescue workers.

The Israeli military also continued its massive attacks on Thursday. According to the Ministry of Health, 103 people have died in the Gaza Strip since the escalation of violence. According to official figures, eight people have been killed in rocket attacks in Israel so far. The Islamist Hamas ruling in the Gaza Strip is classified as a terrorist organization by Israel and the EU.

A spokesman for the Hamas military arm said an Israeli ground offensive would be “an opportunity to bring into our possession more dead soldiers and prisoners of the enemy.” One is ready to “teach the enemy a hard lesson with God’s help”. More than 2,100 Palestinians and more than 70 Israelis were killed in the 50-day Gaza War in 2014, according to both sides. According to the UN emergency aid organization Ocha, 18,000 houses in the Gaza Strip were destroyed or damaged.

According to the army, around 1,750 rockets have been fired at Israel since Monday evening. According to Israel’s Prime Minister Netanyahu, almost 1,000 targets have been shot at by the militant Palestinians so far.

Anti-Israeli and anti-Semitic demonstrations in Europe

There were several anti-Semitic and anti-Israeli demonstrations in Germany. In Gelsenkirchen, the police stopped a demonstration that was moving towards the synagogue on Wednesday evening. In a video broadcast by the Central Council of Jews on Twitter, chants with anti-Semitic content can be heard. The police confirmed the authenticity of the video on Thursday. In Hanover, too, the police had to intervene in an anti-Israel demonstration. Israeli flags were also lit in several cities. Maas called for the demos to be banned “if criminal offenses are expected”.

German President Frank-Walter Steinmeier condemned the events. “Nothing justifies the threat to Jews in Germany or attacks on synagogues in German cities,” he said in an article published on Thursday.

The UN Security Council is due to deal with the escalating Middle East conflict on Sunday. Diplomats at the United Nations in New York announced on Thursday that the virtual session was scheduled for Sunday at 4 p.m. CEST at the request of China, Norway and Tunisia. The US, which had previously canceled a Security Council meeting planned for Friday, also agreed.

It is the third meeting of the UN body to escalate violence between Israelis and Palestinians within a week. There had been no agreement on a joint statement at the two previous meetings. According to participants, this was due to the US, which refused to condemn its ally Israel.

After the first two Middle East security meetings this week, ten council members, including Tunisia, Norway and China, requested a public meeting for Friday. According to information from diplomatic circles, representatives of Israel and the Palestinians should also take part. However, the application failed due to resistance from the United States. US Secretary of State Antony Blinken spoke out in favor of a meeting early next week to give diplomacy some time.

The US government advises against traveling to the Gaza Strip, which is ruled by the radical Islamic Hamas, because of “Covid-19, terrorism, civil unrest and armed conflict”. The travel warning for the West Bank, on the other hand, is only justified with restrictions in connection with the corona pandemic.