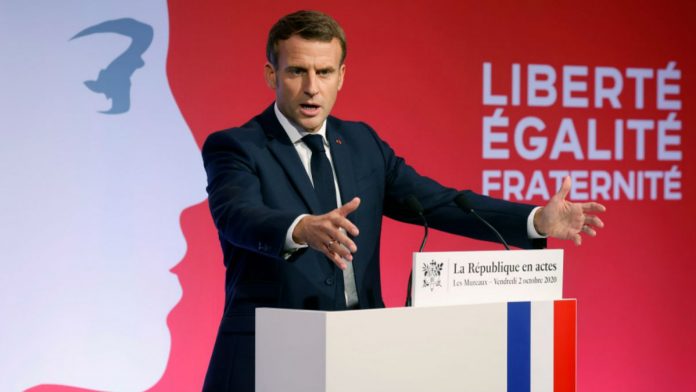 Emmanuel Macron has announced a law against religious “separatism” aimed at freeing Islam in France from “foreign influences”.

In a long-awaited declaration, the French president outlined new measures to “defend the republic and its values and ensure it respects its promises of equality and emancipation”.

The measures to combat “radical Islamism” and terrorism suggested a carrot-and-stick approach: local officials will be given extra legal powers to combat extremism while money will be invested in education – particularly of Islamic culture and civilisation – and to deal with other social problems including housing and poverty.

“Our challenge is to fight against those who go off the rails in the name of religion … while protecting those who believe in Islam and are full citizens of the republic,” Macron said.

His speech on Friday was a broad outline of the measures to come, which he said would be drawn up in the next two weeks for a law to be presented in December.

The measures include placing mosques under greater control and requiring that imams are trained and certified in France. The aim would be to “liberate French Islam from foreign influences”, he said, particularly funding. Islamic organisations that receive funding from the French state will have to sign a “secular charter”.

Associations found to be pushing ideas contrary to republican ideals could be ordered to disband, and €10m (just over £9m) of public funds would be used to finance higher education studies and research into Islamic culture and civilisation.

“The country has been hit by Islamic terrorism since 2012 and we have progressively rearmed against this threat,” he said.

Radical Islamism had shown a “willingness to contravene the laws of the republic, to promote other values … to organise another society”.

However, he recognised that France’s colonial past had helped to create the problems the country faced.

“We have created our own separatism in some of our areas. We have concentrated populations of the same origins, the same religion.” This had created “economic and educational difficulties”.

Macron announced extra funding for the country’s education and justice ministries to “assure a republican presence in every road, every building”.

He said education was key to the measures and that from September next year children would be required to attend school from the age of three. Home schooling is to be limited.

Macron would be drawing up new measures in the coming weeks to address other social problems including housing, because a “profound change” was needed, he said. “We cannot keep adding poverty to poverty.”