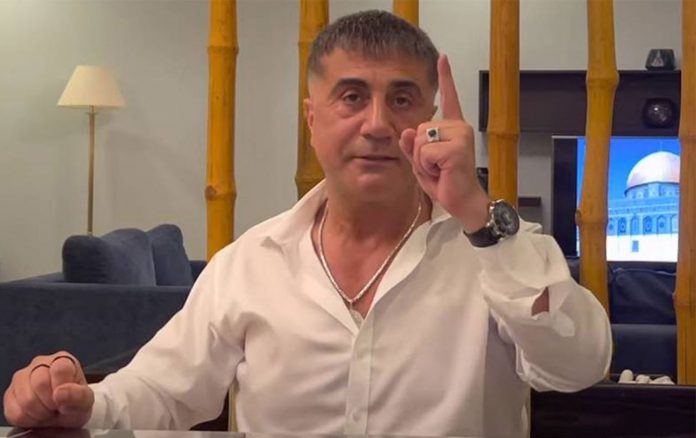 The man in the crisp white shirt, macho-like at least two buttons too deep, is Turkey’s best-known mafioso. Sedat Peker should rather employ prosecutors and judges. Instead, he brings President Recep Tayyip Erdoğan into political calamities: as a YouTube star and alleged whistleblower.

The affair: A criminal who fled the country in 2019 has been washing the dirtiest state laundry on YouTube for a good month. The man with the somewhat outdated Prince Ironheart hairstyle greets the President confidentially, almost amicably, in front of an audience of millions: “We’ll speak at eye level, big brother,” says Peker to Erdoğan and adds: “I’m not a foreign agent.” That means: I am one who was there. Who knows everyone. Who knows everything.

In his weekly one-hour shows, the 49-year-old accuses Turkey’s political elite of drug trafficking, billions in oil and arms smuggling from and to the civil war country of Syria, supporting jihadist rebels and al-Qaida fighters. He speaks of rape, murder and assassinations in Turkey. Without providing any verifiable evidence so far, he gives the impression that the Turkish state is nothing more than an arm of Don Corleone Inc., the mafia.

Evidence is also missing after episode eight of the Peker series. But if the survey institute Avrasya Araştırma is to be believed, 75 percent of Turks already believe the unbelievable confessions and revelations. Which must cause concern for Erdoğan, who is already politically ailing.

In part 9, he wants to talk about the head of state

The only one that Peker does not accuse is the “big brother”, the president. But episode nine of the series, which should actually be called “Peker unpacks”, has been announced: The Mafia man wants to talk about the head of state, “from man to man, like the older with the younger brother”. The sign that stands in front of the YouTube camera right next to Peker shows that this should be understood as a threat. A book is leaning against the previously blank blackboard. The title: “Family”. Everyone in this country understands what family means in Turkish politics. The family is the closest circle of power.

Erdoğan is not only addressed by the mobster as “highly esteemed President”. He is trustingly called “Abi”, “big brother”. That is the Turkish form of respectful closeness. However, an ordinary mortal, let alone a mafioso, is hardly entitled to this in relation to the head of state. Peker, whose sudden YouTube fame is noticeably rising to his head, apparently sees himself on the same level as Erdoğan.

Back to the beginning, we’re only at episode eight. One of Peker’s ears grinning as “Sülü”, as little Süleyman, is none other than Interior Minister Süleyman Soylu, a dreaded law-and-order man. In front of an Internet audience of 70 million viewers, Soylu has to attest to a “nut-sized brain that you want to become president with” from Peker: Soylu is Peker’s favorite enemy. The accusations against him have the features of a vendetta, a personal reckoning. He launched Soylu’s political career 30 years ago, says Peker. He “invested” in Soylu. But the one who had risen to become a minister betrayed him at the crucial moment. That sounds like revenge: Soylu’s career is currently experiencing a storm that he can hardly survive without damage.

With the “pelicans” greeted with a smile, Peker addresses an influential faction in the AKP, the ruling party. The head of the pelicans is Erdoğan’s son-in-law; Berat Albayrak, like Soylu, he was for a while a possible heir to the throne in the presidential palace. Plus the white board and the book “Family” – there is obviously still room for improvement at Peker.

It almost looks as if the Mafia boss is planning to become the demolition expert at the monument to the Erdoğan presidency. And the man who has ruled Turkey for almost two decades seems – at least for now – to have to watch helplessly as a mobster trying to shake his political system.

A moderately talented self-promoter with a fairly long criminal record as a self-proclaimed whistleblower? An attempted coup at the Netflix series pace, on Youtube? This is an unprecedented political provocation – and a real threat to Erdoğan, who has been in power since 2003.

Erdoğan has a number of opponents, such as the Emirates

What could he do? The warrant that was written out is of little value as long as no one knows where Peker is hiding. And the way in which he conducts his frontal attack raises obvious questions. Could it be that foreign services are coaching Peker? He went into hiding in 2019, allegedly lives in the United Arab Emirates, and the UAE sheikhs are Erdoğan’s greatest enemies. All of this is speculation. Erdoğan’s circle, however, is already claiming exactly this: “With his nonsense, Peker proves that he is in the service of Turkey’s enemies and that he is also serving an alliance of evil in our own country,” said Presidential Advisor Oktay Saral.

Bullshit or not: Erdoğan also has bills open with the US, thanks to its rapprochement with Moscow. Israel and Egypt are also among those who Erdoğan has little interest in: He supports Hamas and protects the Muslim Brotherhood. Especially in Turkey, there should be enough people in the security structures who would rather see Erdoğan fall today than tomorrow. If only some of the allegations are true, Peker can hardly know all of these details: someone is likely to be feeding the whistleblower with information.