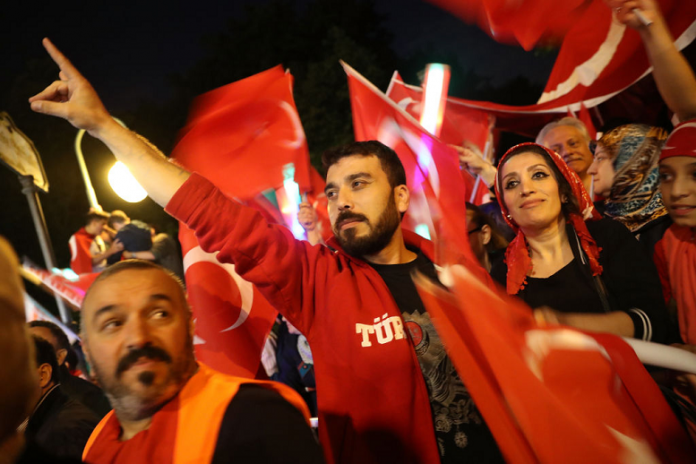 Politicians and journalists of Kurdish origin living in Europe in particular are increasingly receiving death threats over the Internet, sometimes even by telephone or post. These threats often come from Turkey.

One of the most recent examples took place recently in the western German city of Essen. A young Kurd is threatened in the car on his way home from work. He comes to a stop in front of a traffic light, a white sports car pulls up next to him. The man behind the wheel looks straight at him. The man lowers the window and asks if he can help. The person opposite calls him a son of a bitch and says: “I recognized you.” The traffic light turns green, the attacked person drives off, the sports car follows. The stranger keeps trying to push him away, to force him to stop.

The young man does not know who this person was or what he wanted. At this point, he also doesn’t know who keeps sending him death threats on Instagram: pictures of pistols, machine guns and corpses.

The victim is a German-Kurdish activist and politician in Essen, North-Rhine Westfalia. He has been a member of the Integration Council since September 2020 and would like to run for the city council in the next local elections. He is not the only victim of that threatening account on Instagram.

Who exactly is behind these and many other threats? A single perpetrator or a network of so-called trolls who organize themselves online and systematically threaten people whose world view does not correspond to their own? If you look for answers, you come across conflicts that go far back into Turkish history and are constantly reviving. And you encounter structures that the authorities in Europe very often do not seem to be able to cope with.

It is mid-June 2021 when the Kurdish-German politician receives the first threat on Instagram. A picture of two guns, commented in Turkish with “Come on, I’m waiting for you” and a video with the graffito “Long live the idealist associations”. The ultra-nationalist Turkish movement, the so-called Gray Wolves, calls itself “idealists”. Their supporters are targeting supposed enemies of the state, including supporters of the Kurdish movement.

The second threat follows, again on Instagram. This time it’s four photos from another account. Including one of a handgun, one of a Turkish passport and two of women’s bodies lying in a pool of blood on a tiled floor.

The sender’s account keeps disappearing and then reappears with a slightly different name.

Words that appear repeatedly in account names are “Jitem” and “Kod Adım Yeşil”. “Jitem” is the name of an informal paramilitary underground organization credited with a series of political assassinations in the 1990s, when the Turkish-Kurdish conflict was at its peak.

“Kod Adım Yeşil” means “My code name is green”. “Green” was the alias of the agent Mahmut Yıldırım, around which many myths revolve in Turkey. The profile picture of this account shows a picture of Yıldırım. He is held responsible for several murders – also in the 1990s – which he allegedly commissioned He was also reportedly tasked with killing Abdullah Öcalan, the head of the banned Kurdish Workers’ Party PKK.

The local politician knows the myths about Yıldırım aka Yeşil. Behind the threatening news he suspects a Turkish nationalist in Germany who takes offense at his political activities, perhaps even someone from his immediate environment. Because his name is not a well-known one, his name is not Cem Özdemir, who, as a well-known federal politician of the Greens, has been repeatedly attacked by Turkish nationalists and extremists for many years.

The young politician from Essen went to the police shortly after receiving the threatening news and filed a complaint against an unknown person. But after four months, the public prosecutor’s office discontinued the proceedings. “Further investigations do not promise success at the moment,” the letter says. Rather, the German state security agency told the victim that it was assumed that there was a network outside the EU and that the Turkish state would not cooperate anyway.

It is often said in Germany that people are importing the conflict from Turkey and Kurdistan into the country.

Rather, the latest studies assume that in the context of globalization and migration, the Turks who are already living in Europe in the second and third generation are being re-ethnicized and re-nationalized in a targeted manner, especially with the help of supporters of the Gray Wolves, about which a ban debate in November 2020 was already taking place Bundestag flared up.

The ideology of this ultra-nationalist and racist movement dates back to the First World War. At the center of the Gray Wolves was once a supposed unity of all “Turkic peoples”. Their goal: the unification of these “peoples” to form a Turkish empire.

A series of acts of violence and murder followed, especially against communists and Kurds, who, along with Jews, Christians and Armenians, are considered the greatest enemy.

The anti-Kurdish mood in Turkey, which has been exacerbated by the coalition between Erdoğan’s AKP and the far-right MHP, is also having an impact on the migrant communities in Germany. Ethnic niches are emerging there, in which young people in particular are offered identity.

Social media have great potential for mobilization. In Germany, people keep making the mistake of concentrating on “one right-wing extremism” and neglecting the migrant one.

The perpetrators do not live in Europe

In one case, the cybercrime department of the Federal Criminal Police Office (BKA) supported the police in the investigation. A check of the IP address of a sender of the threatening messages reveals that the messages were sent from the central Anatolian city of Kayseri. Now we at least know that possible perpetrators are probably staying permanently in Turkey – and not in Germany.

However, in recent years there have been repeated discussions about Turkish secret service activities in Germany, which also involved the passing on of personal information. A response from the federal government to a small inquiry by left-wing politician Sevim Dağdelen on December 28, 2021 revealed that the Federal Public Prosecutor initiated six proceedings in 2021 on suspicion of secret service activities by Turkish intelligence services. In 2020 there were four. No charges have been filed in any of the cases.