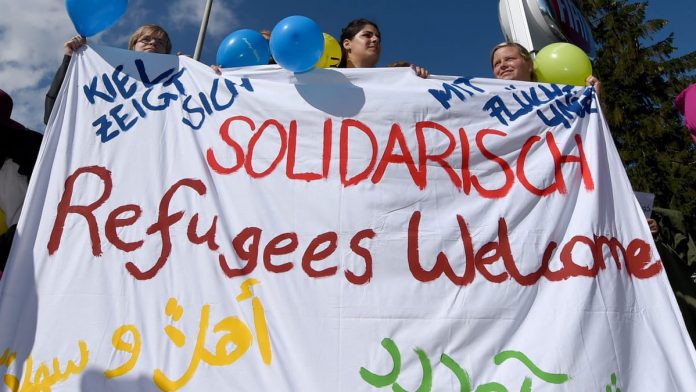 Shortly before the previous general election in Germany last year, science felt compelled to issue a warning: Germany needs immigration, researchers at the Kiel Institute for the World Economy (IfW) wrote. Without immigration, the population would have shrunk since the 1970s, they explain. The influx of people willing to work who paid into the social security systems is a great opportunity. “However, some of the election programs are so focused on preventing migration that it seems as if the parties are not even aware of this opportunity.”

The IfW result: At least 75 percent of all parties dealt with asylum in the sections of their program that are devoted to migration. On the other hand, other proposals, which economists consider much more important, took up little space – for example for the urgently needed immigration of people who want to work or study here.

The accusation is justified and yet explainable: it is true that fewer and fewer refugees have come recently? In the Corona year 2020, Germany recorded the lowest growth since 2011. But it was only six years ago that 20,000 refugees stranded in Munich on a single weekend, as many as not since the immediate post-war period, and all over the country turned the gyms into shelters. The images from that time still determine party programs. It is about the questions of who will be allowed to come in the future and what will become of rejected refugees. Only then does it come up: who do we need?

Former German Chancellor Angela Merkel has never questioned her 2015 decision to allow the people stranded in Hungary to enter the country. However, it has recognized that the initially uncontrolled and unregistered influx of migrants has in some cases overwhelmed the country.

Merkel’s Conservative Party CDU is still fighting for it. This can be heard from every line of the party program. It cites the Biontech founders, both of whom come from Turkish immigrant families, as an example that Germany can benefit from the “brightest minds from all over the world” through “targeted” immigration. But it devotes far more lines to the question of how one can curb the influx of asylum seekers. Like the right-wing AfD party, the CDU wants to define other so-called safe countries of origin. These are countries that the legislature assumes that no one will be persecuted there because of their political attitudes, currently the Balkan states, for example. In the future, Algeria, Morocco and Tunisia could also be on the list. Asylum is usually not granted to people from these countries. In addition, through development aid, the CDU wants to put pressure on the countries of origin to combat the causes of flight in order to prevent migration towards Europe.

The other parties also want to fight the causes of migration, but not refugees, as the SPD and the Left party say. The focus of the SPD, FDP, Left and Greens is less on isolation. “It must be possible to get to Europe safely,” writes the FDP, which wants to ensure that refugees can also submit their asylum applications to embassies abroad. The four parties campaigned for a state-organized sea rescue. Not to stand idly by while people drown in the Mediterranean Sea is also a concern of the local Bavarian CDU sister CSU and its Federal Interior Minister Horst Seehofer. Since 2018, Germany has voluntarily taken over around 1,000 boat refugees from Malta and Italy. But that does not appear in the CDU/CSU program. The SPD, the Left and the Greens also support the alliance of 200 municipalities that, against the will of the Interior Minister, want to take in additional refugees on their own.

The most beautiful plans to “organize and control” immigration will remain ineffective if Germany fails to coordinate with the other EU states. Asylum policy is often European policy, an unjust European policy. The greatest burden is borne by countries such as Greece and Italy, where most of the refugees arrive. Germany rested for a long time. Since the refugee crisis, the federal government has been fighting for a fairer distribution, but has failed due to the veto of states like Hungary that do not want to accept refugees. Without a solution, Germany has a problem, perhaps the biggest problem in asylum policy at the moment. Recognized refugees receive so little support there that they move on on their own. An estimated 27,500 have already come to Germany and applied for asylum again. Actually, they are not allowed to. But German courts forbade sending people back to a Greek misery.

But how to deal with the refugees already living in Germany, including many who came in 2015, were rejected and yet were not deported. Around 30,000 would have to return to Afghanistan alone.

Here, too, the CDU strikes much sharper tones and has more overlaps with the AfD than with the former coalition partner SPD, now the new Chancellor’s party. It wants to deport faster and enable deportation detention at the airports. Incorrect information in the asylum procedure should be punishable by law. The AfD wants to terminate the Geneva Refugee Convention and only accept a handpicked contingent of culturally appropriate refugees. It wants to set up German-run prisons abroad for foreign offenders.

The SPD, the Greens and the Left, on the other hand, focus on the plight of rejected asylum seekers. Many of them have been in the country for years. They could not be deported in the corona pandemic, for example, but were still not allowed to arrive. “We want to enable well-integrated people without a secure residence to have a permanent right to stay,” writes the SPD. FDP and also Greens want to recognize efficiency. Anyone who came as an asylum seeker and found work or training should be allowed to stay. Quite different is the Union, which rejects this type of lane change from asylum to labor migration. It could attract even more asylum seekers, fear the conservatives. The SPD and the Greens are also calling for children to go to daycare and school from day one – at the moment, refugee children are often not attending school in the first six months.

Isolating yourself or providing humanitarian aid – many of the parties’ proposals revolve around these two poles. However, migration can also be controlled through positive incentives. If there were more legal ways for people willing to work to come to Europe, they would less embark on the dangerous escape and then fight for asylum as often hopeless petitioners for years.

The Western Balkans regulation is a shining example. Even before the great wave of refugees, more and more people came from the Balkan states and applied for asylum without a chance. The German government made this possibility more difficult, but at the same time opened the country to all those immigrants who can present a job offer in Germany – be it as a skilled worker or unskilled laborer. Bosnia-Herzegovina and Kosovo are now among the countries to which, besides India, work visas were most frequently issued. Asylum seekers hardly come.

The economy is looking for these people. Germany needs 400,000 immigrants a year. In the future, the CDU also wants to make greater efforts to attract skilled workers willing to immigrate, “for example in the IT sector”, and to use the German embassies abroad for this purpose. The SPD, which had campaigned for the extension of the Western Balkans rule in the last legislative period, does not take up the issue. The Left is explicitly against the recruitment of skilled workers, they want to remedy the shortage with decent “training, working conditions and pay”. Only the FDP and the Greens are making more comprehensive proposals for the immigration of skilled workers, both of whom rely on a points-based system, as is also used in Canada. Points are awarded there for the level of training, language, but also for the subject areas that are particularly sought-after. Applicants can easily see if they have a chance. And whether Germany sees them as what they could be for the country: an opportunity.

The new government in Germany, a coalition of SPD, Greens and FDP, did not present a new program yet, as the current geopolitical and climate situation might result in new refugee movements in Europe.