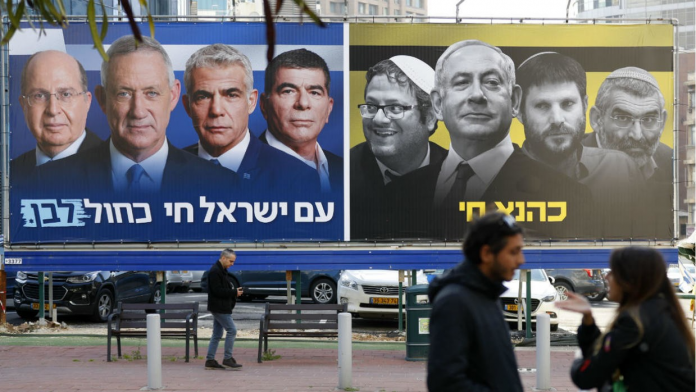 Last week, the Israelis were called to vote again, fulfilling their democratic duty for the fourth time in two years. The turnout fell only slightly from 71.4 to 67.3 percent, so that despite the multiple polls, there is no question of election fatigue. Attention is now shifting from the 6.5 million eligible voters to the 120 newly elected members of the Knesset, who will determine the composition of the next government and the election of the prime minister.

The elections had become necessary after the government of the national emergency formed in May 2020, consisting of Netanyahu’s Likud, the religious parties and parts of the electoral alliance Blue-White, failed in December to pass a double budget for the years 2020 and 2021 and that Parliament was then dissolved. This was, of course, only the advanced reason. Netanyahu worked single-mindedly towards the failure of this coalition in order to prevent the rotation in the office of prime minister planned for November and thus his own loss of power.

According to the preliminary final result, despite the fact that his Likud became by far the strongest party, the incumbent prime minister may have difficulty gathering enough MPs to stay in power. Netanyahu’s right-hand bloc currently has 52 seats, nine seats too few for a government majority.

As already indicated before the election, the Arab Raam party, which is the smallest party with just four seats in parliament, could become the kingmaker. This would be tantamount to breaking a taboo, given the unwritten law that no Israeli government could rely on the votes of the non-Zionist parties of the Arab minority.

The fact that Netanyahu, the protagonist of what is arguably the most sustained shift to the right in Israeli history, who not only fights the second state solution, but also insulted the Arab Israelis as the fifth column of the enemy, is now breaking this taboo, shows on the one hand a certain normalization in the Jewish-Arab world Internal relationship. But it is even more evidence of the breathtaking, ideological agility of this exceptional politician who became Israel’s longest-serving Prime Minister for a reason.

Netanyahu worked single-mindedly towards the failure of this coalition in order to prevent the rotation in the office of prime minister planned for November this year and thus his own loss of power.

For the time being, however, the Islamic party has not yet stated whether it actually supports the prime minister. She too is under enormous pressure. From the point of view of their constituents, however, the leap to the meatpots of power could be more attractive than a daring ideological balancing act. It would also mean a major integration of the in many respects marginalized minority and would mean that the interests of the Arab and Palestinian Israelis will receive far more attention in the future.

The declared opponents of Netanyahu have meanwhile won 57 seats, and although they too could achieve the necessary majority with the support of the Islamic party, it is questionable whether such cooperation is possible. The ideological range of such a coalition would be enormous. In fact, there is only one common denominator: the replacement of Netanyahu.

If none of the blocs manage to organize a majority by the end of May, the country could face its fifth election since 2019. The proportional list voting system with its low threshold of only 3.25 percent makes it almost impossible for a single party to win an election directly. According to the Central Election Commission, the Prime Minister’s right-wing Likud party received 24.2 percent of the vote. The centrist Yesh Atid party of the main opposition leader Yair Lapid took second place with just 13.9 percent. Accordingly, the Likud receives 30 seats in the Knesset with 120 seats and Yesh Atid 17. In addition to the two “big” parties, eleven other forces are entering the Knesset, all of whom have between 3.8 and 7.2 percent of the votes.

The fragmentation of the traditionally fragmented political landscape has thus reached a new high point. If Yair Lapid, as the leader of the list for the second largest party, rallies a majority behind him, someone could become prime minister who was not even elected by a seventh of the electorate. The repeated stalemate shows once again how deeply divided Israeli politics is. Hardly any party succeeds in integrating larger groups of the population and voters in the sense of a people’s party.

The fragmentation of the traditionally fragmented political landscape has thus reached a new high point. However, this fragmentation cannot hide a general shift to the right. The left-wing Zionist forces that have been dominant for a long time now only achieve ten percent – which, in view of the polls a few weeks ago, is even considered a respectable result. Even more than ideologically, the party landscape is broken down based on the question of pro and anti-Netanyahu. The longtime prime minister is the dominant figure.

Not only Netanyahu but also his rivals vie for the support of both the right-wing nationalist Yamina and the Islamic Raam, which is needed to achieve a majority. Raam party leader Mansour Abbas said he was open to working with Netanyahu if it would more fairly serve the needs of Israel’s Arab citizens, who make up around 20 percent of the population. Even after the election, Abbas announced that he was ready to work with Netanyahu, but also with the other side.

Bezalel Smotrich, an ally of Netanyahu and chairman of the religious Zionism party, an alliance of all kinds of right-wing to very right-wing forces founded before the election, immediately replied that the incumbent Prime Minister could only rely on his support if he ruled out cooperation with Raam. In his group there are representatives who follow a Greater Israel ideology, who demand the expulsion of the Palestinians in the West Bank to Jordan and who want to discriminate against LGBTI people.

Yamina, also on the right, is led by Netanyahu’s former protégé and former defense minister, Naftali Bennett, with whom he has a difficult relationship. Like Abbas, Bennett has not yet announced which candidate he will recommend President Reuven Rivlin to form a government. In Israel, the President has the role of officially commissioning the most promising candidate to form a coalition.

A centrist or center-left government might try to revive deadlocked negotiations with the Palestinians and consider territorial concessions in return for peace. However, even an anti-Netanyahu coalition would ultimately have to rely on votes from right-wing parties, and would give a possible Prime Minister Yair Lapid little leeway.

The political blockade is exacerbated by the unprecedented situation of a prime minister who insists on staying in office despite charges of corruption and abuse of office. The trial is slated to resume in two weeks. Netanyahu denies any wrongdoing. His allies meanwhile speak of radical measures, including retroactive immunity regimes and severe restrictions on the powers of the Supreme Court.

The last four elections have shown one thing above all: Most of the predictions about possible government coalitions have been belied because of the complexity of Israeli politics and the inventiveness of individual actors. Netanyahu in particular stands out here, so it seems by no means unlikely that he will continue to hold power.

It would be desirable for the people of Israel if there were not an immediate fifth ballot. With a poverty rate of over 20 percent and a current pandemic-caused unemployment of 16.7 percent, that would be an irresponsible step. It is to be hoped that sufficiently determined politicians will come together to whom the wellbeing of the country is more important than their own ambitions.

From a purely arithmetical point of view, despite this stalemate, it should be possible to form a transitional government. First and foremost, after three years of provisional budget management, it is about drawing up a state budget that will make it possible to revive the economy after the corona lockdown, get the unemployed back into work and strengthen the health and education systems.