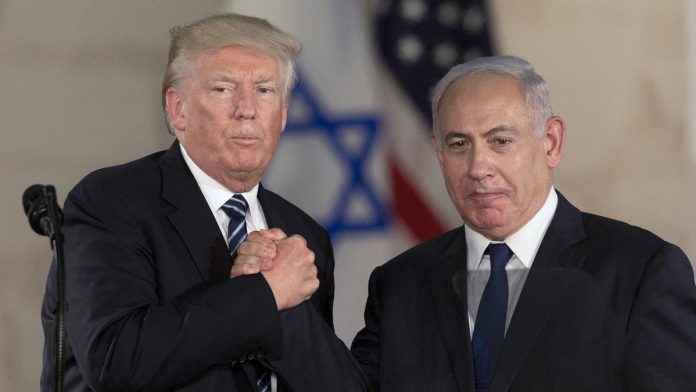 It is not him alone, responsible for allegedly corrupt misconduct before the judge, but “the entire right-wing camp is on trial,” said Netanyahu, who also assumed that part of the indictment had a “Soviet flavor”. It has been forgotten that he himself appointed the attorney general and key officials in the judiciary. His angry, but not violent supporters demonstrated in front of the courthouse. They were shouting, showing Facebook posts in which they read a “truth” allegedly hidden by the media: There is a mafia-like conspiracy against her idol, the Prime Minister.

To this day, Netanyahu has refused to resign, and there is no impeachment process like in the US. But similarities are obvious. Last year, the Likud long refused to recognize the election result, which had not given the party a majority, if the process in each individual polling station was not re-examined. Trump spoke similarly after his lost election. The preliminary climax was the Washington mob, storming the Capitol.

In Jerusalem, the head of government turned a comparative interpretation of the US events as a precaution: It was not he who was inciting, but the political opponent. The day after the riots in DC, the Likud group leader said the demonstrators in front of the Israeli prime minister’s residence, calling on him to resign almost every day, were an even greater threat to democracy than the storming of the Capitol in Washington. Not the incited individuals, but the opponents, who take to the streets in Israel in front of the Prime Minister’s office for the preservation of democracy. Netanyahu reported that he had been taken to a safe place during one of these evening demonstrations.

The newspaper “Maariv” now asked the Israelis, whether there could be a mob in Israel, like the one in Washington, that the head of government instigated. 23 percent of the respondents believed it was definitely possible, 33 percent said it was likely. Two renegade former Likud ministers recently accused Netanyahu of a “personality cult” in their resignation speeches. Former Prime Minister Ehud Barak called Trump and Netanyahu “political Siamese twins”. Both are “serial liars, despise their followers and incite against the judicial system”.

However, the former Prime Minister of the Labor Party himself has already allowed himself to be carried away to statements that are not far removed from those Trumps: If Netanyahu wins the election, a million Israelis would take to the streets “to block the destruction of democracy with our bodies” claimed Barak.

Anonymous donors have now put up posters in the greater Tel Aviv area showing Netanyahu next to Trump, with a slogan from his previous election campaign: “Netanyahu: Another league”. In the light of what happened in Washington, those words once used are now turning against him.

It is still questionable whether Netanyahu’s alliance with Trump is damaging domestically. It is true that Israel will vote in March. But three quarters of Israelis supported Trump and his Middle East policy. And unlike Trump, Netanyahu has never been elected by more than thirty percent of the electorate, which has been enough for him to head governing coalitions since 2009. After all, his political communication has long been known to the Israelis. On the day of the Washington mob, Netanyahu tweeted that “propaganda channels hiding the truth from you“, spreading a conspiracy theory concerning the attorney general, allegedly biased against him.

In Israel, long after the leaders of the other parties, he came up with an explanation of what had happened in Washington. “Lawlessness and violence are the opposite of the values ​​shared by Americans and Israelis,” said Netanyahu, who spoke of “shameful” rioting that “must be strongly condemned”. He only mentioned Trump by name when he thanked the US government for the peace agreements with Arab states and “for everything you have done and are doing for peace”.

In terms of foreign policy, the situation is likely to be different. From now on, a dark cloud hangs over everything that Trump has done, said the former Israeli ambassador to the US, Michael Oren. “I am very concerned that in addition to all the symbolic things that he has done for us, such as the recognition of Jerusalem and the Golan, this will also affect the nuclear deal with Iran.” The upcoming President Joe Biden has announced a possible return to the treaty, while Trump did not create a military threat against Tehran before that either.

It seems clear that Trump’s decisions, mostly made shortly before the elections in Israel, helped Netanyahu’s election campaigns. Now he has to do it without his self-declared friend.