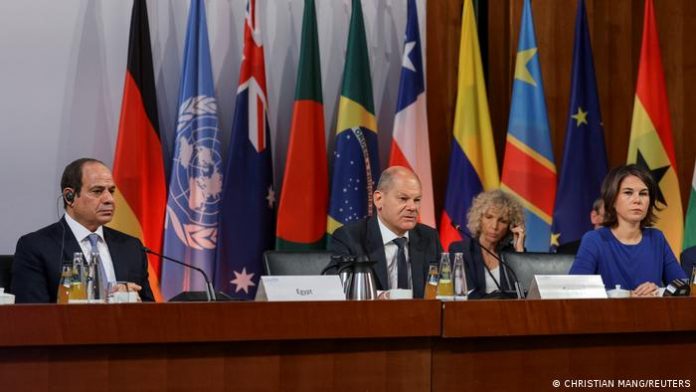 Not only Qatar, but also the United Arab Emirates are being viewed with new eyes by the EU and the German government due to the current situation in Europe and the Russian invasion of Ukraine. Egypt has also been chosen to become a partner of Berlin that has regained strength.

Abdel Fattah al-Sisi had traveled to Germany for the „Petersberg Climate Dialogue“ and made a detour to the Federal Chancellery in Berlin. Chancellor Scholz and the Egyptian President spoke to each other for more than an hour. The political and economic situation has meant that both heads of government would like to see a partner in their counterpart. Fear of energy shortages is rampant in Germany and it is Sisi who offers to be part of a solution.

The energy crisis is an international crisis, said Sisi during the press conference with Olaf Scholz. In his country, too, people suffered from the high prices. But Egypt is ready “to offer everything” to deliver gas to Europe, to “friends in Germany” to alleviate the consequences. The Chancellor was happy to hear such words, because his country not only wants gas from Egypt, but also hydrogen. It is not just a handshake, concrete agreements are to be made in the near future.

Other visits did not end so harmoniously. In 2015 Sisi was received with military honors, he met the then Chancellor Angela Merkel and the then Federal President Joachim Gauck. During the press conference, however, there were unusual scenes: opposition journalists and journalists loyal to the regime clashed. There were demonstrations over the human rights situation in the country. Norbert Lammert, then President of the Bundestag, refused the appointment with Sisi.

“Details were not mentioned”: This sentence was often said by journalists who were present at Scholz’ and Sisi’s press conference. The question was whether Scholz had addressed the human rights situation in Egypt in his conversation. Yes, we talked about it, it was simply said afterwards. And Scholz emphasized that he had pointed out to Sisi the beneficial effects of “determined steps” towards more participation and the rule of law – these “help to improve the situation and to strengthen and stabilize the economy in the long term”.

The conference of the „Petersberg Climate Dialogue“ in Bonn on the Rhine is considered the starting signal for the preparation of the world climate conference „COP 27“ in November. Berlin and Cairo are aligning them together in the Egyptian seaside resort of Sharm al-Sheikh. At the invitation of the German Foreign Minister Baerbock, representatives from around 40 countries discussed concrete steps to deal with the climate crisis.

Economic interests were and are the main impetus in bilateral relations between the two countries: Sisi’s energy and infrastructure projects bring German companies billions in contracts: For example, in May Siemens signed a contract with the government in Cairo to build a 2,000-kilometer high-speed rail network. It is the largest order in the history of the internationally active German technology group with a total of 8.1 billion euros.

In the course of the Russian war in Ukraine, Egypt initially refrained from distancing itself from Moscow. Sisi and Putin are said to get along very well, the Russian despot doesn’t ask any questions about human rights. In addition, Egypt, as the world’s largest importer of wheat, is dependent on Moscow, but also on Ukraine, and Russian weapon systems in Cairo are certainly of interest. Nevertheless, Egypt is suffering from the consequences of the war: Because of rising prices and a looming food crisis, Egypt recently received 100 million euros from the EU. The sharp rise in food and energy prices is increasing fears of social unrest in Egypt, a country of 100 million people.

Germany, on the other hand, wants to buy more liquefied gas in Egypt and work with the North African country to set up hydrogen production. The project discussed during President Abdel Fattah al-Sisi’s visit to Berlin goes well with the “very long industrial relations that the two countries have with each other,” said Chancellor Olaf Scholz in Berlin. The energy partnership with Egypt is necessary because “you can’t rely on a single partner, you have to have many good partners,” Scholz continued. In addition to the economic advantages, a political component would also come into play here, which could advance efforts to further peace in the Middle East: part of the liquefied gas would come from Israel via a partnership. The country has gas deposits off its coast, but no way to liquefy them for shipping. With the cooperation with Egypt this is now possible. Compared to other gas producers, Egypt is a godsend for Europeans hungry for a substitute for Russian supplies. The LNG, cooled to minus 161 degrees for transport in tankers, is immediately available thanks to the huge Leviathan gas field off the Israeli coast and existing liquefaction plants on the Egyptian coast. The two Egyptian liquefaction plants at Damietta and Idku were purpose-built to liquefy Israeli pipeline gas. Since 2020, Israel, which does not have its own LNG infrastructure, has been exporting its gas reserves intended for the world market to Egypt, which collects a commission from the former archenemy. Undersea reserves discovered off their coasts also want to be transported by pipeline to Greece and Cyprus in the future. Unlike Qatar, Cairo also sells most of its LNG production on the spot markets and avoids long-term contracts, a kind of counter-proposal to Qatar’s energy policy.

The 6.6 million tons of gas exported in 2021 could be doubled this year if pipelines and liquefaction plants are fully utilized. This means that the only North African country with LNG technology could replace ten percent of Russian gas supplies to Europe.