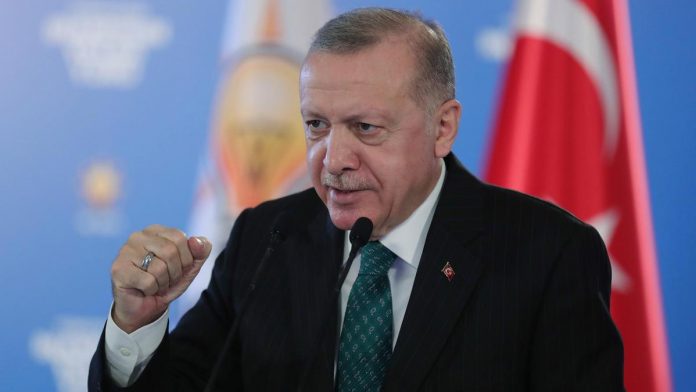 The Turkish president is calling for a new constitution. Critics suspect that he is striving for more power and lifelong rule.

The announcement by Turkish President Recep Tayyip Erdogan came by surprise. After a cabinet meeting last Monday, he said the time had come to discuss a new constitution. Because “the source of Turkey’s problems” lies in the fact that the constitutions have always been written by putschists, changes have been made to them repeatedly. But according to Erdogan, they still inhale the spirit of the military.

Erdogan also announced that details of expected judicial and economic reforms would be announced shortly. Turkey needs a “civil constitution“, he said.

As soon as the approval of the nationalist MHP, with which Erdogan’s AKP has achieved an absolute majority in parliament, he will start the debate. A few hours later, this approval was already available. MHP chairman Devlet Bahceli, with whom Erdogan had conspicuously often exchanged views in the past few weeks, said a new constitution was necessary, so that the presidential system introduced in 2018 could take root. Such a constitution would free the current order from its political and legal contradictions and strengthen the leadership of the country, said Bahceli. After all, the parliamentary system with “its powder and its deposits” weakens the presidential system, which already gives Erdogan extensive power.

Bahceli, on the other hand, has already rejected the reforms promised by Erdogan, and he has forced him to take action by demanding that the pro-Kurdish HDP, which is the third largest group in parliament, be banned.

Even neither Erdogan nor Bahceli said it, Turkish commentators suspect that Erdogan’s statement was intended to remain in office beyond 2028. Then Erdogan, who has to face a new election in 2023, would have to leave office at the latest. The independent commentator Murat Yetkin does not rule out that Erdogan is striving for an expansion of his competencies and also “a lifelong rule like Vladimir Putin in Russia, Xi Jinping in China and the Saud dynasty in Saudi Arabia”. However, this “black scenario” would only accelerate the disintegration of the system, which has started on every corner, according to Yetkin.

Soner Cagaptay of the Washington Institute think tank wrote on Twitter that Erdogan’s initiative was his first admission that he would not win the next election. He also accused him of trying to split the opposition to obtain a narrow majority. AKP-affiliated media have been spreading rumors for days that MPs from the largest opposition party, the CHP, could leave the parliamentary group. In addition, the CHP is threatened with an acid test, since its former presidential candidate Muharrem Ince has been thinking of founding his own party.

Meanwhile, the ongoing student protests in Istanbul are fading into the background. Of the 159 people arrested on Monday, 98 had been released by Tuesday. On Tuesday, professors and students continued their silent protest on campus. They held signs with the number 159 in the air, demanding the rector’s resignation. The students had also demonstrated on Monday in front of the building of the rector of the Bosporus University appointed by Erdogan at the beginning of the year. The police cracked down on them with great severity. The latest protests sparked after the arrest of four students who had hung a poster in front of the rectorate building showing the Kaaba, the Islamic sanctuary in Mecca, wrapped in the rainbow flag. The arrested are accused of “degrading religious values” and “inciting the people to hatred and enmity”.