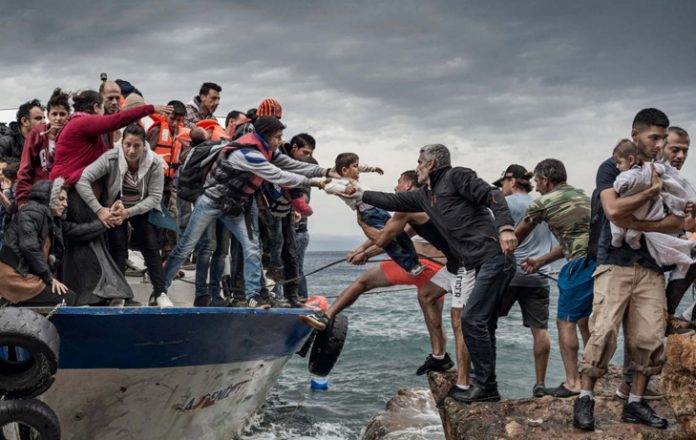 The migration to Europe in 2015 was apparently a threatening shock for many people. As large groups of refugees in Afghanistan again are making their way, EU conservatives and populists in Europe are taking a defensive stance and say: “2015 must not be repeated.”

It is questionable whether this requirement should be the top priority at the moment. That would at least be denied by those who, in 2015, are also considered to be the code for a humanitarian achievement that, in their opinion, would be appropriate again. It cannot be denied that 2015 also represented a loss of control: politicians who were overrun, were overwhelmed. Avoiding repetition means doing better this time, not making the same “mistake”.

What went “wrong” back in 2015? Many Syrians who had fled were already in neighboring countries: in Lebanon, Jordan or Turkey. What made them suddenly set off in masse to travel to the EU? Was it primarily political signals – the welcoming culture in Germany and other countries, Angela Merkel’s refusal to close the borders for Syrians, her promise that it would be “doable” – that motivated the migrants to seek their salvation in Europe?

A study by the “Institute for the World Economy” in Germany has now refuted this thesis, which was questioned early on. It is based on extensive surveys of refugees. Accordingly, there are no significant “pull effects” for the migration. There is no causal connection between the political welcome signals from Central Europe and the sharp increase in migration towards Europe in summer and autumn 2015. Migration has increased earlier. Incidentally, it is an exaggeration to believe that migrants were well informed about the political situation in possible destination countries.

Then what was it, what drove the people? The refugees suddenly received much less aid from the United Nations Food Program (WFP), the UNHCR refugee agency or the International Organization for Migration, because they in turn received much less money from donor countries like Germany or Austria. In 2014 and 2015, a third of the aid to Syria that would have been needed was missing, well over a billion dollars each. The knowledge of this connection is not new, reports on it appeared in autumn 2015 and also named the reason for the decline in payments. The war in Syria had been going on since 2011, it was out of focus and there were other crises. The aid programs are largely based on donations, with no obligation to pay, no secure financing.

From 2013 onwards, all aid operations in and around Syria were poorly equipped, confirms a staffer, who at the time headed the German regional office of the WFP. At the end of 2014, the WFP warned that it would have to stop providing food aid to 1.7 million Syrians in neighboring countries. The cash contribution from the WFP, the “basic social assistance” for the refugees, flew into special electronic cards with which food, hygiene items and, if necessary, medicines could be bought. A campaign by the WFP was successful in the short term, but in the course of 2015 the $ 27 to $ 30 paid per capita per month was partially reduced to $ 13.

In addition to hunger, there was a lack of prospect. More than 90 percent of the Syrian refugees consciously wanted to stay in the region and return to their homeland as soon as possible. This hope faded more and more. The terrorist organization Islamic State was also growing stronger at that time, and it was clear that there was no acceptable solution of the war. At the same time, tolerance towards refugees decreased in neighboring countries. In this situation, many people would have decided to invest the last of their resources in fleeing to Europe.

The world governments seemed to get the lesson quickly. At a donor conference in London at the end of 2015, German Chancellor Merkel announced that Germany would take over 50 percent of the funds that the WFP had earmarked for the Syria region in 2015, more than 500 million euros. As a result, Germany quadrupled its humanitarian commitment to Syria. It decided to transfer its donation as early as spring. Until then, for budgetary reasons, this had only happened in the second half of the year and therefore too late.

As far as the Afghan refugees are concerned, the situation in their home country was critical even before the current escalation. The main destination countries are Pakistan, which according to official figures hosted 1.4 million Afghans in 2020, and Iran (780,000). Researchers estimate that there are twice as many. Pakistan needs $ 330 million for humanitarian aid in the current year that has not yet paid. In Iran, it looks similar.

All this puts into perspective the many, almost pleading calls by European politicians to shelter and care for refugees as close as possible to their place of origin – with the ulterior motive that, unlike in 2015, they should not come to Europe in this way. In view of the structural underfunding of local aid, a “sham solution”. Especially since it will not be easy to conclude agreements with neighboring Afghan states, following the example of the EU deal with Ankara. Pakistan and Iran are even more ambivalent partners than Turkey, with whom it is already difficult. These countries also have enough problems of their own.

According to experts and the EU Commission, it is all the more important to bring as many needy refugees as possible through “resettlement” directly from the region to Europe in order to save them the risky land and sea voyage. Canada has promised to take in 50,000 Afghans in this way, while Great Britain offers 20,000 places. The Luxembourg Foreign Minister Jean Asselborn brought a number of 40,000 to 50,000 people into play on Monday, who would have to be distributed among the states of the European Union. It is unlikely that the Europeans, who are divided on asylum policy, will agree on this.