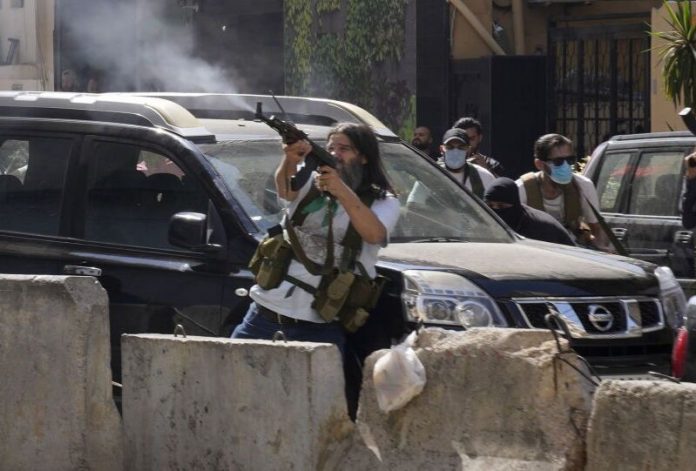 It was “a little civil war,” said a Beirut resident on YouTube, living in the heart of the Lebanese capital known for its cafes and bars. The streets were already swept empty. The army had cordoned off the area, the man himself had quickly fetched the children from school and from then on stayed at home while shots rang out in the surrounding neighborhoods. The scenes that took place in the area for hours on October 14 aroused worry or bad memories for many in the Lebanese capital. Hooded men firing assault rifles and bazookas at houses, people fleeing the fighting in a panic. There were pictures of schoolchildren seeking shelter in the classroom under their desks or in the hallway. There are repeated outbreaks of violence in Lebanon. But what happened last Thursday went way beyond the usual. And the fighting ran in parts along well-known civil war fronts.

Tensions have been increasing for days. Not only that the economic collapse and the accompanying supply crisis are straining people’s nerves. A power struggle is raging over the investigation into the circumstances of the explosion in the port of Beirut. The Iran-supported Hezbollah wants to force the removal of investigating judge Tarek Bitar. Together with the Shiite Amal movement, it had announced a demonstration for Thursday morning. Snipers opened fire on the crowd from rooftops, and at least six people were killed. Numerous videos also showed fighters in typical Hezbollah outfits in action. The Lebanese army cordoned off the area, tried to clear the streets and stormed houses where attackers were suspected. They announced that they would shoot anyone carrying a gun on the spot.

The government, which has only recently been in office and after lengthy negotiations, has tried to demonstrate a determination it lacked in the recent dispute over Bitar’s dismissal. A picture was circulated showing the new Prime Minister Najib Mikati during an emergency meeting with Army Chief Joseph Aoun next to him. Hezbollah and Amal recently successfully sabotaged a cabinet meeting that was supposed to be used to discuss how Lebanon should be saved from collapse. But Hezbollah obviously has other priorities.

“This is a politicized investigation,” said its leader, Hassan Nasrallah, in a speech. Hezbollah has made it clear to let the new government break up in case of doubt. Their representatives have repeatedly accused Bitar of acting unilaterally – and on behalf of foreign powers. Some observers in Beirut see the sabotage campaign not only as an attempt to smother the investigation entirely, but even consider it possible that Bitar “got too close” to Hezbollah.

Most recently, the leader leader of the Christian “Forces Libanaises” and a bitter enemy of Hezbollah, stated in an interview that the resistance of the Shiite organization made him doubt that it really had nothing to do with the catastrophic port explosiom. He demanded that Mikati should withstand the pressure and let the judiciary do its job. And when he was asked about Hezbollah’s announcement that it would take to the streets while Bitar was in office, he said: “Everyone knows that there is another street behind every street.” The party’s supporters have long been sounding that the armories are for just in case. And part of the battle area belongs to the Beirut empire of warlords from the civil war. Would he really dare to challenge Hezbollah, the strongest military force in the country?

Supporters and representatives on both sides blamed each other for the escalation. Hezbollah and Amal used the bloodshed to fuel their tale of a foreign conspiracy. They called on their people to be prudent. Nevertheless, security experts in Beirut warned against acts of revenge, at the latest when the dead are buried. Hezbollah cannot leave the death of its supporters unanswered, said a Lebanese observer who is well connected to the security forces. For many Beirut residents, there was one other question that preoccupied them: whether the outbreak of violence was just the beginning. In any case, the traffic on the streets leading out of town was very heavy for a Thursday lunchtime last week.