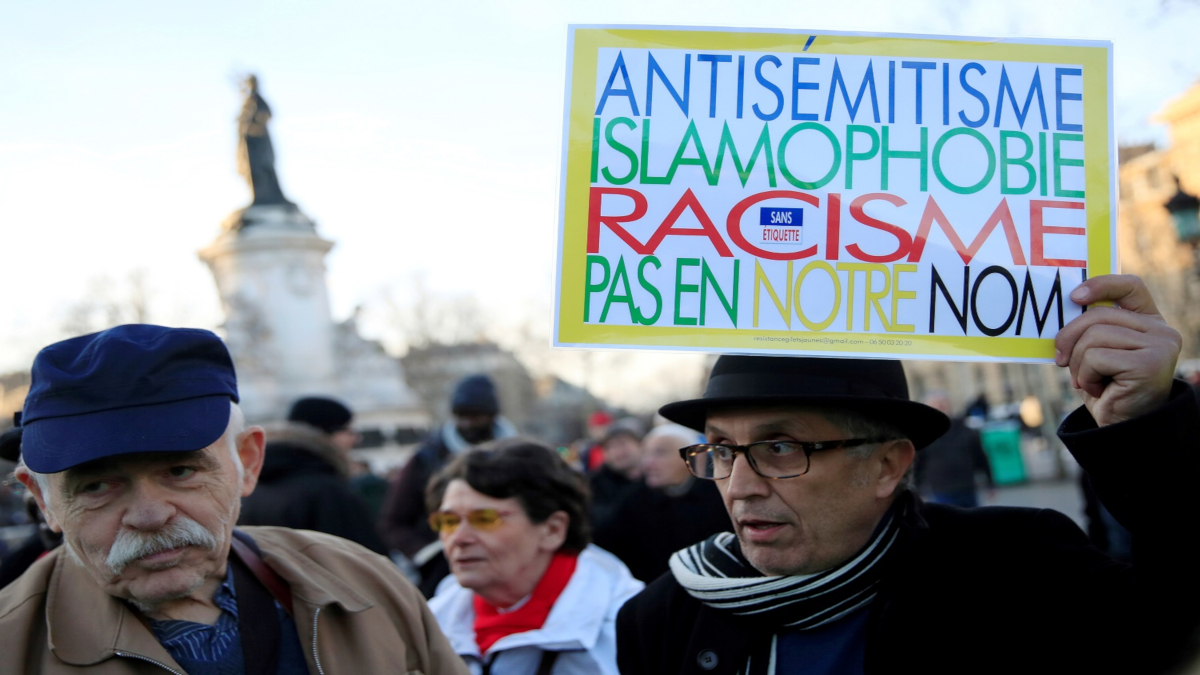 Jewish shop owners are hounded, threatened and run out of town. Their businesses are the targets of prolonged campaigns of intimidation, culminating in months of demonstrations at their doors with up to a thousand angry protesters at a time shooting red paint bombs and mutilated dolls at employees.

Owners of these businesses threatened with death and (real) bombings. The threats including their families.

Police refuse to step in, saying the protesters are behaving lawfully. In fact, a top politician supports and is listed as a patron of the organization behind the protests.

Since we know how the Nazi boycott of Jewish businesses which began in 1933 ended, let’s talk about what’s happening in today’s UK.

The Palestine Solidarity Campaign, of which Labor party head Jeremy Corbyn is a patron, has, in reality, been waging this campaign against Jewish businesses that sell Israeli products (both those originating from inside Israel proper as well as those made in the disputed territories) since 2001.

They have not only targeted Jewish businesses but also the Israeli Philharmonic Orchestra at the Royal Albert Hall, an Israeli theater company at Shakespeare’s Globe and an Israeli LGBT event in London.

The group is prominent in the Boycott, Divestment and Sanctions (BDS) Movement against Israel, which has been deemed anti-Semitic at its core by the U.S. State Department’s definition of anti-Semitism.

Most recently, the group has forced shops selling Israeli cosmetics to close, like the one owned by UK citizen Nissan Ayalon, 33, who was forced to move his business three times, starting from scratch each time, before finally giving up and fleeing the country.

“Eventually, I lost faith in being able to make a life once again in Britain,” Ayalon said in a newly-released film called Hounded, which documents the on-going campaign of intimidation of Jews who sell products from Israel. “I just couldn’t keep moving to a new city every two years. I had a family to look after.”

The true litmus test of anti-Semitism is whether the actions are against Jews per se (bigotry) or simply making a political statement. The BDS movement holds Jews to a different standard than in similar conflicts worldwide. It is a clear case of anti-Semitism.

Moreover, it is a known fact that while the movement has created little damage to Israel, the movement significantly harms the Palestinian people (another litmus test of its real raison d’etre: anti-Semitism).

Businesses that are targeted in Israel and forced to close because of the movement are mainly located in the disputed territories, which are known for employing large numbers of Palestinians (and paying them at a higher rate than they would receive working for Palestinian companies.

These jobs not only benefit the individuals themselves but also translate to more tax income for the Palestinian Authority – not to mention the good will and peace building atmosphere these companies have been known to create among their Jewish and Palestinian workers.

But the story doesn’t end there (and if it did, it would be bad enough).

Germany’s interior minister and the Berlin mayor allowed the annual pro-Iranian/pro-Hezbollah Al-Quds (Jerusalem) Day rally to take place in Berlin. The purpose of the rally is traditionally to call for the destruction of the Jewish state.

The U.S. embassy in Germany tweeted, “Germany’s federal courts decided years ago that Hezbollah is a unified organization dedicated to the destruction of Israel. Symbols of Hezbollah are banned, why not the entire organization?”

The rally also came on the heels of an unprecedented report released by Germany’s domestic security agency about how anti-Semitism among the country’s Muslim population is a major problem in the country.

Not only has Merkel and her interior minister blatantly refused to ban the internationally-recognized terror group Hezbollah dedicated to the destruction of Jews, they have refused to even entertain the question.

And now, due to our ability to connect halfway across the world with a simply click of a button, this phenomena can be spread throughout the globe.

In Australia, a Muslim doctor has been the target of an intimidating anti-Semitic campaign for working with a Jewish organization that helps sick Palestinian children obtain necessary and life-saving treatment in Israeli hospitals.

Dr. Jamal Rifi is a prominent figure in Sydney’s Shiite Muslim community from Lebanon. He has been recognized for his work in preventing the radicalization of young Muslims by ISIS. Yet, Rifi is now considered an “enemy” by pro-Iranian and pro-Hezbollah activists in his community.

He and his family have received death threats. He is afraid to go back to Lebanon to visit his mother for fear of being arrested and prosecuted by Lebanon’s Military Court.

Yet, is Rifi’s situation that much different than Germany’s (current) government-sanctioned anti-Semitism?

In 1933, Jewish businesses began to be targeted by Nazis. It was slow. In fact, the first boycott was a one-day affair. It progressed to a campaign of ever-increasing harassment until it culminated in systematic pillaging, forced transfer of ownership to Nazi Party activists, arrests and ultimately the murder of Jews who owned businesses (of which, in Berlin alone, there were 50,000).

I am not one of those people who think Nazi Germany can happen again. Many would call me naïve; others might call me unwarrantedly optimistic. Perhaps they are right.

But the world is different, certainly when it comes to what we are willing to tolerate and not.

The problem with this equation is the fact that our “tolerance” has become a double-edged sword.

In this case, we have extended our tolerance to Islamists, who, in the cases above, use Israel as the cover for their anti-Semitism. If anything is as dangerous in our time for Jews as it was in the 1930s in Germany, it is the pass Islamists are given when they play the Islamophobia card.

This is how our supreme value of “tolerance” has taken us off kilter.

We have seen this in America in response to the blatant displays of anti-Semitism from Congresswomen Ilhan Omar and Rashida Tlaib. They have been handed a free pass from their own Democrat party.

If the Western world still has the will, they can call this out and stop it. If not, I will be changing my opinion. Because the one thing, unfortunately, that all those who exist on the extremes can agree on is hatred of Jews — historically and now.