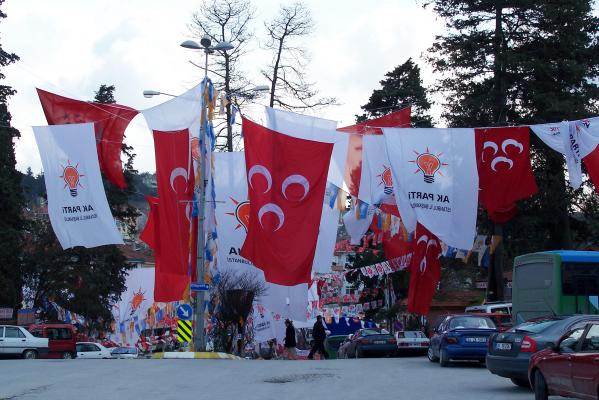 Relations between Germany and Turkey are considered close and diverse, but also complicated. For several years they have been exposed to increasing stress. The reasons for this can be found primarily in Ankara, where an authoritarian style of government has taken hold under President Recep Tayyip Erdogan. Around 2.8 million people of Turkish origin live in Germany. Many Germans are aware that Erdogan’s Islamist government is trying to influence them through the Ditib mosque association, for example. By contrast, the activities of Turkish right-wing extremists in Germany are less well known.

The Gray Wolves, as the Turkish nationalists call themselves, are one of the largest right-wing extremist groups in Germany. A new study carried out on behalf of the Berlin branch of the non-governmental organization American Jewish Committee (AJC) estimates that around 18,000 people belong to the scene. For comparison: the right-wing extremist National Democratic Party (NPD) has around 3,600 members, the right wing of the AfD, which was officially dissolved in 2020 and was assessed by the German domestic secret service as right-wing extremist, last had around 7,000 members.

Young people in search of their roots

One development in recent years is that more and more young people from the third or fourth generation of immigrants are coming into contact with the ideas of the gray wolves, explains the author of the study. In this way, young people found new identities in search of their roots. He shows how the gray wolves approach their target group. Social networks and styles of music such as rap and hip-hop play an important role in this. The texts are hard to beat in terms of clarity: “Kurd, you wreck, you piece of dirt, this is a Turkish gangsta rap”, it says in one video, and in another: “You want to insult my country, and I’ll give you the coup de grace.”

There are some notable episodes in the history of Turkish right-wing extremism and its relations with Germany: One example is a visit by Alparslan Türkes, the founder of the right-wing extremist party of the Nationalist Movement (MHP), to Franz Josef Strauss in April 1978. Here the Bavarian Christian Democrat promised his visitor to create “a favorable psychological climate” for the gray wolves in Germany. When choosing foreign allies, Strauss often had few scruples, and the two politicians met in their goal of fighting communism.

Türkes, who died in 1997, also emphasized the ideological closeness of his party to the German Nazi NPD at the end of the 1970s. In 2009, after the MHP had achieved a spectacular success in the Turkish local elections, the then Hessian NPD leader Jörg Krebs tried to revive this alliance. In return, however, he received verbal beatings from the far-right comradeships, for whom Turks are an enemy. Cooperation between German and Turkish right-wing extremists therefore did not materialize.

The groups are devoted to Islam to varying degrees; The Atib is considered an Islamist branch of the Turkish nationalist movement. “Above all, it represents an Islamic nationalism. Within the MHP the pan-Turkish traits are emphasized more”, explains the AJC report. In recent years, however, the two sides have come closer to each other. The Islamists have become more nationalist and the nationalists more religious. This reflects the situation in Turkey, where the MHP has been part of a coalition with Erdogan’s Islamist AKP since 2018.

Today the gray wolves are aiming for a “Turkish-Islamic synthesis”. The right-wing extremists are “one of the instruments in Erdogan’s toolkit when it comes to influencing the diaspora,” an expert on the scene reports. Herbert Reul, the Interior Minister of North Rhine-Westphalia, spoke in November 2020 of an “extensive network of people and organizations” that “not only serves to actively form opinions in the interests of the Turkish government”.

Some dream of a great Turkish empire

The gray wolves have an indirect influence on the prevailing understanding of Islam in Germany: the Atib is the association with the largest number of members in the Central Council of Muslims and provides one of the nine board members there. The Central Council, in turn, takes part in the meeting of the German Islam Conference initiated in 2006 by the then German Interior Minister Wolfgang Schäuble. This led to frictions in the integration councils and interreligious dialogue circles: For example, the Association of Alevi Young People in Germany withdrew from the interreligious dialogue. With around 15 percent of the population, the Alevis are the second largest religious group in Turkey and maintain a liberal understanding of Islam.

Some of the gray wolves speak of a Turkish master race as well as a Jewish world conspiracy and dream of the great empire “Turan”, which is supposed to extend from the Balkans to Central Asia. But many also appear moderate, at least outwardly. “You are European Turkishness”, Alparslan Türkes called out to his audience at an event in Essen in the late 1990s. This gave rise to the motto “Become a German, stay a Turk”.

The Gray Wolves in Germany are a Janus-headed movement that has a legalistic and a criminal side, says the Essen-based political scientist and Turkey researcher Burak Copur. One side is trying to gain a foothold in the German public and in politics, the other is working with the Turkish mafia and with rocker bands.

In German local and state politics, there were already some candidates from the Gray Wolf environment, for example in the Ruhr area. In Gelsenkirchen, a city council had to resign because of its ties to the nationalists, but a Christian-democratic politician in Duisburg retained his mandate. The politically relevant German parties, however, are too large to be infiltrated by Turkish nationalists.

Only a minority of the gray wolves use violence, according to German security circles. After the failed coup attempt by parts of the Turkish military in July 2016, however, Kurdish institutions and supporters of the movement of the Islamic preacher Fethullah Gülen, in exile in US, were also attacked in Germany. In May 2020 a Kurd was murdered in Dortmund. On his Facebook page, the perpetrator showed the “wolf greeting”, in which the little finger and index finger are stretched out and the middle and ring fingers are placed on the thumb. German politicians such as the green member of the Bundestag Cem Özdemir, who deal critically with the gray wolves, have been threatened by them.

During the war for the Nagorny Karabach region, in which Turkey supported Azerbaijan against Armenia, there were also attacks on Armenians in Germany: In July 2020, a vehicle from the Armenian embassy in Berlin was set on fire. At the end of 2020, a Cologne-based Armenian Bishop reported threats against him and his compatriots. “The gray wolves will get to you!”, said a letter to him, the clergyman wrote to the North Rhine-Westphalian interior minister Reul.

A ban is not expected for the time being

In France, the gray wolves were banned in late 2020, in Germany the parliament has spoken out in favor of a ban. Such a step is currently not imminent, it is said from security circles, also because most Turkish right-wing extremists acted wisely and made it difficult for the authorities to prove them in court that they were anti-constitutional. The fact that the Atib is mentioned for the first time in the latest report on the protection of the constitution for 2019 ensures that the problem is discussed. In Austria, symbols of the movement such as the “wolf greeting”, the howling wolf and the three crescent moons were banned.

A ban does not dissolve the movement into thin air, but it is at least a signal that one is aware of the problem. Above all, more educational work is needed to prevent young people from sliding into the scene.