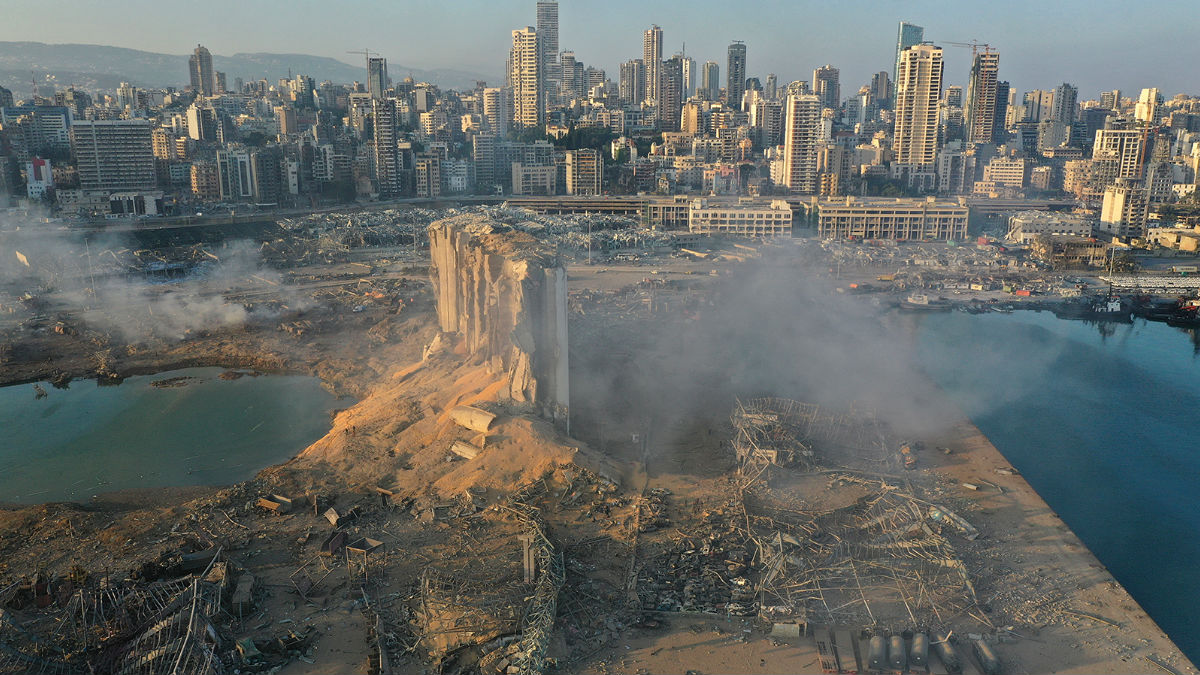 Even a week and a half after the disaster in Beirut, the exact sequence of the explosions has not yet been clarified. It is possible, however, that only a small part of the 2,750 tons of ammonium nitrate stored in the port detonated with currently 220 dead people and over 6000 injured.

The cause is a fire that broke out due to welding work. “When pure ammonium nitrate is exposed to a fire, only part of the total amount normally explodes, around 10% to 30%,“ an expert on explosives from the Norwegian Defense Ministry says.

The remaining 70% to 90% of the ammonium nitrate stored in Beirut would have decomposed in a thermal but not highly explosive manner, with gaseous and solid reaction products being formed. In fact, ammonium nitrate becomes unstable at temperatures above 170 degrees Celsius. This effect is also indicated by the gigantic orange-brown plume of smoke that formed over the site of the explosion. It is thought to originate from nitrogen oxides that are released when ammonium nitrate decomposes.

In making his estimate, the expert relies on a guideline widely used in the industry that was developed by a working group of international experts (Safex International). In this document, the explosion yield of ammonium nitrate in the event of fire is given as “low, around 10%”.

The size of the explosion crater is in line with an only partial explosion of the camp in Beirut. It has a diameter of around 125 meters and reaches a depth of more than 40 meters. In terms of its size, it is comparable to the crater that was left by the world’s first ammonium nitrate catastrophe. It took place in September 1921 in Oppau, Germany on the site of what was then the Baden Aniline and Soda Factory (today: BASF).

This accident was analyzed again four years ago and gained new insights into what has been the biggest catastrophe in the chemical industry in Germany to date. 559 people died in the vicinity of the factory. The last of two successive explosions is said to have been audible in Munich and Zurich. There were two explosions in Beirut, too, and also in the Lebanese capital, the second was by far the more powerful. According to media reports, it was noticeable in Cyprus, 250 kilometers away.

But there are also important differences between the two accidents. While pure ammonium nitrate was stored in Beirut, which was intended for the manufacture of explosives, in Oppau it was a mixture of two salts: ammonium nitrate and ammonium sulfate.

It is uncertain what quality the ammonium nitrate stored in the port was, how it was stored, and whether it contained impurities that increased the risk of explosion. These questions must be clarified in order to be able to precisely determine the causes and ultimately also the amount of the ammonium nitrate that has exploded.

There is at least one point of agreement: “Such large quantities of the dangerous substance must not be stored in the vicinity of inhabited areas.” The Lebanese authorities have also admitted this mistake. For the dead and injured, this realization comes too late.