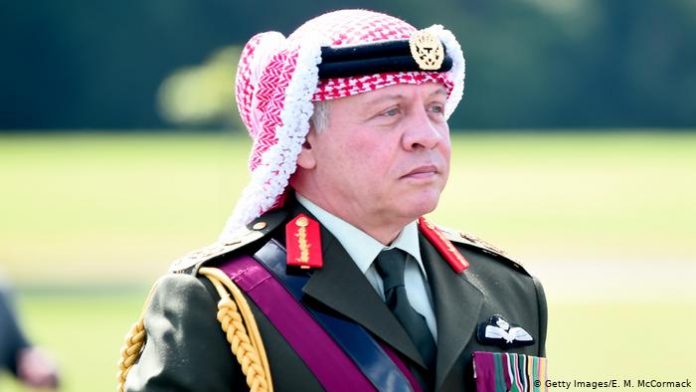 Queen Rania of Jordan knows how to dress. In the past, the fashion magazine Vogue devoted entire picture galleries to the wife of the monarch Abdullah II: the queen at receptions and political meetings in outfits by Valentino, Givenchy or Peter Pilotto. A queen who dresses like a queen – no big news, one would think. And yet, at the beginning of 2019, Her Majesty felt called to clarify something: Queen Rania officially announced that many of the dresses she wore were merely borrowed or given. One has always considered the “moderation of your expenses”. There have been significantly fewer glitter photos since then – the kingdom has a reputation to lose, after all.

Unlike the kings and princes of other Arab states, the monarchs of Jordan would rather present themselves as modest rulers, explains an expert from German “Friedrich-Ebert-Stiftung”. The country is considered a haven of stability in the middle of the heated Middle East. The security situation is comparatively good, and the growing poverty in the country is intended to alleviate aid payments from abroad. According to the World Bank, 2.7 billion US dollars flowed to Jordan in 2016, more than to Sudan, Yemen or the neighboring Palestinian territories.

At that time, around 180 million euros came from Germany; in 2019, according to the German Development Ministry, it was more than 510 million euros. The European Union and the USA see King Abdullah II bin al-Hussein, the humble yet influential ruler, as a reliable partner in an unstable region. He has ruled Jordan for more than 20 years, and so far he has managed to get a grip on every political crisis. The money from the West was well invested there.

But now the Pandora Papers – documents from the world of the offshore industry that were leaked to the International Consortium of Investigative Journalists (ICIJ) – what neither the generous donors nor the Jordanian public had noticed so far : The queen’s expensive clothes were apparently not the only luxury that the image-conscious palace had allowed itself. According to Pandora Papers, Abdullah II bought 14 properties for high demands between 2003 and 2017. The total value of the chic villas and apartments is according to calculations by the ICIJ at 106 million US dollars.

The king bought the property through mailbox companies, presumably to hide the purchases from the world and his people. The monarch has owned at least 36 such letterbox companies since his coronation in 1999, according to the documents.

So the palace came to three apartments in London, acquired in 2011, when the civil protests of the Arab Spring also spread to Jordan. Probably the most expensive of the three apartments, in two adjoining townhouses only a few minutes’ walk from Buckingham Palace, according to the documents cost 9.4 million US dollars – solid brick facade, canopies supported by pillars, something for people with the necessary change. Also acquired through mailbox companies.

Buying, starting, or owning a mailbox company is not illegal per se. The firms are often used to avoid taxes or hide cash flows or the owners of assets. As king in Jordan, Abdullah does not pay any taxes anyway – but he does pay taxes abroad, for example when he officially buys real estate there.

Upon request, the Jordanian king has a law firm inform that the information available to the ICIJ is out of date or incorrect. The king always paid taxes in every country. The use of letterbox companies is normal for exposed people like the King of Jordan, as this could, for example, prevent real estate agents from driving up prices in the knowledge of the prominent clientele. In addition, this would ensure the anonymity of those interested, also to protect the royal family, which is the subject of terrorist threats.

The Pandora Papers also document the purchase of three apartments in Washington, D.C. A 2012 apartment purchase report said the apartment had seven bedrooms and seven bathrooms. Purchase price for all three properties: $ 9.69 million. Broker photos from that time show the pretty view of flowing water, plus spacious rooms with modern art, large built-in cupboards and an open kitchen with space for many guests.

The royal family now resides even more pompously in Malibu on the Californian coast, where the king owned three properties with a total land area of ​​around 15,000 square meters until at least 2017 or still owns it – the documents also reveal that. Research found no evidence that the owner has changed since then. On the contrary: since the purchase, the king even had the property renovated.

One of the villas is on a cliff, a two-story, bright building with no direct neighbors. According to the realtor information, it has a pool, seven bedrooms, eight bathrooms and a fitness studio spread over 700 square meters, as well as a breathtaking view of the Pacific Ocean. The house right next to it even has almost twice as much living space. The price for all three residences combined: almost $ 70 million.

The fact that the king lives so luxuriously should apparently be deliberately hidden. This is suggested by documents that ICIJ was able to see. There is written about the king as “you know who”, “you already know who”, elsewhere than an economic beneficiary based in Jordan, as if the monarch were someone. Although the name of the king and his address are noted in at least one internal document of an offshore law firm, he is not identified as a politically exposed person, as required by the rules of good compliance.

The monarch, it is said from those around him, paid for the houses with his private wealth. International aid payments were not used to buy real estate. But how the king and his family earned so much money, how high the share of Jordanian taxes is, how much income from the tourism business went directly into the possession of the farm.

The unveiling of the royal real estate empire could put the king in distress. The voices against corruption are also getting louder in the Jordanian kingdom. According to the corruption index of the organization Transparency International, Jordan ranks 60th out of 180 when it comes to perceived bribery – and thus behind countries like Cyprus and Botswana. As early as 2019, the former Jordanian Minister of Labor, Abdullah II, called for action against corruption. And then in June 2020 a former MP was arrested for “insulting the King and Queen” after calling for the fight against corruption in several videos.

Most recently, even half-brother and the former crown prince of the king, Hamzah bin Hussein, criticized the palace. The ruling system “decided that his personal interests, his financial interests, his corruption are more important than the life, dignity and future of the ten million people who live here”. Hamzah bin Hussein reported from his “house arrest” last April by video message. And even if behind his criticism there is probably a power struggle for rule in the royal family – the catchphrase corruption has now caught on with the Jordanian people.

King Abdullah II himself knows this too – which is why he himself demanded more transparency from state institutions in June 2018. In the summer of 2020, the Jordanian Prime Minister spoke of preventing tax evasion. 650 companies were then searched.

The king’s mailbox companies apparently did not fall under the transparency offensive.