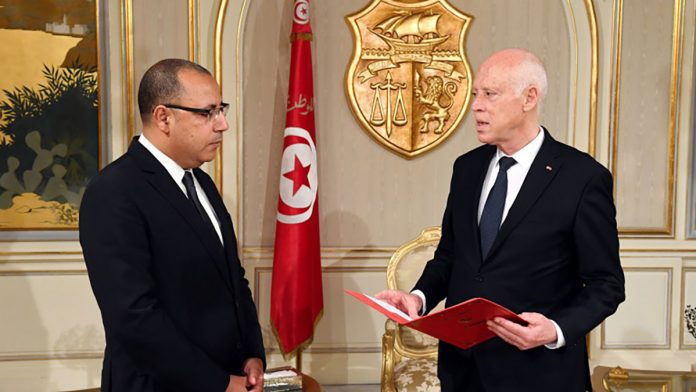 The Tunisian President wanted to take action. After the government was disempowered, Kaïs Saïed imposed a lockdown on the whole country, which also practically brought political life to a standstill: gatherings of more than three people are prohibited, the night curfew is brought forward to 7 p.m., travel between cities of the country are prohibited. Of course, this also has to do with the devastating corona wave. But no picture describes the political situation as aptly as that of the soldiers in front of the parliament in Tunis, who also denied MPs access on Tuesday – Saïed sent them home for a month. After clashes, some of which were violent, peace returned to parliament on Tuesday.

Saïed had previously defended his decision in a video message. “The greatest danger to a nation is an internal explosion,” he warned. In talks with representatives of civil society, he is said to have asserted that he would respect civil rights and not want to achieve a dictatorship. At the same time, however, he expanded his competencies: He not only deposed the head of government Hichem Mechichi, who also held the office of interior minister. Saïed also dismissed the Minister of Defense and the acting Minister of Justice. All key departments are ultimately under his control.

Western governments, which have kept Tunisian democracy alive for years with billions of euros, are still reluctant to speak openly of a “coup”. The US Secretary of State Antony Blinken only called on the Tunisian leadership in general to respect the “principles of democracy and human rights”. For the respected Tunisian constitutional lawyer Sana Ben Achour, on the other hand, it is absolutely clear that it was a coup d’état: The president had delegated all powers to himself, “Tunisia has thus rejoined the club of dictators,” she told French “L’Humanité” newspaper. Saïed confronts her with a “very messianic self-image”. He apparently wanted to save Tunisia as the “father of the nation” and in doing so left the constitution.

The President relied on Article 80 of the Constitution in dismissing the Prime Minister. In vague terms, it gives the head of state the right to “take the necessary measures in the event of an imminent danger which threatens the nation or the security or independence of the country and which hinders the proper functioning of the state organs”. To do this, however, he must consult the Constitutional Court and inform the President of Parliament and the head of government. This did not happen – and a constitutional court does not exist. Although the 2014 Constitution required it, it has not yet been created. This has been prevented for months by a bitter party dispute over the election of a judge, which highlights the country’s political blockade. In addition, the constitutional article provides that the parliament meets in “permanent session”. Saïed, however, has “frozen” its activity for a month.

The president actually knows the constitution very well. The non-party outsider was a law lecturer until he surprisingly won the presidential election in autumn 2019. During the election campaign, the lawyer had promised to defend the constitution against corrupt party politicians. His victory – almost 73 percent in the runoff election – he then called a “second revolution”, alluding to the peaceful upheaval in 2011. The now 63-year-old politician, nicknamed “Robocop” because of monotonous facial expressions, is more of a conservative revolutionary: He considers homosexuality to be a disease that should continue to be punished. He would like to replace parliament with local, grassroots democratic people’s committees.

Since taking office, his main concern has been his own power, which he has relentlessly tried to enforce against parliament and government. Since January, he has refused to appoint the new ministers chosen by Prime Minister Hichem Mechichi, who was dismissed on Sunday. The chairman of the largest party in Tunisia, Rached Ghannouchi, had created a center of political power there as President of Parliament. Since Sunday evening, the president has locked the door to parliament for him too.

Saïed’s predecessor, Béji Caïd Essebsi, who died two years ago, stood out in the presidency as a paternal mediator who was able to mediate between the political forces in critical phases of the young democracy. After the coup on Sunday, his successor started a real discussion offensive. While most parties opposed his latest move, he met with the country’s major organizations. The powerful trade union federation UGTT could play a more important role. The unionists did not expressly condemn the president’s actions. They even shared his analysis of the situation and called for the dialogue that Tunisians were able to enter when their country was on the brink of civil war after 2011. In 2015, the so-called Quartet for National Dialogue, to which the UGTT also belonged, received the Nobel Peace Prize for it. Saïed now promised his interlocutors that he would adhere to all deadlines and guidelines. People in Tunis are eagerly awaiting how quickly he will appoint a politician as the new head of government.