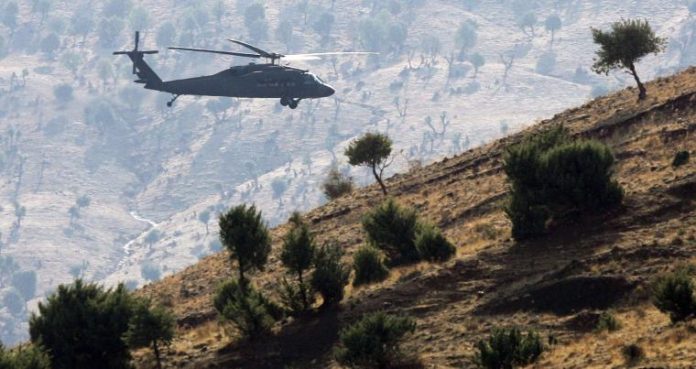 Two foreign ambassadors argue in Iraq. The Iranian ambassador says on television: “We do not accept at all that someone – be it Turkey or any other country – intervenes militarily in Iraq, advances or has a military presence.” The Turkish ambassador replied a little later on Twitter: The Iranian ambassador was “the last person who should instruct Turkey to respect the borders of Iraq”.

Sinjar, the settlement area of ​​the Yazidis, is a poor area, badly marked by the rule of the jihadists of the “Islamic State” (IS) as well as by the war that was necessary to drive them out. “We are just the pawn in a great political game by other powers,” complains one Yazidi citizen. “We need hospitals, not power struggles.”

In Sinjar several conflicts, some of them cross-border, overlap. Rioters from the Kurdish PKK organization have established themselves in the region that Turkish President Recep Tayyip Erdogan is bitterly fighting – including on Iraqi soil, where the Turkish army is flying air strikes and has set up several bases. “We could come overnight,” Erdogan threatened. However, the Turkish ambitions go beyond the expulsion of the PKK from Sinjar. It’s about claims to power. The nearby city of Mosul is seen by many in the political class as a “lost home” that has slipped away from the Turkish grasp due to the collapse of the Ottoman Empire.

Only the PKK fighters in Sinjar have come to terms with a powerful force in Iraq: with Iranian Shiite militias. Several hashd al-shaabi (popular mobilization) brigades have recently been relocated to Sinjar; there is talk of 2000 to 3000 men. The paramilitias who were detained in the course of the war against IS are nominally subordinate to the Iraqi head of government. But many militiamen and commanders are fighting under their banner, who willingly implement the strategic goals of their supporters in Tehran. The Iranian regime in Sinjar is concerned with securing a strategically important land connection. The area lies along expressway 47, which leads from Tell Afar, also controlled by militias, to the border with Syria. The PKK also uses the area as a transit route for its Kurdish brothers in arms in northeast Syria.

Commanders of these Shiite militias in Baghdad have already threatened Ankara with a “war of attrition”. “Iran will not allow Turkey to come here,” says a local Yazidi hashd militiaman who has been fighting in the ranks of the paramilitary for two years. He puts a possible invasion of the Turks on the same level as the conquest by IS. Many others would not go that far. But there is great distrust of the Sunni regional power. Yazidis who stand between the lines have not forgotten that Sunni Arab neighbors made common cause with the ISIS jihadists.

When the terrorist organization captured Sinjar in August 2014, the civilians living there were at the mercy of it. The Peshmerga fighters of the then president in Kurdish northern Iraq, Massud Barzani, had withdrawn. The Yazidis fell victim to a brutal campaign of extermination. The jihadists looted, pillaged, destroyed temples, cemeteries and churches, murdered, enslaved and raped Yazidi women and abducted children. It was PKK fighters who shot free an escape corridor to Syria for the civilians who had fled, who were huddled in the mountains. There the Yazidis set up their own “resistance units” for Sinjar with the help of the PKK. Ankara is now targeting them because of their proximity to the Kurdish organization.

Later came the confrontation between the central government in Baghdad and the Kurdish autonomous government of Barzani in northern Iraq. Their Peshmerga had returned to Sinjar in the course of the pushing back of the IS. However, they had to back off when the conflict between Baghdad and the autonomous government in Erbil escalated after the Kurdish independence referendum in autumn 2017. The Hashd al Shaabi took control of the Sinjar region, which is disputed between Baghdad and Erbil. An agreement between the central and autonomous governments in October should defuse the situation, contain the armed groups, allow the reconstruction and return of tens of thousands, if not hundreds of thousands, of displaced persons. But the new hegemons in Sinjar do not want to give up their influence. The PKK is not stopping its cross-border operations.

Baghdad and Erbil are somewhat powerless in the face of the escalation. “There is a high probability that there will also be a military exchange of blows,” says Bahjan Selki, a Peshmerga general in Arbil. “Turkey will not stand idly by the activities of the PKK and its allies.” At the same time, he makes it clear that its armed forces cannot prevent this, and speaks of reliable information that the Yazidi militias, which are close to the PKK, receive pay from the Hashd al Shaabi. Autonomous Government officials believe that the rockets that hit the Erbil airport site in mid-February were not just an attack on US troops stationed there. It was also a message to the Turkey-friendly camp of Nechirvan Barzani, the president of the autonomous government, not to take the side of Ankara too clearly in Sinjar.

The victims of the ongoing power struggle are civilians. 250,000 to 300,000 Yazidis are still holding out in camps for internally displaced persons. Some of those who have gone back are already making arrangements for a possible new escape. One resident speaks of “panic fear”. “If the government can’t stop Turkey, how can we do it?”, says another. Both report that large parts of Sinjar are still destroyed, hardly any help is coming and reconstruction is stagnating – especially in the south of the Sinjar Mountains, where hardly anyone is returning. “That has to do with the greater mix of the population. More precisely: with the distrust of the Sunni Arabs, whose villages are mainly located there.” The local doctor seems resigned. “The future is bleak,” he says. “This place will no longer be our place.”