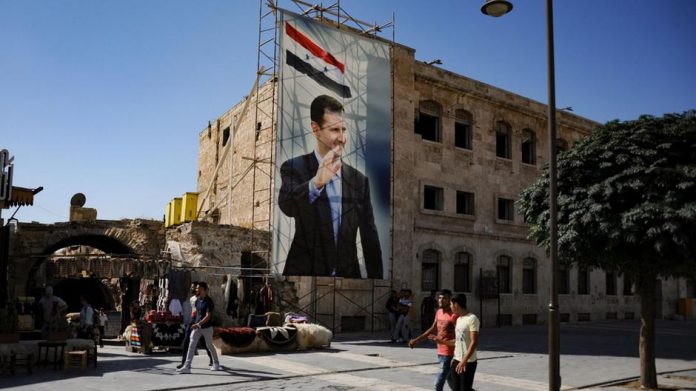 Abdullah Salloum Abdullah is the name of the first candidate for the presidential election in Syria, which is to be held on May 26th. He comes from the affluent neighborhood of al-Mazraa in the capital Damascus. This emerges from the registration with the Constitutional Court, which Parliament speaker Hammouda Sabbagh read on state television on Monday.

Even in Syria, noone knows the lawyer and former MPs. Just like the second applicant Mohammad Firas Yasin Rajjouh, an architect who was not admitted in 2014, he should not stand a chance, even if he manages to get the necessary 35 supporter signatures by MPs.

It is true that President Bashar al-Assad has not yet officially declared his candidacy. But anything but the fact that the head of state, who has been in power since 2010, can be confirmed for a further seven-year term, would be called a sensation. There has been no free choice in Syria since his father, Hafiz al-Assad, came to power in November 1970.

The candidacy of opponents of the regime to be taken seriously is already excluded from the fact that applicants must have lived in Syria without interruption for the past ten years. Ten years ago, Assad began to bloodily suppress the protests against his regime and displaced millions of people.

The violence can flare up again quickly

Also, the election will only be held in government-controlled areas. This excludes millions of Syrians who live in areas in the north of the country, occupied by Turkey and controlled by Kurdish militias, as well as in Idlib, the last rebel-held region, among which radical Islamist groups are the strongest forces. Syrians abroad can register to vote at the country’s embassies..

Even if the fronts hardly shifted in the past year, the civil war has not ended to this day. How quickly violence can flare up again has been shown again and again in Idlib, but also elsewhere. The United Nations speaks of a volatile and unpredictable security situation in parts of the country. The Russian Air Force bombs targets in the desert between Palmyra and Homs. Members of the Islamic State (IS) terrorist militia are said to have set up a training camp there and prepared attacks before the election.

Assad has recaptured the most important population centers with the help of Russia and Iran, thereby consolidating his rule. But that doesn’t mean a better life for the people in Syria: the economic situation is catastrophic. You have to stand in line for bread for hours, petrol and gas are scarce everywhere. The power supply keeps failing. According to the United Nations, 13.4 million Syrians are in need of humanitarian aid. 12.4 million are threatened with starvation – 4.5 million more than a year ago.

Bills are weighed, not counted

The most important cause: staple foods have more than doubled in price in the past twelve months, mainly due to a galloping inflation. While a dollar cost 1,000 Syrian pounds two years ago, it was last up to 4,700 on the black market – before the start of the civil war, the rate was 47 pounds per dollar. Food and bread are subsidized through vouchers, but the state has cut the allocations.

Larger purchases usually have to be paid for in dollars, which normal Syrians can only get on the black market. If someone pays for a car in local currency, the bundles with the 2,000 pound notes are now weighed, not counted.

Assad has repeatedly blamed Western sanctions against the regime for the misery. However, even the media and personalities close to the regime criticize the fact that rampant corruption is fueling the crisis, as do smuggling and the black market, from which mainly business people from the Assad region and militias benefit. This is well known in Syria and has been increasingly denounced on social media in recent months – the authors, including a prominent TV presenter, were immediately arrested by the secret services.

Syria has also been hit hard by the collapse of the banking system in neighboring Lebanon. Many business people had parked their foreign currency there – they were supposedly safer there than in Syria. Last week, Assad fired the head of the central bank. This had previously capped the maximum amount for withdrawals at the equivalent of around $ 570, thereby stalling the economy even further. Last Sunday, the central bank devalued the currency by half, officially the dollar now costs 2512 pounds. The government hopes that this will result in more Syrians sending foreign currency home for stabilizing the exchange rate.

US and EU do not want to recognize the election

However, a fundamental improvement in the situation can hardly be expected without political progress. The US and important European states are demanding a political solution to the conflict along the lines defined by the UN Security Council. These provide for free and fair elections in which all Syrians can participate. And a “political transition”, so at least a participation of the opposition in power.

They make this a condition in order to finance a systematic reconstruction of the country – an attitude that aid organizations like the international committee of the Red Cross are now criticizing. They advocate repairing at least the basic infrastructure.

Assad, however, has so far undermined all attempts by the UN Special Envoy Geir Pedersen to make progress at least in the constitutional committee convened with Russia’s approval. The election will not give him legitimacy from the point of view of Western states – the US and the EU have already made it clear that they will not recognize the result. In Syria, however, it should cement the balance of power.